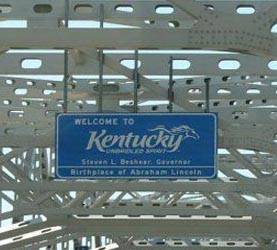 We’re off this morning for what figures to be a fun, though brief, copper-centric show in a place we certainly don’t get to very often, but which is said to have some extremely good BBQ.  This, however, is unconfirmed.

Anyway, we’ll be posting about all of the cool things we buy and sell and see and talk about (and eat) right here on Thursday night.

I was trying to think of the last time I visited the great state of Kentucky and concluded that it was while I was a senior in college on a spring break trip en route from Chicago to Daytona Beach in a Winnebago.  Those were the days, cruising along, acting like an idiot, occasionally stopping and sitting on the roof in beach chairs and eventually plowing into a parked car 5 minutes after we got to FLA.  But I digress.

This time we (me and a couple of dealer and collector friends) would arrive by airplane by way of Cincinnati, finally crossing the border into Kentucky in the hotel shuttle van (no beach chairs on the roof though) and pulling into the Drawbridge Inn at about 11 AM.

First reaction:  “Hey, this place looks like a gigantic Ground Round.”

Second Reaction:  “The interior seems to have been decorated in a beautiful and very contemporary way.  In 1973.”

But it’s actually quaint, and the staff is extremely friendly (but not in a weird way).

So we checked in, dumped our stuff in the room and met for lunch with a whole bunch of collector and dealer friends who joined us in waves at the table in sufficient numbers to freak out our waitress.  But she got over it and all was well, except that my corned beef sandwich was served with French (and not Russian) dressing on it.  But I’m not that picky, so I ate it anyway.

And we finished just in time to head into dealer set-up at 2 PM, fill the cases, walk around, see some cool stuff, schmooz, work out a couple of things with a few dealers and generally have a decent time in a mostly quiet room not yet open to collector attendees.

After a few hours of fun, it was time to head to the opening reception, which was stunningly crowded (hugely more so than at last year’s EAC show) and included a really good buffet dinner, an open bar, and a lot of conversation about coins, some of which was so shocking that it cannot be posted here in this blog.  Sorry.  But if you catch me at a show some time I’ll be sure to give you some of the highlights.

In all though, it was a blast, which led up to the individual “Happenings” – discussions about various coins and series held in smaller rooms from 7:30 to 10 PM.

I attended the colonial one, which was expertly hosted (as usual) by C4 President Ray Williams and included some show and tell items and interesting discussions about many things I previously knew little or nothing about.  So that was good.

After that, it was off to the bar for some more conversation with some collector friends that lasted pretty late into the night and ended just about 20 minutes ago, leaving me little time to type this blog before heading to bed and trying to get enough rest to handle what may very well be (if the reception was any indication) a very crowded and active bourse floor tomorrow.

Can you imagine staying in a hotel in which every single person you see (other than the waitress and some guy – presumably a staff member – painting a hallway) is a coin collector or dealer?  I can, because this is exactly what it’s like here, including at breakfast this morning, when I entered the restaurant and recognized absolutely everybody at every table.

So I sat with a friend who is a numismatic literature dealer for a half hour or so and then barreled into the bourse at 8:03 AM for what figured to be a big day with the same huge crowd that attended Thursday’s dinner.

But at 9 AM when the bourse opened to the public, just a few public trickled in, which had me wondering if all those people at dinner were really affiliated with the club, or were simply party crashers who liked the look of the buffet.

But my fears quickly subsided, as the room began to fill up until it was genuinely and completely crowded for much of the day with enthusiastic collectors and dealers buying a a lot of coins, an outcome which I would describe as ‘It’s fantastic!’.

I also had a chance to see some truly great stuff, including a dealer’s own collection of Machin’s Mills coins, some spectacularly high end 1794 Cents of the NFS (not for sale) variety, and the finest Twenty Cent piece I’ve ever seen in my life.

The fun continued right up until 5 PM, at which time I began the process of disassembling the elaborate CRO display, then loaded it in my bag and headed out to dinner at a deluxe BBQ place around the corner with a bunch of collector and dealer friends who all ate way too much while engaged in a spirited dialogue about coins and nearly every other topic known to man.

After which I headed back to the room to get organized for my flight, as I will be getting out of dodge first thing in the morning.  But I’m going to be honest with you:  If I knew it was going to be this good when I made my travel arrangements, I would certainly have stayed on until Sunday.  Oh well – we’ll remember that next year when we book the flights for the 2010 EAC show in Annapolis.

In the meantime, our next RR will be penned just a few miles from here at the Central States Show in Cincinnati in about 10 days from now.