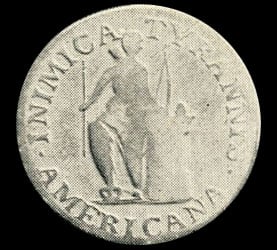 And we might have had our best ever example of that phenomenon recently, in a story that begins some years ago . . .

. . . there I was at the 2005 Early American Coppers Convention in Annapolis, Maryland, wife and kids in tow (indulging me for a quick coin-fix during our vacation to Washington D.C. ) efficiently cruising around the bourse floor, looking around, peering in cases, hoping to find something interesting.

Unfortunately, I didn’t find any coins I had to buy that day, but I stopped by literature dealer Charlie Davis on my way out and found a big box of old catalogs he was selling for a few bucks each.  Flipping through I discovered that I had most of them already at that time, but there in the bottom was a bright orange copy of the 1947 ANA auction catalog which I had never seen before: 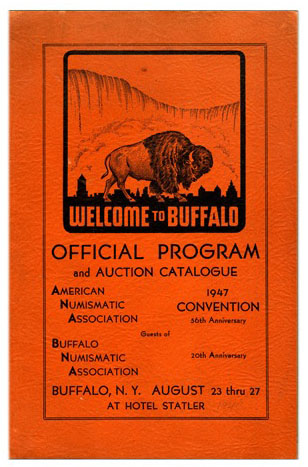 Quickly leafing through the pages I saw a slew of great rarities for my colonial census listings, knew I had to have it, bought it, and left even before my wife started complaining.

Studying it later I found a New England Shilling, two (TWO!) George Clinton Cents, A New York Eagle on Globe, a New Yorke in America token, an unc. 1799 Cent, a fantastic 1823 Quarter, and, among other august rarities, this item shown as lot #619: 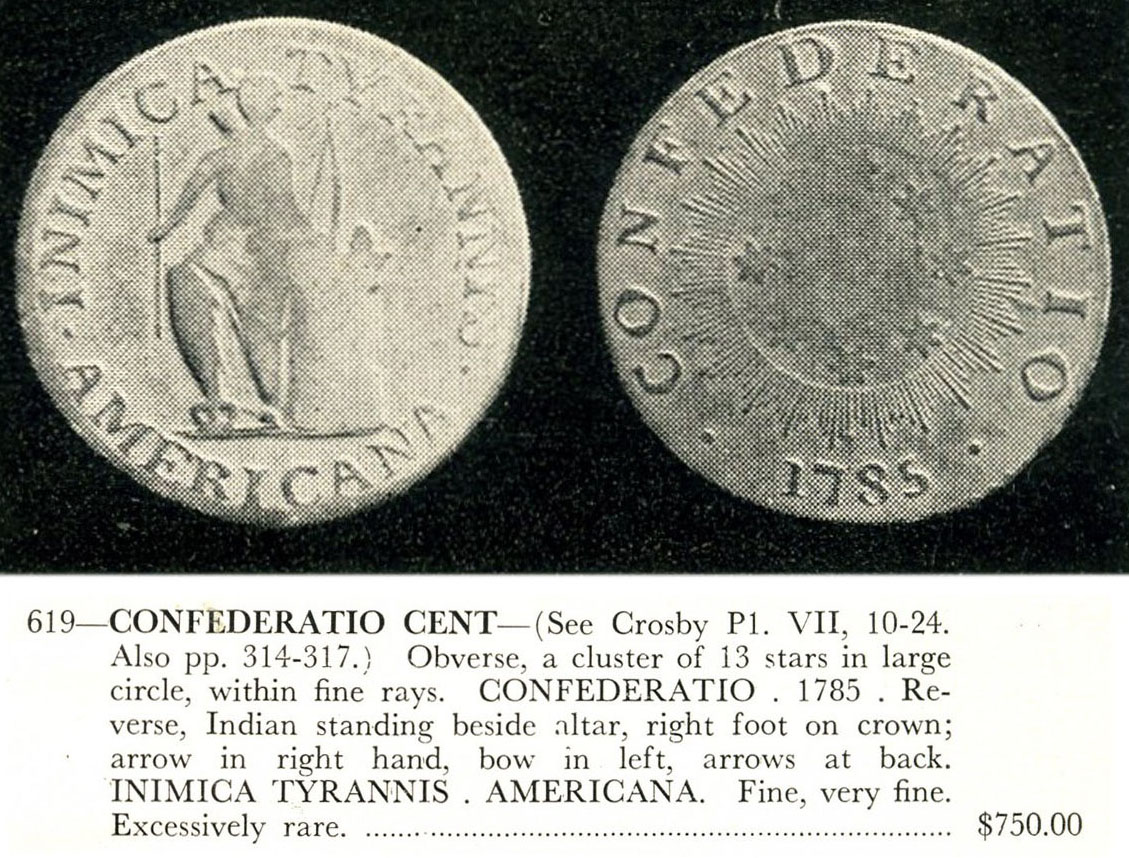 Now, that’s an extremely rare and totally cool colonial ‘speculative pattern’ conceived and designed by Thomas Jefferson and featuring an obverse depiction of Diana the Hunter (symbolic of freedom) trampling the British Crown surrounded by a legend which translates as ‘America Opposed to Tyranny’, and shown in Breen in two distinct types:

1.  The INIMICA TYRANNIS AMERICA obverse mated to the Large Circle of Stars reverse: 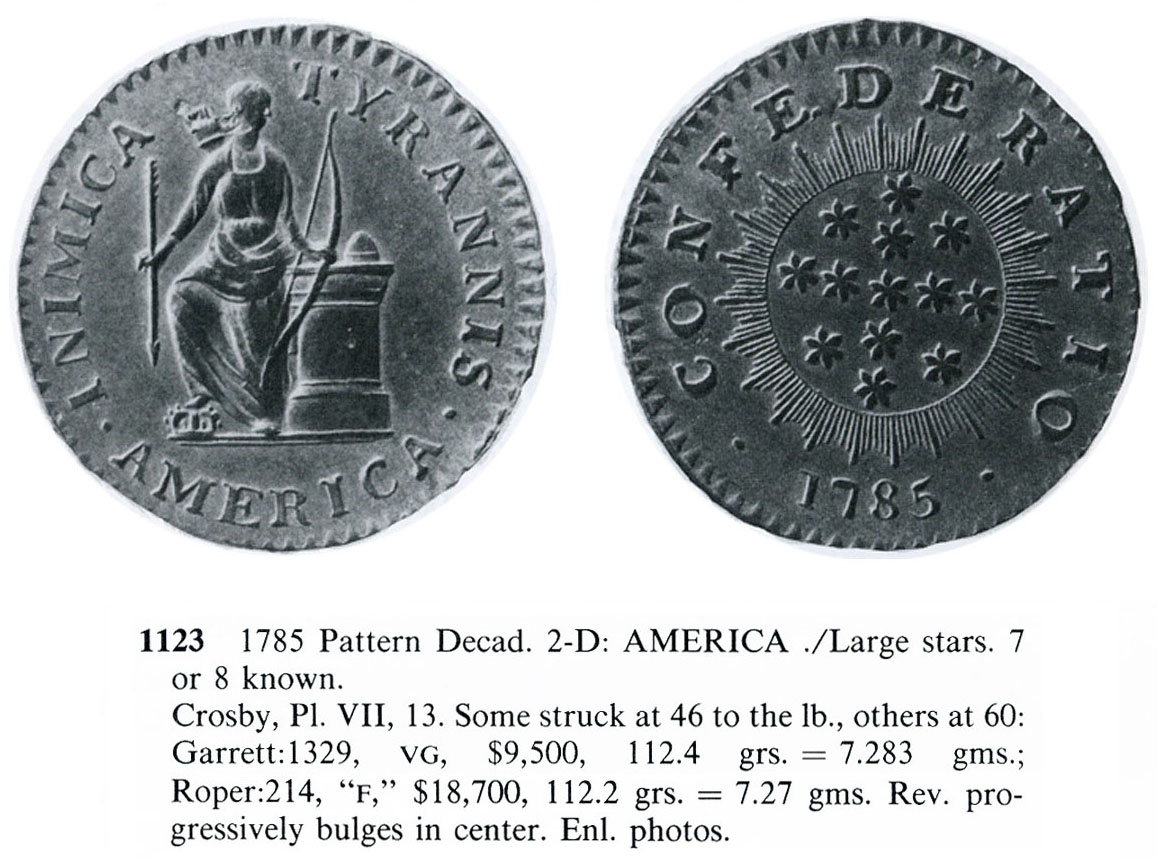 2.  The INIMICA TYRANNIS AMERICANA obverse mated to the Small Circle of Stars reverse: 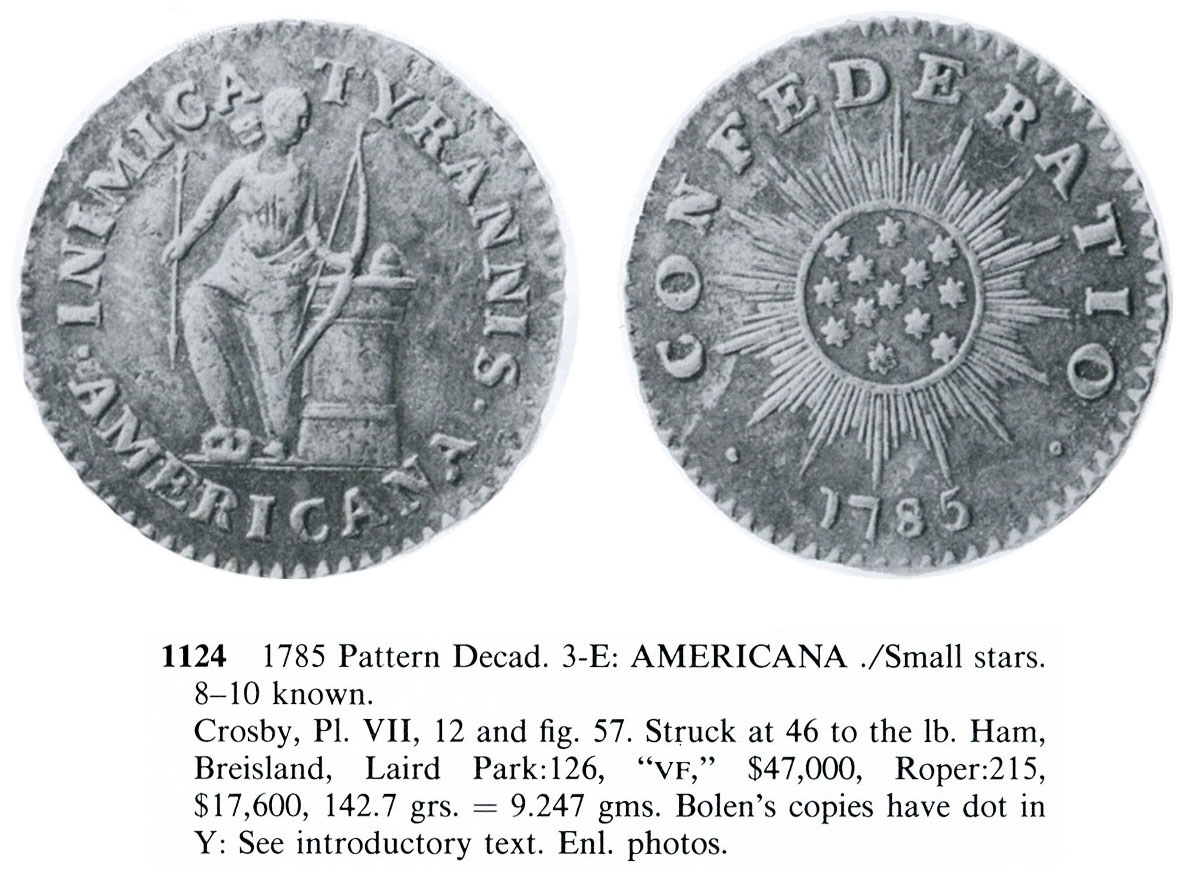 But this 1947 ANA coin was a muling of the AMERICANA obverse and the Large Circle reverse, a variant identified in Crosby’s 1875 ‘The Early Coins of America’, but not listed in any other subsequent reference, and not present in any other auction sale or collection I’d ever found.  Apparently the catalogers of the 1947 sale hadn’t see one either, as they called the coin excessively rare and estimated it at $750, which doesn’t sound like that much until you realize that the New England Shilling in the auction was estimated at $350, the aforementioned George Clintons were $600 each and the superb 1793 Liberty Cap Cent was pegged at just $250.

So of course I took note, scanned the listing (as I always do), added it to my census files (ditto) in a category all to itself and never really thought much about that coin again until a few months ago, when this piece showed up as lot #330149 in Stack’s-Bowers January 2014 Americana auction:

Now, at first I didn’t really pay much attention to that coin, as it was described correctly as a Bolen Copy (albeit an unusually worn example) as evidenced by the diagnostic raised dot in the top of the ‘Y’ in TYRANNIS on the obverse present on all Bolens, (though on this piece the dot is obscured by a long, seemingly intentional and vaguely familiar looking scratch through the obverse).

And then it occurred to me where I’d seen that scratch before (or at least a very faint trace of it, most noticeable where it crosses the first I in INIMICA and the Y in TYRANNIS)  – waaaay back in 2005 in that orange catalog in that picture of the “Excessively rare” variant.

So I put the images side by side and voilá, there it was:

And a coin which had been sold in 1947 as the real McCoy, and then seemingly disappeared from the market for 67 years, made its triumphant return by being dumped in a run of non-descript colonial copies where it brought all of $305.50 (and not the hundreds of thousands of dollars a real one would have commanded), which by any objective measure is about the biggest numismatic fall from grace I can personally recall.

So next time you see a fantastic and/or super rare coin in an old catalog, or in an internet photo, remember that it might not be all that in hand.

And while this example was certainly interesting news to me, I could not help but wonder about some of the other rare colonials in that 1947 auction many of which were, unfortunately, not plated, and which have always been considered real coins, but actually might not have been . . .