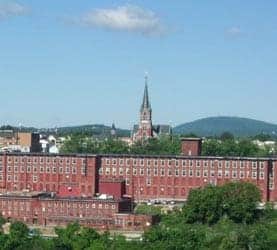 At every past iteration of the NHC&CE, your author would hop in the car, drive to NH on a Friday morning, walk the floor for a few hours looking for coins to buy, maybe make a sale or two, drop off something for another dealer, meet a couple of customers, have lunch and be back home in Massachusetts by about 1 PM.

But after doing that many times, and generally doing a fair amount of business with a modicum of effort, we decided to take the full 100% CRO plunge this time and actually take a table.

So there we were for Thursday afternoon’s dealer set-up, arranging said table, getting organized and then much to our surprise buying a dozen coins from a half dozen different dealers.

While also considering a fair number of expensive items one might not have expected to find here, including some deluxe early type and choice dated gold which (unless someone else buys them in the meantime) we might still spring for over the next couple of days. And then blog all about them and everything else that happens during what we think will turn out to be a pretty good show here in NH.

As has been stated here countless times through the years, one of our favorite parts of the coin business is the inherently unpredictable nature of it.

We literally have no idea what will happen at any show, who will attend, what they’ll bring, what we’ll sell and what cool stuff we’ll find in the cases of the usual suspects, offered by customers, or possibly rooted out of a junk box by your author.

And while there was not a great deal of junk box rooting here in Manchester on Friday (at least by me), the following unexpectedly unexpected things did occur:

We bought this from a usual suspect: 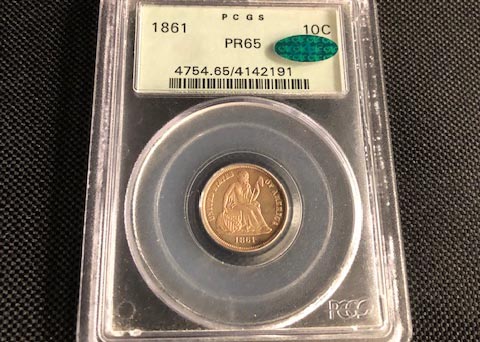 And this from an unexpected source: 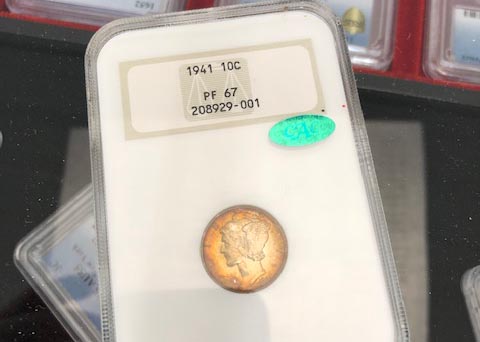 Which was still more predictable than the wildy toned commems we snagged from a world coin dealer (sorry, no pictures of those, yet).

We do however have a picture of this one from a different source in its original box (the first of these we’ve ever owned): 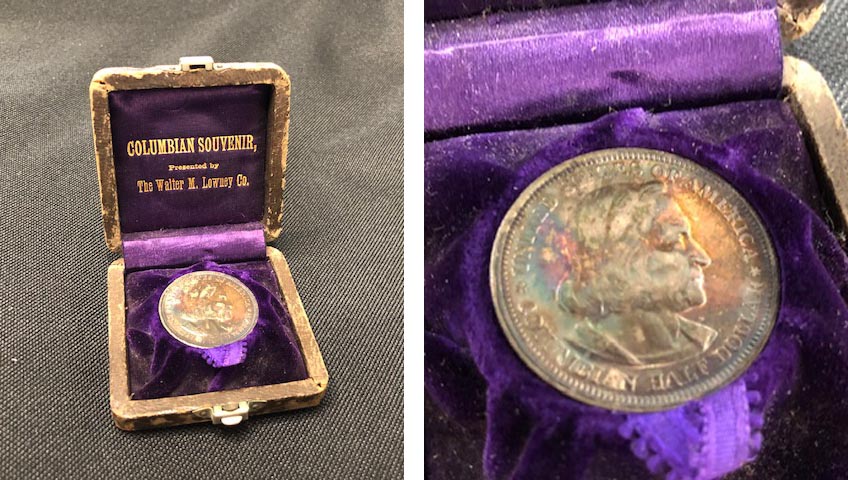 In and around which we managed to sell 7 coins to show attendees.

Get a wicked migraine from the super high-intensity interrogation lamps at the table across the aisle from us which was almost bad enough that I considered locking up and heading to a dark, quiet room.

But then recovered in time to eat a pretty decent hamburger served here on the bourse floor.

Before breaking my own lamp for the 2nd time in 2 days here at what has been an extremely rough lamp show so far.

Despite which we did some generally very good business before the crowd thinned out for good at about 5:30.

At which point we had some surprisingly good sushi at a nearby restaurant for about 1/3 the price of what the same meal might cost in Boston.

So despite a few hiccups we’ve enjoyed a pretty well attended and active show so far, and look forward to doing it all again on Saturday (except for the lamp problems, and the headache).

We are pleased to report that Saturday in NH went off without any lamp-related hitches, and no migraines whatsoever.  Allowing us to conduct unfettered coin business from start to finish and meet with many serious collectors who (unlike at most other events) mostly seemed to come at the end of the show instead of the beginning.

So there we were talking Pine Tree Shillings, high end Early Dollars and Vermont Landscapes at 2 PM on a Saturday when one might have expected to see families out pushing strollers and looking to buy some modern mint product or other (not that there is anything wrong with that).

But for us this was a pleasant surprise, allowing us to sell a few coins, hand out a bunch of cards, and direct some new people to the website before heading home in the mid-afternoon.

Where we could then write this blog summarizing this event as well worth attending (as usual), with enough sales, another 20-something NEWPs and some interesting new contacts that may lead to some business down the road.

But before that, we’ll need to unpack, repack and re-organize for the CSNS show from where our next EB will be posted as early as Wednesday AM.