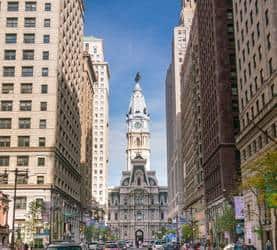 Has it really been since September of 2013 that we’ve been to a coin show in the City of Brotherly Love?  Apparently yes, at least according to our Road Report Archives which are, in our opinion, the best online record of such things.

So of course we are delighted to be heading back, this time for the always entertaining Early American Coppers Convention where copper U.S. and colonial coins rule the day, but not completely, leaving a small space for silver and gold U.S. coins and world coins to slip through (including at our table, where we will have an interesting representation of all, including a lot of neat new stuff no one has seen before).

So if you are in the area we’d encourage you to stop by the Double Tree on Broad St. in the heart of downtown and check it out.  But if you can’t make it, do not despair, CRO will be blogging all about it each and every day of this show (as we have been at every show for a decade now) right here in this space.

Starting bright and early on Friday AM.

Having carefully sorted our inventory and selected an ideal (we hope) 2-bourse case mix for the EAC show, we headed to the airport on Thursday for the quick flight to Philadelphia, arriving at the downtown Double Tree Hotel show venue at about 10 AM.

Where I was delighted to find that my room was ready for occupancy, it was not the dreaded room #10 on each floor directly next to and in between all the elevators, and was thus had a nice, quiet place to dump my luggage and show supplies before heading downstairs to begin the first order of business at any of these events: Schmooze in the lobby with other dealer and collector attendees, some of whom I saw in Chicago a week ago, but others I had not met up with since the 2016 EAC show in Charlotte a year ago.

Then had a quick lunch with a young fellow named Dave Wnuck where we were joined by Glenn Onishi of Goldberg’s who we don’t ever recall seeing at one of these shows before, but who came here to exhibit the lots for their upcoming June auction which will likely contain a lot of coins for us.

After which it was time for us to hit the bourse floor in the connected / adjacent / convenient Ormandy Ballroom, which sounds elegant, and kinda was. Where we found a well organized room, all of our cases, lamps and electrical connections ready to go, allowing us to set up and start the proceedings ASAP.

Which we did, having everything in the cases a few minutes later, including this macabre display we decided to trot out at this show: 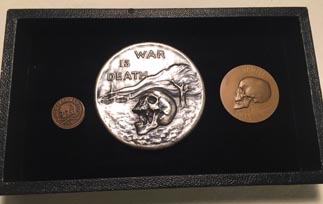 And selling our first coin – a silver one, ironically, but not unexectedly – shortly thereafter.

And then began the process of scouring the room looking for interesting coins at other tables which ranged from fully set up to partially set up to “Hey, the guy isn’t even here yet”. Finding some cool coins, but amazingly (shockingly, even) not buying anything yet, a situation which will surely be rectified on Friday.

Also interesting here: The variety of lovely Half Cent and Large Cents of all kinds owned by club members on display (i.e. NFS) in various cases around the room, including an incredible run of gemmy Lord St. Oswald Liberty Cap Cents put together by the Liberty Cap Foundation: 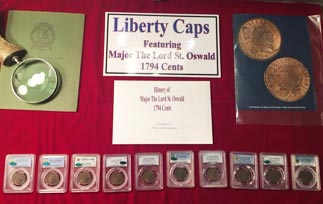 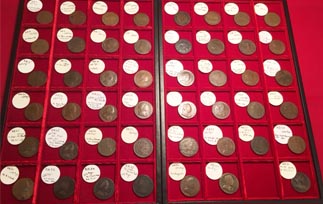 Plus a bonus sighting of numismatic literature dealer Charlie Davis who we were pleased to see smartly attired in a CRO hat: 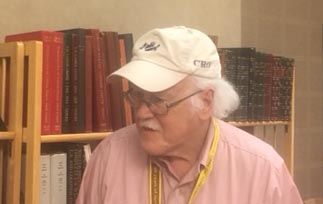 Then, before we knew it, it was 5 PM and time for the start of the annual EAC reception, where a few hundred of us ate, drank and talked coins in a casual setting which was wonderfully organized but could have benefitted from some additional chairs. So if you come to this show next year, you might consider bringing one. I’m just saying.

After which we migrated down to the hotel bar and talked more coins until late before finally turning in after what had been a loooong, tiring, entertaining day and a good start to what is shaping up as another great EAC show.

Which will continue on the bourse floor early Friday, and then be described here in full detail on Saturday AM.

In high-velocity, super-productivity mode on Friday morning, your author answered email, updated the site, wrote Thursday’s RR, went to the hotel gym, had a quick breakfast on the M level balcony and then made my way to the show where I found about half the other dealers already actively engaged in numismatic commerce.

So I jumped right in, first by pricing and finalizing a neat Half Cent deal begun yesterday, and then welcoming a steady procession of visitors to the table, many of whom were sporting previously acquired CRO hats, like this: 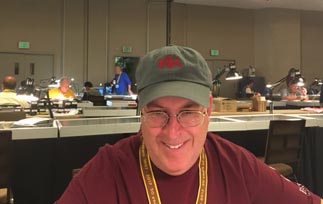 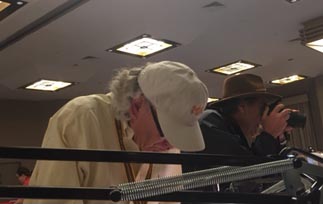 And this seasoned numismatist who daringly left the decal on his bill like the kids are doing these days: 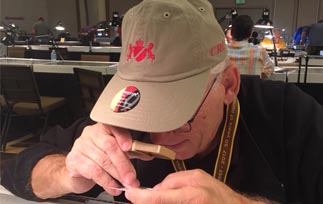 Selling coins to hatted and non-hatted attendees alike in what has quickly become one of the best EAC shows we’ve ever had on the selling side, which I attribute to several factors:

Our efforts to find cool coins perked up too, with the aforementioned Half Cent deal and a surprisingly wide variety of other colonial, U.S. and world coins of all kinds, slabbed and raw, ranging from a few hundred dollars up to the mid 5-figures.

When all of a sudden it was 4:50 PM and they announced the bourse would be closing at 5, so we packed up and headed out to a fabulous dinner at a cool Italian Bistro in a gentrifying neighborhood nearby with some dealer friends and an industry bigwig (and also the elderly ladies at the next table, who were seated so close to us in the tiny restaurant that I think one of them snatched the roll from my breadplate and put it in her purse).

Before returning to the hotel to schmooze in the lobby and hear about how some collector friends had visited the Library Company of Philadelphia a few blocks away, where they stumbled upon this interesting exhibit gifted by a fellow named Benjamin Franklin some years earlier (photograph courtesy of Nathan ‘The Hawk’ Markowtiz): 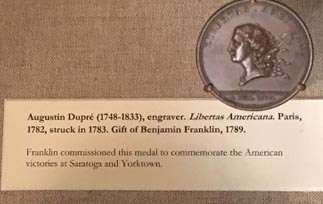 How cool is that?  Very.  Alas, the Library Company is only open Mon-Fri, so your author will have to wait for the next trip here to see it.

While I doubt anything that heady will show up on the bourse floor on Saturday, one can hope.  And if it does, or even if doesn’t, you can read all about it here on Sunday AM.

I’ll admit that there were times Saturday when the activity slowed waaaaay down and the bourse floor resembled, well, the bourse floors at some other EAC shows in leaner years.

But then it got really good again, with some additional sales at the table of U.S. and colonial coins, another 8 interesting purchases from a variety of sources, and one gigantic Brontosaurian near miss in the form of a fantastic colonial coin which casually walked into the door late in the afternoon, wafted under your author’s numismatic nose, stayed in limbo for a few minutes and then left as unceremoniously as it arrived.

Of course I wanted to buy it, and made a very serious offer, and then hoped the owner would sell it, but that did not happen here. And while I could say this was just another coin that got away, I’d prefer to think that it simply hasn’t happened yet, and that my phone is going to ring any minute now. Hey, it might.

Still, even on that (temporary!) down note, this was an excellent EAC show in every way other than its self-imposed all-too-brief duration (since I’d have stayed for Sunday if I’d have known what was going to happen here).

But of course that’s not possible, since we have the overlapping local Devens show tomorrow, I have to go get the dog in the afternoon, customers to see on Monday and an early flight Tuesday morning to the Central States show.

And of course blogs to write, including our next RR late on Sunday recapping whatever happens at Devens. Which might not be that much, but you never know unless you go there and find out.  Right?  Right.