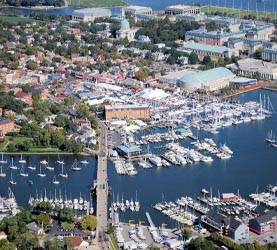 This is how Day 1 was supposed to begin:  Wake up at 3:30 AM, finish packing, have a leisurely breakfast, make sure I haven’t forgotten anything, wait for my cab to arrive at 5 AM and then calmly drive to the airport for the first flight to Maryland for the start of the EAC show.

And this is what actually happened:  Wake up at 5:06 AM to the phone ringing, answer it and realize that it is my cab driver calling from my driveway and wondering where the heck I am. I wondered too – until I realized that my alarm had apparently not gone off, and, before I had even gotten out of bed, I was 96 minutes behind schedule and would need some sort of Herculean numismatic effort to get myself dressed, packed, organized and to the airport in time to catch my plane.

Amazingly (and although I think I forgot a bunch of important stuff in the process), I made it, actually getting to the airport gate with 7 full minutes to spare.

And while I thought that was pretty impressive, this achievement would have seemed more meaningful if the flight didn’t then sit on the tarmac for 3 hours due to fog in Baltimore (it did). But, of course, unexpected delays like this are the reason why your author books such early flights to begin with.

Anyway, I would eventually make it to Annapolis, arriving at the cozy show hotel just in time to have lunch with a dealer friend and then stroll casually onto the bourse for dealer set up at a little after 2.

Inside I would find a relatively small room (at least by the standards of the major shows on the circuit), with a total of 61 dealer tables. Of which CRO would occupy spot #14, a lovely location which, surprisingly, backed up not against a wall or other rigid surface, but instead to a door to some sort of storage closet which would, of course, need to be opened every few minutes disrupting my otherwise extremely artful arranging of our inventory.

I did get it done though, then walked around to see what everyone else had.  And there was some amazingly cool stuff, including some fantastic coins brought for display at various tables:

There were also some interesting things for sale, and I was able to buy a few of them while considering others for Friday. And I did sell a few coins too, all of the colonial and esoteric variety, in what was a pleasant and relaxing afternoon.

And then before I knew it was time to head down to the EAC Reception, featuring a nice buffet and a shockingly large and boisterous crowd that had me wondering why all these people weren’t on the bourse floor earlier. Until another dealer reminded me that set-up was for dealers only. “Oh, that explains it”, I thought to myself while eating what I’m pretty sure was a scallop.

It was fun, and that huge and exuberant crowd made me feel like Friday might be extreeeeeeeeeeeemely active, since it seemed to me that there were more people at the reception than could possibly fit onto the bourse floor (unless they set up a couple more tables in that storage closet, which I do not expect).

With luck, a lot of these people will have come looking to buy or sell coins, and if they do, I will write about it right here in tomorrow’s RR.

The alarm in my hotel room worked flawlessly on Friday, successfully waking me up exactly as scheduled and thus giving me plenty of time to write yesterday’s blog, answer a bunch of emails and get organized before heading down to the bourse at about 9 AM.

And it was pretty crowded and busy right from the start.

Which for me meant seeing lots of dealers and collectors at the table (several of whom I had never met before in person), buying some very nice things (bringing our total haul of new coins so far to a surprising 21 pieces), selling a bunch more colonials and esoteric pieces, doing one significant trade, and generally having a lot of fun in the process.

In fact, the only negatives I can think of were the unimpressive lemon yogurt I had for lunch, and the fact that my table lamps kept detaching themselves at the worst possible times.  Neither of which were a big deal, really.

And, in the spirit of ending the day on a high note, I made the last sale at about 4:55 PM, a scant 5 minutes before the bourse closed and they unceremoniously booted us all out.

Which was ideal timing, since a bunch of hungry dealer friends and I almost immediately piled into the rental car for a trip to a restaurant rumored to have (and I quote) “the best crab cakes in Annapolis”.

Which sounded great, except that I don’t like crab cakes, and none of us had any idea how to get there.  Fortunately, we had a great plan, which was to simply drive around slowly until we found it.  And, amazingly, we actually tried that for several minutes before we gave up, pulled over and your author climbed out to ask some locals if they knew where it was.  Which they did –  directing us about 5 miles down the road, over a bridge, down a long road and to a “non-descript house”.  Which, much to my surprise, turned out to be absolutely correct.

Also correct were the earlier rumors, as this place was extremely good (though, for the record, I had the Cajun Rockfish).

After which we headed back to the show hotel where a few of us would attend a talk by numismatic rock star Q. David Bowers, while others (me, for example) would head back to my room and collapse in a heap.  But not until I finshed this blog.

In doing so, I can now get up a little later on Saturday and be slightly better rested for what I think will be another good day on the bourse floor, with the anticipated arrival of some of our local collector friends.

Whatever happens, you can read about it right here no later than Sunday AM.

As noted here yesterday, I was thinking that Saturday might be another busy and active day on the bourse floor, with lots of customers, exciting new purchases and almost non-stop writing of long and detailed invoices.

But while commercial activity was slow, social activity was hopping, as I had a lot of nice conversations with a lot of different collectors and dealers (who were apparently similarly unencumbered by buying and selling activities).

One other interesting thing I did get to do was peruse a new and very detailed New Jersey copper census compiled by a dealer friend which listed every NJ variety by Maris number, attempted to enumerate and rank the best specimens and reminded me, once again, that this has to be one of the most competitive numismatic specialties extant.  Not that there is anything wrong with that if the participants enjoy it, but I’ve often felt that it does make the competition among PCGS Registry collectors (in any category) look relatively tame by comparison.

Anyway, in all, it was a fun day and a good show (as it has been, for us, for the last several years).

Which left just the ceremonial packing up and putting away or our show supplies, so I could lug them to dinner with a dealer friend at the unbelievably mediocre hotel restaurant (in which the only thing worse than the food was the service).

Then I zipped off to the airport so I could get home and spend some time with the family before heading off to the Central States show.

From where our next RR will be posted as shockingly soon as Wednesday morning.