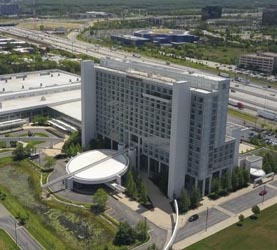 What could be better than some exciting midwestern numismatic action?  I’m glad you asked that question, and I am delighted to answer it right after this colon:

Combining the CSNS show with the former Chicago Coin Expo / Chicago International Coin Fair which used to be held in downtown Chicago / Rosemont, Illinois just two weeks before this show.  And while those were fun events during which Team CRO did some good business, it was pretty taxing and not all that efficient to fly to Chicago twice in a 2 week period to attend both (though that was of course preferable to turning it into one continuous 3 week event like some of the other guys did).

So now we’ll be in Schaumburg at the comfortable Renaissance Hotel venue for one concentrated week efficiently buying, selling, trading, grading and schmoozing about U.S. AND World coins from our deluxe table, and bidding in the U.S. AND World coin auctions like crazy.

And then blogging all about all of it right here in this space each and every morining of the show.

After a fitful night’s sleep in an extreeeeemely small bed in a room which was alternatingly way too cold or alarmingly hot, Team CRO was up early for an invigorating power walk around the hotel grounds during which we saw two (2) rabbits and seven (7) other coin dealers.

Followed by a quick breakfast in the hotel lobby, some fast blog writing, auction prepping, supply arranging and finally bag schlepping over to the not-all-that-far-away convention center portion of this complex on the left side of the photo above.

Where we obtained our show credentials with some difficulty (since they could not find the badges that begin with the letter ‘A’) and then joined the impatient queue of show attendees all lined up outside the bourse room door looking at their watches.

Which they would be doing for a while, since it was by then 8:33 AM, and because none of us were show sponsors, we could not get in until 9.

But eventually we did, storming the bourse, arriving at our table 9 seconds later, finding everything in good order, cases and lamps in the quantities we had requested, and then setting up faster than anyone else (with the possible exception of dealer friend Joe O’Connor, who we later learned brought only 12 coins with him to this show).

And then began scouring the bourse for cool coins, visiting all of the usual CSNS suspects, as well as all of the world dealers set up here for the first time this year.

Returning intermittently to the table to work with other dealers and fill out grading forms during what was, essentially, a 6 hour dealer set-up period during which the only public attendees in the room were the few who had paid the lofty Early Bird entry fee to get in before the 3 PM ‘regular’ opening.

Resulting in a pretty quiet first day fairly typical for this event, but one in which we did just enough buying and selling to feel like something good (or possibly very good) would be happening here over the next 3 days.

Followed by a nice dinner at a nearby Chinese restaurant with some collector and dealer friends before calling it a night after what had by then been a loooong, tiring, 19 thousand step day.

But we’ll be ready to do it again tomorrow, this time with the public and the start of the various Heritage U.S. and world coin auctions of high interest to us combining to ramp up the activity level here by a factor of about 12 (or possibly 13). We hope.

And if it does, or even if it doesn’t, we will blog all about it right here in this spot in just about 24 hours from now.

In an ideal world, Team CRO would have completed all of our prep work for Thursday’s auctions by Wednesday evening, thus allowing us to fully participate in the show unencumbered by auction catalogs, price research and bid entering.

Unfortunately, and despite going to bed late and waking up early as always, we just ran out of time. Meaning that your author would begin Thursday camped behind the table battling a balky internet connection poring through the day’s U.S. and World coin lots of high interest, entering all of our bids and then letting the chips fall where they may.

And then forgetting all about it and instead variously racing around the room or working at the table, buying a group of US coins here, a cool world coin there, selling a few things to various collector attendees and generally having a decent day in a room that was never really crowded or buzz-filled.

We had our moments though, selling a cool, new toner, buying a super-fresh deal of old holdered copper from a collector attendee and then, briefly, thinking we had hit the motherload when a collector walked up to the table having been directed to us by the aforementioned Joe O’Connor with some high end Latin American 4 Reales. Alas, they turned out to be more in the shipwreck category that we don’t really deal in, so we instead directed him on to a few of the guys who specialize in that area.

Continuing on that way for the rest of the day, with some successes and some near misses in pretty much every category. Including on our auction bidding, with most of the highly sought after coins running away to levels we did not want to pay.  Not really surprised though – as we knew the only way to buy some of these was to really, really want them, and to possibly set new record prices for the grades in the process.

With our last purchase of the day a lovely 8 Reales at about 5:50 PM, and the symmetrical last sale literally 30 seconds later in the form of a super choice Early Dollar.

Followed by dinner with some dealer friends at the hotel during which we were variously upbeat, such as when discussing David McCarthey’s brilliant new business idea for a coin buying app called “Dinner Bidder” (since that’s when all of us seem to use these to try to buy coins in auctions, including your author right then).

Offset by moments of bewilderment, such as when we noticed the astronomical prices some of the lots had brought in the day’s auctions. Including a 1964 Kennedy 50c SMS in SP67 at $108,000 – one of a number of recent mega-results on 20th century coins we’ve all seen. And while we were all sure that is a real fine item, we just had a hard time getting our collective heads around that number knowing what kinds of fantastic and genuinely rare coins we can all buy for (sometimes tiny) fractions of that price.

But that’s OK, numismatics is a big tent and there is room for all of us.  And if we were really smart, we’d forget about that Dinner Bidder thing and instead get to work figuring out how to consign coins like that and take advantage of what is apparently some incredible demand for such items.

After which your author headed back to the room to follow along with the tail end of the world auction with one eye while monitoring the NFL draft with the other.

And then finally calling it a late night in anticipation of what we hope will be a Friday that resembles what we encountered at the ANA a few weeks ago, with lots of collector attendees and with them buying and selling opportunities aplenty.

With whatever happens to be reported right here on Saturday AM –

Team CRO burst out of the Renaissance early Friday AM excited for another power walk around the hotel grounds, discovered it was extremely cold, windy and unpleasant out there and immediately went back inside.

Instead traipsing around the long carpeted corridors to the convention center for a while before having breakfast in the lobby.

Then heading on over to the show for what we hoped would be a busier, more action packed day.

And to some extent it was, allowing us to buy a couple of very cool colonial, U.S. coins and world coins and sell a decent number of low to mid-priced items.  But things never really took off to the degree that we had hoped.

Which is more or less how the auctions went too, as CRO snagged a few lots here and there, but got swamped on a few world coins of high interest.  Oh well.  We’ve got to set limits, and in some cases those limits were exceeded by a factor of 2 or 3x.  Still, that’s easier to accept than to bid A$73,500 on a coin which hammers to someone else for A$74,000 (which is what actually happened to us in a recent Australian auction).

On a more positive note, we got some good grades here on well deserving coins which will now be ready to unleash to the market.  Possibly as early as Saturday here in Schaumburg if a few of our local regulars make a late CSNS appearance.

And that is certainly possible, I guess, though we never know how these events are going to go until we see for ourselves.

As we will be doing all day here Saturday before catching a late flight home, unless we are snowed out (which is frankly not something I expected to be typing on April 27th).  But that is indeed the forecast here.

So we’ll hope for the best meteorologically, look forward to what today might bring numismatically, and then blog all about all of it in our CSNS wrap up to be posted on Sunday AM.

When packing prior to departing for the CSNS show last week this is something I did not consider: “Bring snow pants for sledding.”

But there we were on Saturday afternoon with snow falling in Chicago like in one of those Budweiser Clydesdale ads trying hard to remember the last snowstorm we encountered in late April. Couldn’t think of one though (at least in this hemisphere).

And while we weren’t talking a snowman-building depth accumulation here, it was cold, windy and more than sufficient to wreck a lot of people’s travel plans, including ours, with an early AM text from the airline informing us our Saturday evening flight was cancelled.  Meaning we would be spending another night in Chicago, flying home first thing Sunday, and, in silver-lining mode, totally focused on the show here Saturday.

Which proved to be slightly better than the previous few days here, with more visitors to the table, decent enough sales, more purchases, a pretty neat-trade proposal which might yet happen, another couple of good grading results and generally enough stuff to keep us busy until the room really thinned out at about 3.

At which time we headed out to an airport hotel, made one last, late phone sale while in the check-in queue there, met the similarly delayed boys from Eye Appealing Coins (who were at a different airport hotel) for dinner and then finally called it a night in anticipation of another one of those 3 AM wake up calls so we could catch the first (and only) available flight back home.

From where this RR is now being posted.

But it will be a pretty quick turn around here during which we’ll need to ship some coins to customers, sort out all the new coins from the show, and others which have arrived here during our absence, send shipments to CAC, and to grading and then hit the road again for the EAC show in Dayton from where our next RR will be posted in just a few short days from now.