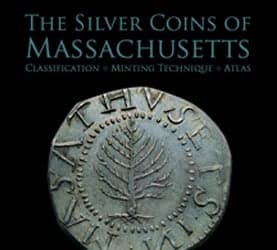 We are pleased to present this discussion and explanation of the new Salmon classification system for Massachusetts Silver Coins written by Dr. Christopher J. Salmon, author of the superb book “The Silver Coins of Massachusetts”.

Massachusetts silver coins were the first native issues of the British colonies in North America and, as such, command a priority of place among collectors and numismatic historians. They are prized and desired for their beauty and charm and as tangible links to the material culture of Puritan New England.

For context, it’s helpful to recount the history and design of the various classification methods for the coins, with reference to their virtues and limitations alike.

Sylvester S. Crosby wrote the first comprehensive study of the Massachusetts Silver Coins in his 1875 landmark work The Early Coins of America and the Laws Governing Their Issue. He classified the coins logically (and ingeniously) by naming their respective obverse and reverse dies, with the ordering of the varieties reflecting chronology and the individual die designations reflecting in due degree evolutionary changes as engravers modified and recut deteriorating dies to yield new ones.

Crosby’s system was widely accepted as the standard until the superb American Numismatic Society Monographs on the Massachusetts Silver Coinage by Sydney P. Noe appeared in the 1940s and ‘50s.

Noe revised the Massachusetts silver coinage classification to include new discoveries and reflect improved chronology and ordering, but departed from Crosby’s approach of naming an individual variety by its obverse and reverse dies.

Instead, each variety – each pairing of dies – was given a single number. Each series was given a single list without regard to denomination. Crosby’s already simple and elegant system was further simplified, and this led to problems.

Einstein is often quoted as saying “make things as simple as possible . . . but not simpler” because if you devise a theory that is too simple it no longer accounts for all of the data. You lose information and the theory cannot be applied in all cases.

So it was, too, for the Noe Classification: Noe aimed to list the coins as simply as possible, but he went too far and oversimplified the already optimally reduced Crosby system. Information was lost and the system could not be applied properly in all cases. And there were other problems as well.

In abandoning Crosby’s practice of naming a variety by its obverse and reverse dies Noe’s system is silent regarding the existence and degree of relationships among varieties.

Simplifying each series (e.g., the Pine Tree coinage) to a single listing results in loss of chronological perspective in comparing coins of different denominations – different subseries – to one another.

In Noe’s system simple differences in die state are often elevated inappropriately to the status of variety. Numismatic scholar and cataloguer Michael Hodder saw that there was often confusion in discerning die states, creating “chaos” for collectors, and he believed that Noe classification numbers given to intermediate varieties were often “absurd.” He is certainly correct. Imprecision and complexity arose in the Noe classification and got worse over time. Noe’s original list was expanded with the addition of intermediate varieties with “Noe numbers” that are confusing and complicated.

For example, in 1968, Walter Breen reported an Oak Tree threepence with a Noe 27 obverse and a reverse closer to the Noe 26, and he named it “Noe 26.8.” Richard Picker later subdivided Breen’s discovery into two separate varieties (differing in reverse die state). Picker also changed the name of the new variety. He didn’t like Breen’s “26.8,” because, after all, the coin had a “27” obverse – and why name a coin with a “Noe 27” obverse Noe 26.8?

This appears to make sense at first, except for the fact that Noe’s classification was not intended to name a coin based on which dies were used to strike it. Nonetheless, Picker named his two varieties “Noe 27.1.1” and “Noe 27.1.” The multiple decimal points are confusing enough, but it’s actually worse than that.

In Picker’s “27.1” and “27.1.1” each “.1” is like to a negative number. Each “.1” is a step backward in variety and a step backward in time. The Noe 27.1 comes before the Noe 27, and the Noe 27.1.1 comes before the Noe 27.1! More than simply inelegant, this is confusing (nonlinear . . . achronological), counterintuitive, and a recipe for classification disaster. As we’ve already seen, and as pointed out correctly by Picker, Breen’s classification of Noe 26.8 was also unsatisfactory in seeming to name a variety as a subtype of a coin it did not resemble.

None of these results are the fault of Breen or Picker: they’re due to the rigidity of the Noe system that does not show relationships among varieties and does not allow easy inclusion of new varieties.

The Noe 27.1.1 and Noe 27.1 coins also expose another flaw in the Noe taxonomy: the classification of die states as separate varieties. Hodder observed that in separately designating die states one might just as well identify “27.1.1.1, 27.1.1.1.1, and so on.” In any case, it’s often difficult or impossible to identify exact die state for a 1g silver piece in F or VF, or one that’s flattened or damaged as these coins often are.

This is entirely analogous to the early and the (again, much more common) late reverse die states of the Georgivs Triumpho token from the late Federal Period. These coppers are not catalogued separately from one another, except to mention that they differ in die state, and there is no confusion among collectors. This is not to say that die states are not desirable or collectable as such! Specialists are well aware of the eary and late die states. Choice examples of the scarcer early die state Georgivs Triumpho command a substantial premium in the marketplace. In a similar way, most Massachusetts Silver specialists will wish to acquire both early and late die states of the 7-E large planchet Pine Tree shillings.

Because of the unwarranted designation of die states as varieties and the strict rigidity of the terse Noe classification the new classification returns to a traditional Crosby model. This solves the problems of confusing, disordered, and inappropriate taxonomy.

Obverse dies are denoted by a number, with minor changes by a lower case letter.

Reverse dies are designated by a capital letter, with minor changes by a lower case number (a lower case Roman numeral).

The minor changes are not differences in die state. They are changes produced by minor but noticeable re-engraving of dies.

Let’s look at a few examples of how the new classification system is applied.

The 2-C and 3-C are consecutive varieties in the large planchet Pine Tree shilling subseries. The tree of the 2-C obverse was completely replaced to yield the new tree of the 3-C variety (note that the lettering is completely unchanged!). The significant alteration of the obverse die is indicated in the change in number from “2” to “3.” The reverse dies of these two varieties are the same, without any intentional change by the coiners, and both have the “C” reverse designation.

If changes in dies are minor, the primary die designations are simply modified. Minor changes in obverse dies are indicated by lower case letters. This is shown nicely by three consecutive varieties of Oak Tree sixpence: 2-B, 2a-B, and 2b-B. Each has the same reverse die (designated with a capital B), but differs slightly – though clearly – in their obverse dies. The 2-B has a defective and quite weak first S in MASATHVSETS. This flawed letter was re-engraved to give a blundered, backward first S of the 2a-B variety. This errant character, in turn, was recut to yield the forward-tilting first S of the 2b-B variety (the adjacent “A”s were also a bit modified in the process). These three varieties differ in the appearance of their respective first Ss, representing minor differences, yet quite distinctive changes of discrete varieties. The minor change at each step is indicated by the lower case letter of the obverse die designation. The classification captures the chronological progression in a very logical manner.

The Oak Tree twopence varieties are helpful in illustrating how subtle reverse die changes are accounted for and in showing the intrinsic flexibility of the Crosby model used in the new system. All Oak Tree twopence varieties derive from an original single pair of dies, with the reverse die being recut over time and the obverse die remaining stable. Two basic varieties are recognized in the new classification: 1-A (“small date” of “small 2” variety) and 1-B (“large date” or “large 2” variety). Some observers have recognized up to 13 varieties of Oak Tree twopence, but almost all are only variations in die states. Otherwise, reverse die cutting is seen, especially for the characters of the date (but not limited to this).

The simple listing of two varieties is consistent with the opinions of Hodder, Norman Stack, and others. If one wishes to designate subtle reverse die varieties – or if this is the consensus desire among specialists – then this can be easily accomplished within the new system: either by attaching a lower case Roman numeral or by mentioning die state . . . or some combination! All variants can thus be accounted for without difficulty. The system is flexible and accommodating.

The different denominations are listed and numbered separately and independently in the new system. This is a complete departure from previous classification systems and is critically important. It avoids the chronological inconsistencies seen in the Noe classifcation.

In both the Oak Tree and Pine Tree series, Noe lists the fractional subseries along with the shillings in a single sequence. The result: a single listing for all denominations, with order and numbering that do not reflect overall chronology.

For example, the earliest Pine Tree threepence was most likely produced around the same time as the earliest large planchet Pine Tree shilling, based on style and the beads adjacent to the tree trunk . . . but the shilling is called “Noe 1” and the threepence “Noe 34”!

Classifying all denominations of a series in a single list also makes the Noe classification extremely rigid and prevents proper inclusion of new varieties. This is exemplified by the “Noe 38” Pine Tree shilling. It was discovered by Vlack in 1967. He was unable to attribute it, but Picker recognized that it was a previously unknown marriage of two known dies, namely Crosby obverse die 22 (of the Noe 17 variety) and Crosby reverse die M (of the Noe 23 and 24 varieties).

Because of the rigid constraints of the Noe system, there was no way to list the new variety with the other small planchet Pine Tree shillings. It was therefore added all the way at the end of the Pine Tree listing . . . after all of the shillings, all of the sixpence, and all of the threepence. This was a striking, but unavoidable discontinuity in classification.

In the new system it is listed logically and properly with the other small planchet Pine Tree shillings – and in the same manner that it would be if it were discovered in 2013 . . . or if it had been known since Crosby’s time!

The new system, by its design, can easily accommodate new die combinations in a predictable manner, and in ways that the Noe system can’t. No special name to invent. No exceptions to the rules. No problem in placing similar coins together.

We have included here Noe-Salmon concordance tables so that one can see the translation of familiar Noe die varieties to the new Salmon varieties.  Note CRO will be using both systems on all Massachusetts Silver coins in our inventory on this site going forward:

Chris’ book, The Silver Coins of Massachusetts, is available through the American Numismatic Society website, and ANS members will receive a 30% discount on their order.

Note also Chris and CRO are always interested to talk about Massachusetts Silver Coinage – you can reach Chris at rockerpress@gmail.com, and you know where to find us!