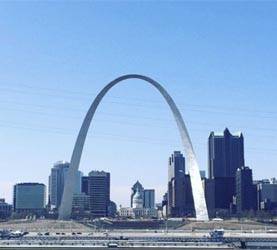 I don’t have official figures, but I’m guessing this was an all-time EAC attendance record. The bourse floor, often reminiscent of a deserted hotel lobby at 2 AM during past EAC conventions, was bustling from nearly the beginning to the end of each day.

Why was this particular convention such a draw for collectors? I can think of several reasons:

1. It was in the middle of the country, and thus relatively easily accessible by car or plane by lots of collectors and dealers.

2. The host hotel was very nice and very affordable.

3. This show included, for the first time, John Reich Collectors’ Society (JRCS) members. JRCS is for collectors of US silver and gold coinage from 1794-1840. And they showed up in impressive numbers.

4. The “behind the scenes” tour of the new Eric P. Newman Money Museum.

To give you an idea of the demand for that museum tour, I called the volunteer EAC host to get my name on the list to attend. I figured calling him a month in advance would be plenty of time to secure a seat. After all, this was a field trip to a coin museum, not a Rolling Stones concert.

Boy, was I wrong. All two hundred slots for this tour were spoken for, and I was #20 on the waiting list. Needless to say, I was not able to get a seat on the one of the 4 busses that transported folks to the museum. I heard (unconfirmed) rumors that there was a dealer making a buy/sell market in these “free” tickets. After all, Mr. Newman, who once owned all five 1913 Liberty nickels simultaneously (one of which sold just this month for $5 million), has a collection that is said to surpass even John Ford’s holdings [now being sold in a series of 20+ auctions spread over 5 years]. It was the hottest ticket in town.

Buying and Selling Activity at EAC

Based on our mediocre business results from the past few years from EAC conventions, our expectations for this event were very modest. Surprisingly, it turned out to be quite a decent show. Our sales were split about evenly between dealer-to-dealer and collector sales, and our sales total outstripped our purchases here.

I asked several dealer friends who set up here how they did. All agreed that their sales surpassed their modest hopes as well.

The auction, a members-only affair expertly cataloged by McCawley & Grellman and limited to just colonials, half cents and large cents, had the usual array of rare die varieties and other specialty items from $50 up to not much over $10,000 per coin for the most part. Participation was sure to be active and few bargains were likely.

Surprisingly, the most pre-auction excitement among the bidders was for the run of magnificent electrotypes pedigreed to the late Jules Reiver. These copies, avidly collected by specialists, were expertly made from the finest genuine early large cent “host coins”. Records will likely be broken in this area (this report is being written prior to the Saturday night sale, so I can’t quote numbers).

Now on to the important part of this blog – the food. OK, most of you out in coin-land couldn’t care less about the food at these things. But, this is our report and we can do what we want in this space.

The complimentary dinner for 100-200 attendees on Thursday night (provided by the wonderful, good looking, generous folks at Goldberg Coin Auctions of Beverly Hills) was nothing short of amazing.

Veteran dealer Sondra Beymer told me afterwards that this was the best group dinner she has ever had since she’s entered the coin business, and I wholeheartedly agree. It surpassed past dinners hosted by the greats of free coin-food dealer lore – the PNG dinners, the PCGS dinners, and even last year’s amazing spread at the EAC convention hosted by Heritage Numismatic Auctions of Dallas.

One can only hope that this is the start of some sort of rivalry between the various organizations to see who can provide the most spectacular dinners.

The State of the Market

While business is not as wild and active as it was during the first half of 2006, there seems to be a healthy equilibrium between buyers and sellers at current price levels – and plenty of demand for the good stuff.

At the current pace, and thanks to our loyal customers, we are on track to have another really strong year in 2007.