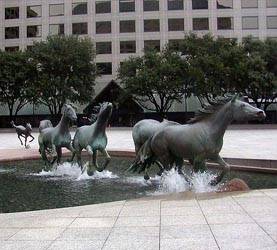 Rest easy and be calm CRO website visitor, we are back from our extended, non-work-related tour of Italy (during which your author ate 63 arancini and at least 111 caprese salads) and ready to dive back onto the U.S. coin circuit.

And what better place to do it than at the EAC Convention?

Why none, of course, which is why we are so looking forward to this event.  But not just for the business opportunities we expect to find here, more so the fine blogging fodder this show annually generates – raw material we plan to mold, sculpt, shape and shoehorn into some mighty-fine Road Reports which will be posted right here each and every morning of this show.

So you might want to keep an eye out for those.

Thursday would officially begin for your author at 2:16 AM, when I finally gave up on trying to sleep in what was without any doubt the loudest hotel room I have ever stayed in.  So much so that I had to switch rooms, the first time I have ever done that in 30 years of world traveling, including that memorable time I found a rat (the four-legged kind) in my room at Brown’s Hotel in London and then stayed there for another FIVE days.  Hey, I really do not like to complain.

But once I’m up, I’m up, so I figured I’d sort out new inventory, finalize prices and arrange photos for the next Early Bird before eventually making my way down to breakfast at 6.

Where, as is always the case at an EAC show, nearly every other person you see at the hotel is a coin friend of the collector or dealer variety and finding someone to sit, chat, drink or eat with is a snap.

After which I hung around the lobby doing the same for hours, meeting up with guys I see on the “regular” coin circuit, but others I reconnect with only once a year at this show.

Which eventually migrated into lunch with more of them before we were allowed into the bourse room for dealer set-up at 1.

And while an EAC show rarely runs with the clinical efficiency of, say, a Whitman Show, and you are often lucky to find a lamp, a clamp or a bulb (but never all three), this time things went as smoothly as I can ever recall, a credit to Mark Borkhardt of Heritage who organized the whole thing.  Kudos Mark.

So I quickly spread out the abbreviated, 2-case-sized, copper-centric CRO inventory for this show, elegantly taped the CRO banner to the wall behind me and decared myself open for business.

After which not a great deal happened, as no public would come in on this dealer only day, all of us dealers slowly schmoozed our way around the room, seeing what everyone else brought and looking for cool things to buy.

Of which I found a bunch of coins in all different categories which had one thing in common:  All were raw.

And then saw something interesting I’d never noticed before – namely the backward D in NEW ENGLAND on the reverse of this infrequently seen Noe-35 Pine Tree 3pence: 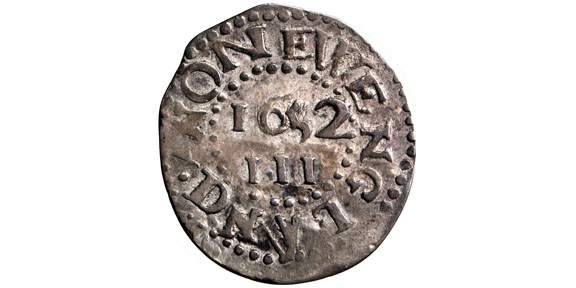 But then at 5 PM we all packed up, locked up and headed to the EAC kick-off reception next door with a more impressive spread than usual this year, a super enthusiastic crowd and the very real risk of being steamrolled on your way to the burrito bar.

Fortunately, that did not happen, and your author was in fine form for the evening’s activities, which would include individual “Happenings” (EAC’s name for the informal sessions focused on Colonials, Half Cents, Large Cents respectively in different hotel meeting rooms).

And while I would normally consider these a highlight of the show, it’s pretty hard for me to report on them this year since I went upstairs to drop my bag in the room and woke up about 15 minutes ago (i.e. on Friday morning), which I directly attribute to the aforementioned loud room the previous night, or possibly some remaining jet-lag from my trip last week, but probably both.

Anyway, I am now sufficiently well-rested to confidently tackle a Day 2 which figures to be downright busy with full collector participation, and many, many blog-worthy events.

All of which will be reported here tomorrow AM in excruciatingly entertaining detail.

A funny thing happened on my well-rested way out the door on Friday morning in the form of an early morning I-forgot-you-were-in-the-central-time-zone phone call of the “I’ve got something your going to want” variety (something that happens to us about once a week on average, is always welcome, but doesn’t always turn out to be an offer of a coin we actually end up buying).

But this time things were waaaaay more interesting than usual, and so I put my very strong desire to go eat breakfast on hold for a while, settled into my not very comfortable hotel room chair and ended up hammering out a deal for the highest graded Higley Copper we’ve ever handled.  Which I think we’d all agree is a good way to begin any numismatic day.

So when I did eventually go down to the lobby, I was downright giddy as I ate my English muffin with two dealer friends.

And then strolled into the show promptly at 8, switched on the lights, and started the process once again of trying to buy, sell and/or trade for cool coins.

Which would begin extremely well, with the purchase of two superb, gem, old-holdered federal coins from a local collector I had never met before, which is of course exactly the kind of thing we hope will happen as this show moves from city to city (or little tiny town, as it were) each year, allowing for participation from people we may never meet at the national shows.

Then made some quick sales of the decidedly non-copper variety, which is probably not too surprising, since Half Cents and Large Cents are well represented at other tables at this show, but a lot of the things we brought are only available at the CRO table.

We also seriously considered (agonized over, actually) some other coins on the floor here, ultimately holding off for now on coins which we might well end up buying before we leave. And we’re not the only ones, as throughout the course of the afternoon we showed lots of coins to collectors who studied them intently but weren’t ready to commit just yet, something that is not unusual in our experience at an EAC show, as serious collectors carefully consider everything available in the room before pulling the trigger on bigger coins. Hopefully some of those will be ours.

But while they were pondering, we headed out to dinner at what turned out to be a very difficult to find restaurant with a gaggle of collector and dealer friends and had an excellent meal, Texas style, before getting back to the hotel real late.

Saturday will be an abbreviated day, as we hang out here ’til early afternoon and try to make as much hay as possible before we go.

And if we do, or even if we don’t, we’ll report about it right here in our last RR from this show.

Up early again on Saturday here in Dallas, I packed up, checked out of the hotel, made my way down to breakfast with a rotating band of coin dealers who came and went from our table, and then migrated over to the bourse floor crisply at 8.

Where right off the bat I snagged a nice VF Pine Tree Shilling, and a very cool medal, then found a couple of federal coins I seriously considered buying.

Wasn’t totally sure about those last ones though, and since these were outside my normal area of expertise, I discussed them with another like-minded dealer who knows that series better than I do, considered splitting them with him, but then ultimately bowed out and let him buy them. The kind of thing that happens with some frequency in our business (or at least in the CRO business) where we will partner with others when it makes sense, but not when it doesn’t, and are quite happy to let someone else buy what might turn out to be a good deal.

But the more interesting news on this day was the retail traffic, with some new visitors who came to the table during the morning and bought some good coins, continuing our trend of strong world sales here and making Saturday the biggest selling day of the show.

Not sure I saw that coming, particularly since my 3:30 PM flight home had me packing up and departing at about 1:30, the only way to get home in time to see my daughter’s high school play.  Hey, sometime’s you gotta do what you gotta do.

And I’m pleased to say it all worked out very well, capping off a nice event for us in in Texas with some excellent purchases, surprisingly good sales and interesting new contacts which were well more than enough to entice us back for next year’s show in Charlotte.

But before we can even think about that, we need to get cracking on Tuesday’s Early Bird which will be an XL offering including coins acquired over the last month or so and including many epic pieces which have been off the market for d-e-c-a-d-e-s.