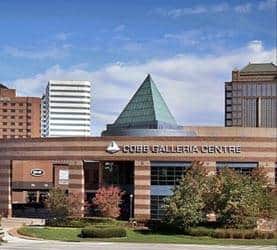 First the really important part: Thursday evening I had dinner at Canoe, a restaurant about 10 miles from the show, which had been recommended by coin dealer-gourmet Andy Lustig on the PCGS forum. I would say that it was one of the top 2 or 3 meals I’ve ever had in my life – and thats saying quite a bit considering that my wife is a really, really good cook and I spent 15 years traveling around the world on business (i.e. eating). If you ever get a chance to go, you HAVE to. I’m serious.

OK, there was also a coin show which I will now describe.

Truth be told, we were not too ramped up about attending this show and did not have particularly high expectations. We figured on smallish crowds, and thought the Heritage auction offered little in the way of new, fresh and exciting material.

And at the outset, it looked like we were going to be right, as the show started quietly for us on both the buying and selling side. But toward the end of dealer set-up things started to pick up and by noon Friday we were numismatically rocking.

We sold some important and really choice coins (including the magnificent 1807 $5 ex-Bass) to collectors in attendance, and then went on a mini-buying spree starting Friday afternoon.

A number of new colonials appeared at the show and we leapt at the first shot, figuratively shoved other dealers out of the way and bought about 2 dozen coins which, as colonials go, is a pretty big number.

By the end of day Saturday our sales were really strong, we had some nice fresh material including a few select things from the auction that we thought were really cool, not expensive and that our customers would enjoy.

All of these new items are in the process of being imaged and will be going up on the site over the next couple of days.

Our next show will be at Central States at the end of the month and we head for that with now quite high expectations.

And, importantly, we already have a call in to Andy for a Columbus area restaurant recommendation.