I have good news everyone.  I have determined that it is a LOT easier to pack for a trip when you never actually unpack from the previous one.

Nope.  Just some quick laundry, a reformulation of the inventory to include our latest NEWPs and we’re off again to a new location for what we expect will be an e-x-c-e-l-l-e-n-t show, replete with lots of collectors, dealers and collector-dealers we see infrequently, at an event where we always seem find a lot of really cool coins.

Including at our table, where we will also be introducing a totally new show presentation format that we have been testing for a few weeks, which we now pronounce ready for prime time and where we will be featuring new, never before seen items like this: 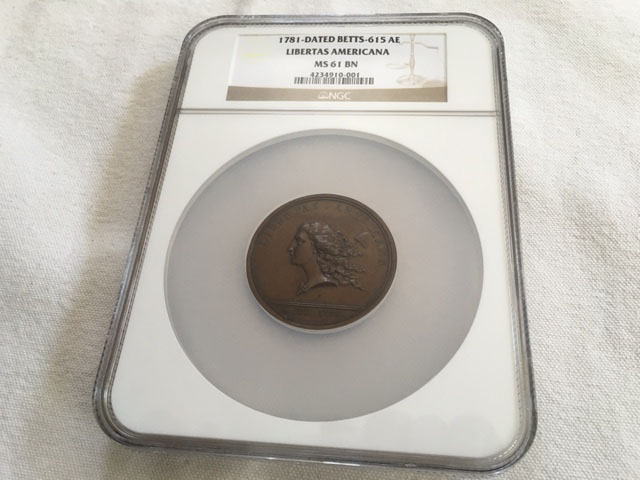 With everything going on in Charlotte to be described, detailed, denoted, delineated and discussed right here in this space each and every single day of the show.

You may not believe this, but I slept a solid 8.5 hours on Wednesday night, awaking rested and ready for action at a civilized 7 AM on Thursday, hit the gym, had breakfast, met up with a bunch of Early American Copperheads, viewed a bunch of new coins, bought 6 and then made my way to dealer set up at 3 PM.

Where I was delighted to find my cases ready to be loaded, the correct number of lamps (with bulbs in them) and a bunch of chairs, which is not always the case at these events but which was much appreciated on this day.

Allowing me to instantly put out an inventory selection different from what we had in Baltimore in 4 key ways: 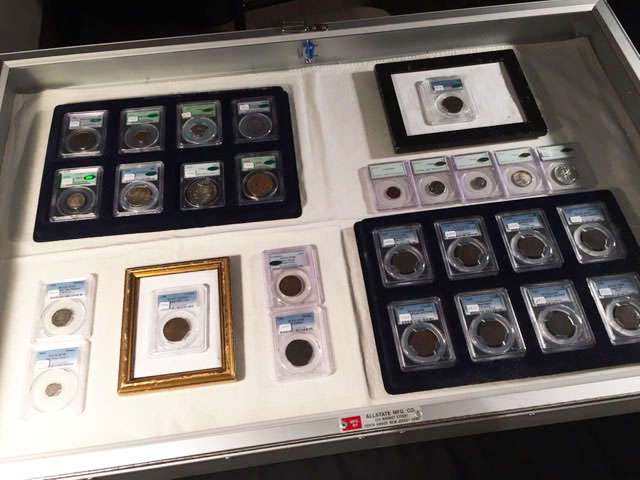 And I guess that worked, since we made our first sale right after, and it was an XL one.

Followed by a looong, slow circuit of the room during which we peered in every case (noting that some guys weren’t set up yet, and others were in the midst of putting coins out), found some cool stuff and bought most of it, while pondering but ultimately passing on a few others.

And then all of a sudden it was 5 PM and time for the start of the EAC reception, which was right out in the anteroom, featured an excellent appetizer spread and a cash bar, all of which we chose to partake in sparingly so as not to wreck dinner.

A very good decision as it turned out, since we then headed out for soul food down the street at Freshwaters which was about as good at any place we’ve ever been on the show circuit. Seriously – if you are in Charlotte you have to go there.

After which it was time to call it a night so I could be ready for an early start and a full day on the bourse floor Friday during which we fully intend to buy and sell a plethora of Early American Coppers (and all sorts of other things too).

With our various successes and failures (if any) to be described here in vivid detail on Saturday AM.

It turned out to be a more active day on the bourse Friday than we have seen at recent EAC shows, as we bought and sold colonial, federal and world coins starting early in the morning and continuing on until they closed the place and threw us all out promptly at 5.

Ironically, none of our numismatic comings and goings on this day included even one, single, solitary Early American Copper. True.

And while that may sound like a strange thing to say at a show specifically geared for such items, it’s not at all unusual in our experience. Indeed, we have always found that colonial, early silver and especially world coins have always been extreeeemely popular with the mostly advanced collectors present at these events.

Though not everyone quite fit in that category, as we also had some newbies at the table, including hotel staff wanting to know what the heck was going on in this room, and a few other local guys surveying the scene with an old Redbook in hand and asking questions about various items. Which I always enjoy, even when they want to know if the 1937 proof set in our case marked $4,750 is “$47.50”. No. No it isn’t.

Some interesting and unusual items also walked up to the table, including two neat looking 16th century Transylvanian Talers that I figured I could buy, consign straight to some world auction and maybe make pretty good money, but that would have violated at least four tenets of the CRO business:

So of course I bought them anyway. Just kidding. I didn’t, instead directing the owner to a world dealer present here who bought them and will now probably make a killing, retire, and use the proceeds to purchase a villa on a lake somewhere. Possibly.

With your author’s own buying activities restricted to the sort of cool stuff we typically handle and know inside and out, including some raw Pillars and Portraits at the end of the day that will eventually be appearing on this very website.

And then it was time for dinner with a large crowd of collectors and a few dealers at Chima, one of those Brazilian Steakhouses where the guys show up at your table every 13 seconds with an entire cow and keep serving you until you proclaim “No Mas!”.

Which we all eventually did at about 9.  And while most of the guys then headed straight to the hotel bar, your author called it a night so as to ensure I would be rested and ready for what I hope is another good day on the bourse floor on Saturday.

Which will be described in our next RR to be written from the comfort of home on Sunday AM.

Three good days in Charlotte reminded us once again that the EAC show is a bit different than most we attend:

Most all of the attendees know each other.

And most all of the dealers set up here know each other too.

With all of us in a small room where people can pretty much see what everyone else is doing.

Which becomes most obvious when a prospective buyer of a coin asks if he can show it to someone for an opinion – something that is not unheard of on the circuit. Though it doesn’t usually play out in such an overt manner as here where you can’t help but see a dealer on the other side of the room holding your coin in his hand nodding approvingly.

And while that could be a bit disconcerting to some, it is better than if that same dealer had been giving a massive thumbs down with cartoon hand gestures and/or loud raspberries.

Fortunately that did not happen here, one again highlighting what to me is an especially interesting dynamic in this industry: Many of my closest friends on the circuit are also my direct competitors.

And while we all have different business models, specialties and approaches to what we do, there is certainly some overlap where any of us may at times be marketing similar items to the same pool of collectors in a zero sum game in which a sale made by my competitor, for example, is a sale I did not make.

With the same thing happening on the buying side, where a coin which walks into a show and is sold to me is a coin my competitor didn’t buy.

And while that sounds like a recipe for some TV movie-style cut throat, back stabbing behavior, that’s typically not the way it works in our business.

Because the same dealer who is my competitor on one deal may be my customer the next day and my partner in a new deal the day after that.

So there tends to be more friendly competition here than was found in, oh, I don’t know, Barbarians at the Gate.

With all these good vibes on display at the show on Saturday, with coins sold to collectors being blessed by other dealers on the floor, with your author purchasing items from several dealers who had acquired things before and during the show and then thought of me as a likely buyer, and your author splitting a new deal with a like minded dealer who knows a particular series better than I do.

And while it would have been nice if we had done even more business here, we can’t complain about a show in which we sold our fair share of coins, schmoozed extensively with good numismatic friends, learned a thing or two and left with a lot of cool new stuff with which to dazzle table visitors at our upcoming shows in Chicago, and then Chicago again.

Not to mention the new raw ones that aren’t yet ready for prime time, or the potential future deals we heard about and will be trying hard to secure starting just about 15 minutes ago.

But now, after getting home very late last night, we are going to enjoy a concentrated 12 hours of R&R before leaping headlong back into coins first thing on Monday morning.