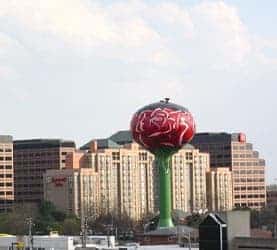 Aah yes, the CICIF show, CRO’s once annual opportunity to formally and completely devote ourselves to the ‘Dark Side’ (as in world coins, you know, the ones made in or circulated in places other than the good ol’ US of A).

Sure, there are plenty of people here we see regularly at the major coin shows (collectors, dealers and even the auctioneer, Heritage), but with them are many people we see only at this show, having traveled in from all corners of the globe, offering an interesting mix of coins of all types, many of which we won’t recognize and/or will have never, ever seen before.

So why are we here?  Becuase of course there are also plenty of the WCWCIEA (World Coins which circulated in Early America), and many of the other issues we regularly offer on the site.  Not to mention a lot of our Chicago area clients also pop in, making for what figures to be an entertaining few days and a robust CRO commercial opportunity.

The robustness of which will be described here each morning before the show starts, including (we promise this time) photos of interesting things we see, or buy, or bid on while we’re here.

Meteorogically, Thursday was a loud day in Chicagoland, with violent thunder storms and high winds first interrupting your author’s REM sleep / important prep time for the show, and then continuing on into the day delaying some dealer flights and undoubtedly preventing some local collectors from making the trip into Rosemont.

The result:  A pretty quiet bourse with a number of not-yet-occupied tables.

Some of us were there bright and early (and exhausted) though, first doing some brush up lot viewing in the early AM and then exploding onto the bourse floor (which is actually in the very same room) just as they let us set up at precisely 10.

Which I did with great efficiency (hey, it’s not that difficult when you have only two cases, 1 light, no banner and only the world subset of CRO inventory).  And then began the first of what would be 25 or so circuits of the room peering in dealer cases, hunting through raw coins in boxes and generally looking high, low and in-between for interesting coins to buy.

Total tally:  Must have been about 20 coins, fully half of them raw, some from usual suspects, others from world dealers I’d never met before (including one guy with an umlaut in his name testifying to his legit international credentials).

Sales, on the other hand, were pretty meager with the aforementioned light (so far) attendance.

So we turned our attention to the evening’s Heritage auction, buying a couple of cool coins, seeing others of ours sell for slightly or wildly more than we expected before heading out for dinner with a local friend I last saw in 1989 (an activity which I highly recommend to anyone that has a burning desire to feel really, really old).

But not as old as some of the coins we expect to buy and/or sell on what figures to be a more crowded, more active and better rested Friday at the show.

The good news: Pretty much all of the dealers did arrive by Friday morning, with their cases quickly filled to the brim with shiny new (and crusty old) coins of all types.
The bad news: Your author was extreeeemely disappointed with the overall quality of the offerings, finding precious little good stuff to buy in any of them despite my exhaustive efforts and willing checkbook.

Which is not a common sentiment in these Road Reports (seriously – go back and quickly read all of the previous ones dating to 2005 and I bet you can’t find more than a couple of these “Hey, there was nothing to buy” mini-rants).

Not that there weren’t a lot of coins – there were – just that most were either bright white uncs or average circs, and not the deluxe toned pieces and exceptionally eye-appealing über-gems we are always looking to buy.

Conclusion: Coins like this are hard to find, and don’t last long when they do show up. So we should be thankful for the cool coins we’ve scooped up lately from obscure sources and old collections, many of which are wending their way through the CRO photography system and actually arrived here to our table in boxes just in time for this show.

So if you do come here on Saturday, we strongly suggest you stop by and see what we’ve got – I think you are going to like it.

So after packing up everything at the table, putting on my coat and heading for the door, I stop ever so briefly to peer into one more case on my way out, spy something cool, buy it for cash and add it to what tuned out to be an unexpectedly good haul of NEWPs on Saturday of cool copper, silver and gold coins from all corners of the globe.

Some of which were relatively easy to find, like this: 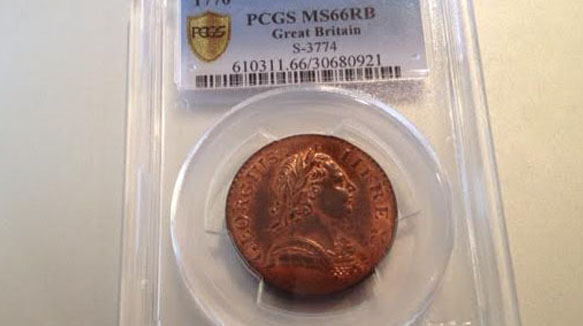 While others were tucked in the back corner of cases, occasionally upside down, sometimes raw, possibly obscured by other coins, but revealing juuuust enough of their colorful old toning to immediately register on the CRO “I gotta have that” scale: 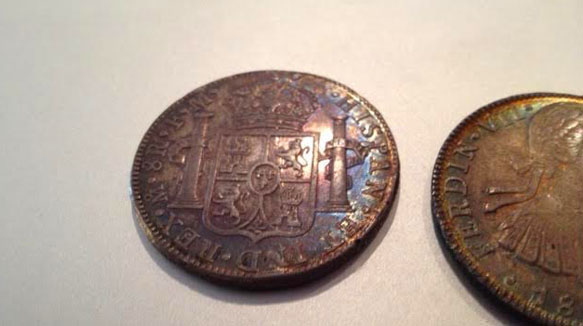 Saturday also turned out to be the biggest sales day of the show for us, though I can safely state that no records were broken, and no one required a fork lift (or even a medium-sized hand truck) to transport their CRO purchases home.

We made some good new contacts though, found out about a few coins that we’ll try to buy in the coming weeks, and possibly laid the groundwork for other deals to follow.

Which when added to what we accomplished here in the first few days on the bourse and in the auction, I’m certainly glad we came, and we will be an enthusiastic returner next year (though I humbly suggest that holding a coin show the week before taxes are due is perhaps not ideal and so someone might want to look at those dates next time).

But now, I’m heading home for a few days before we’re on the road again continuing what is the busiest travel month of the year at CRO.