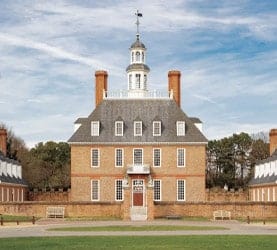 I am pleased to present this recap from my vacation side-trip to view the extensive colonial and early American coin holdings (including pieces on public display, as well as the cool stuff hidden away in the top-secret vaults) at quaint Colonial Williamsburg.

The collection was (and is still being) assembled by Joseph R. and Ruth P. Lasser of New York and generously bequeathed to Williamsburg for all to see, enjoy and study. Which is exactly what I intended to do.

So, while my family was busy touring the Governor’s House and watching historical films (highly recommended, by the way), I was off to the Collections and Conservation Building to meet with friend and Colonial Williamsburg Curator (of Coins and Mechanical Arts) Erik Goldstein – the same guy who, along with John Kraljevich, teaches the ANA Summer Seminar on colonial and early American coins (among other courses).

We began with an in-depth tour of the building, including the vast collections of priceless art and artifacts, all hermetically sealed in state-of-the-art cases, racks and shelves. In one room, workers were busily conserving antique furniture, each and every single piece of which was exactly like what one might expect to see on an exceptionally good episode of ‘Antiques Roadshow’, while in another we saw gigantic period maps and grand paintings. In others there were an incredible number of candle holders. And little globes. Swords. Guns. Period tools. And ghastly medical instruments of the time which looked exactly like the implements my gardener uses to prune stubborn shrubs. The historical significance of it all was almost overwhelming, with cool stuff everywhere, including the chair Erik showed me in which Patrick Henry died.

I am pleased to report, however, that what I first thought were grotesque shrunken heads in one room were actually 18th century leather wig stands. Phew.

But eventually it was time to head for the portion of the coin collection which is not currently on public display, housed in the deepest recesses of the building in a very large safe.

We extracted a number of boxes and headed into a smaller room for up-close inspection, beginning with the New York colonials and speculative patterns, highlights of which included some of the finest early American coins in existence:

And finally (as if that wasn’t enough), the Norweb Collection example of the Inimica Tyrannis Americana Confederatio copper, among the finest of 8 known.

We continued through other groups of coins, including a lovely 3-piece set of Myddeltons including the Silver and Copper Tokens, and a superb Copper Company of Upper Canada muling.

Then to Voce Populis, including many pieces from the original Nelson collection. Ironically, the rarest of the coins in this group were also the highest graded, including a near gem Small Letters Farthing and a spectacular Nelson-1 Halfpenny the likes of which I did not know existed.

Did I mention the nice Pitt Farthing and rare white metal Pitt Halfpenny in the next group?  Now I have.

Then there was a nice Standish Barry Threepence, followed by some exceptional Washingtonia pedigreed to Garrett, Eliasberg and other significant collections.

We concluded by viewing several boxes of foreign coins which circulated in early America, including some exceptional Pillar coinage of all denominations and some of the finest Lion Dollars and Half Lions I’ve ever seen (or heard about).

To say nothing of the historical medals of all shapes and sizes.

But after a few hours, it was time to let Erik get back to work, and so I met up with the family and, after some non-numismatic touring, headed over to the Dewitt Wallace Museum for a gander at the coins housed in the elaborate public display. Which did not disappoint.

On one wall there is a comprehensive collection of Massachusetts silver coins in a tidy display case, including Oak Trees and Pine Trees by die variety, as well as very nice New England and Willow Tree Shillings.

While the opposite wall contained a wide variety of very cool things including the following:

There were also a number of colonial related foreign coins as well as some superb pieces of colonial currency on display.

In all, the collection was spectacular and well worth seeing for any serious colonial numismatist who happens to be in the area (and who has an understanding spouse who will allow them to disappear for a few hours to check it all out).