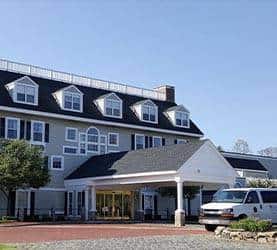 While (most of) the rest of the numismatic world was sleeping in, or possibly out for pancakes, your author and some of his New England coin dealing brethren were up early and off to suburban Westford, Massachusetts for the regular ‘4th Sunday of Every Month’ show.

At its regular location at the old style Westford Regency Inn & Convention Center, a venue very similar to those which your author visited at coin shows as a 6 year-old in upstate New York (possibly with some of those same guys set up here).

And the parking lot was already jam-packed when I arrived, making me think I might have already missed something good. But if I did I’m not sure what it was.

So instead I focused on my own activities, first setting up the ‘local show version of CRO’, which consists of one display case containing just a representative sampling of the things we carry. And while we are always delighted to sell a coin or two (or 27) from this offering, we also try to steer people to the website where they can see 15x as many coins and, we hope, find some things they like.

And that’s pretty much how it went, as I saw some old friends, got to introduce myself to some current customers I had never met before in person, made a few new acquaintances, made a couple of sales, handed out a bunch of business cards and generally made good use of the limited time I had here, since the show technically only runs until 3 (which in coin dealer parlance of course means people start packing up to leave at 1:30).

Which allowed just enough additional time to scoop up a few cool coins, including the first Superbird Quarter I’ve ever liked enough to buy.

And then head back to the office to get started on Tuesday’s Early Bird which will contain a wide variety of coins we acquired at the ANA, from recent auctions, from Europe, from old collections and from generally everywhere else on earth that cool CRO-style coins can be found.