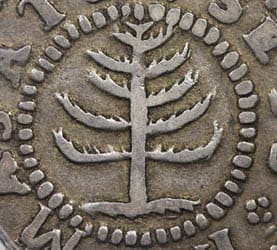 An increasing portion of our business is in colonial coins, and so we thought it was about time for us to speak up.

So, where do we start? How about at the beginning?

Q: What the heck is a colonial coin?

A: ‘Colonial Coin’ is shorthand for the myriad state, pre-federal, private and foreign coinage issues which circulated in or have some connection to early America.

For years, the Redbook colonial section has been the defacto ‘bible’ of which series are collected by many people, and it is the Redbook listings which serve as the basis for which coins are then slabbed as, and thus defined as, ‘colonial’ by the major grading services.

There are many experts and other reference books which have a rather different view of what should be considered colonial, but we’ll save that for a later commentary.

Q: How do people collect colonials?

A: There are many options.

Type collecting has always been popular, and has seen a significant increase in interest over the last five years fueled by the advent of third party grading of colonial coins. Colonials can be challenging, and mysterious, and certification has simplified collecting and exposed it to a broader, more mainstream audience.

Within the definition of type collecting, there are basic type sets encompassing just one coin of each major series, to expansive interpretations that include one of every coin in the Redbook and beyond.

Historically, various colonial issues have also been collected by individual die varieties. The Connecticut and New Jersey series, for example, are comprised of dozens of major types (which are listed in the Redbook), but also by literally hundreds of individually distinctive die varieties (which are not in the Redbook). Such collecting is as popular today as ever, though it tends to be practiced by those collecting raw coins.

To date, the third party grading companies do not attribute slabbed coins by individual die varieties, though with the recent advent of certification of early half dollars by Overton numbers and Morgan Dollars by VAM varieties, we expect it will happen one day.

Q: How the heck do people grade these things?

A: Subjectively, would be our answer.

Colonial coin grading is a rather controversial topic, as it is in the field of early US copper coins, with two widely divergent thought groups – those that favor traditional standards, and those that favor third party grading.

Third party grading is, in many ways more liberal than traditional standards, usually on circulated coins. Pieces which routinely traded in the 1970s and 1980s as VF may well be slabbed as AU today.

There is also a substantial difference in the grading standards applied by the two largest grading services and it is very important to realize that their grades are usually, but not always, different for the same item. Sometimes very different.

As such, it is useful and important for any collector to view as many coins as possible in order to understand how these coins are graded by each third party service and how they are graded raw by the various auction houses.

Further, colonial coins exhibit significant vagaries of color, planchet quality, strike and centering, etc. and these attributes can impact the value of a coin as significantly, or even more so, than the numerical grade.

In short, numerical grades may vary widely depending on who is doing the grading, and in any case the grades tell only a portion of the story about the desirability and ultimately the value of a particular colonial coin.

Q: What is this mysterious ‘Registry’ I keep hearing about?

A: The ‘Registry’ is the brainchild of PCGS, who realized some years ago, presciently, that people enjoy not only collecting, but tracking their collections, sharing them and competing with other collectors to build the finest sets possible.

As an aside, we are always surprised at how controversial the Registry concept is to non-participants, especially considering the fact that the EAC and other traditionalist organizations have always maintained detailed condition census rankings of each variety. PCGS merely formalized that idea, brought it to the internet and promoted it.

As it relates to colonial coins, the PCGS Registry has become a popular framework for people to collect around. A wide variety of sets are configured, from the most basic ‘design’ set (i.e. collecting one example of each major colonial series as listed in the Redbook), to the most advanced and complete type sets possible within each specific series.

As noted earlier, the Registry concept has not expanded to die variety collecting. Yet.

Q: How reliable are the published population reports and Registry Set rankings?

A: They are generally reliable, but limited.

The population reports are based on the defined standards used by the grading companies, and are prone to the well documented issue of inaccuracies borne of repeated resubmissions of the same items. As such, they are best used as an indicator of relative rarity rather than as an absolute measure of population.

As for the Registry Rankings themselves, I suppose a good analogy might be to compare them to baseball’s World Series. When asked year’s ago why Major League Baseball considered its champion to have a won the World Series when no South American or Asian teams were in the competition, a clever manager responded that ‘we beat everyone that showed up’.

A significant majority of better colonial coins are not slabbed, and so the pop reports and Registry rankings list the small subset of coins which have ‘showed up’ – i.e. which have been graded. And while the number of coins certified to date is a small subset of the total, the percentage is increasing every day and, at the current rate, there probably will come a time when more high end colonials are slabbed than aren’t.

To their credit, PCGS lists the ‘estimated’ grades of the Garrett and Norweb collections in their Registry rankings to recognize that there are other great coins and sets out there, but in general one should view the listings and rankings for what they are – a measure only of what has been submitted to date ranked according to PCGS’s standards.

Q: How come there aren’t any colonials on the Grey Sheet? How do I figure out how much the coins are worth?

A: Good questions. There is no published price guide for colonial coins.

Approximate values (very, very approximate) can be found in the Redbook, with more detailed pricing best derived by monitoring auction results and tracking actual sales of actual colonial coins. A caveat is required here, as auction prices are meaningful to the extent that they are used to determine values of ‘comparable’ items.

As noted above, there is tremendous variation in colonial coins, even for those described as being in the same numerical grade, and so cursory checks of grade and pricing can be inaccurate, if not dangerous. Carefully comparing coins that are graded similarly but which realized very different prices is a useful exercise to understand the values and importance of the other attributes of the coin.

With that in mind, we would suggest that the online auction archives available on the American Numismatic Rarities , Heritage and Stack’s websites would be a good place to start.

Q: How can I learn more?

A: By reading some of the excellent references available on the various series.

There are references of all shapes and sizes, both specific and general, technical and airy. For the purposes of a broad and general overview, we would suggest the Redbook, Sylvester Crosby’s ‘Early Coins of America’ published in 1875, the colonial section of the Breen Encyclopedia (noting that not all of the information therein is 100% accurate) and the online colonial efforts of Lou Jordan on the Notre Dame website and Coinfacts assembled by Ron Guth. The Colonial Coin Collectors Club (known as C4) is also an excellent source of information and camaraderie in this field.

Some excellent research exists also in some of the important auction catalogs of the last 30 years or so and we would recommend several as follows:

There are also a slew of detailed reference books and catalogs relevant to the study of specific areas of colonial coin collecting. If you have an interest in a focused specialty, let us know and we will do our best to point you in the right direction.