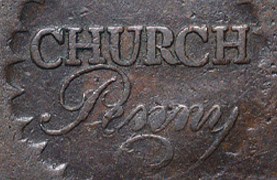 4 Big Boxes:  Quantity of NEWPs sent out for photography from the show.

17:  The number of days we were not on the road and were instead camped out here at CRO World Headquarters (including weekends).

14 Hours:  Typical duration of the CRO workday (though those hours were rarely consecutive).

175:  Average number of non-SPAM emails received on those days.

2 out of 7:  Upgrades we received on coins we resubmitted to PCGS on behalf of a customer.

2:  Early Bird Notifications we sent out.

8:  Duplicate orders we received for the single most popular item on an EB (a new CRO record).

2 Dozen:  Sample CRO shirts we received in a variety of colors, including one that, unfortunately, looked a little like a McDonalds’ uniform.

$80:  The cheapest coin we bought this month (no, it wasn’t the same coin as above).

2:  Number of Albany Church Pennies we handled (representing about 10% of the extant population).

1:  Number of coins we rejected because they were fake.

7:  Number of different auction houses (worldwide) at which we bid on numismatic items.

2 Days:  Stunningly short time it took for a Registered Mail package to get from MA to CT.

5:  Hours I spent working on coin related activities on my anniversary (a Sunday).

None:  Dirty looks, snide comments and general grief my wife gave me for the above.