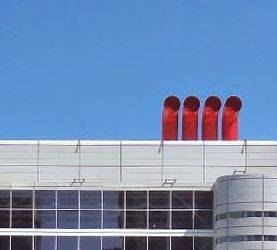 “Hey, I didn’t know you guys did the Houston Show!” is a comment we’ve heard a lot recently, to which we always respond with a resounding Yes! and then direct people to the EVENTS tab on our home page menu bar where you can see every show and (auction!) we’ll be attending over the next many months.

Note though that we can’t post them until the show organizers give us the actual dates, so if you have an interest it’s best to check this section often for updates and new additions.

But for now, we’re focused only on Houston where we’ll once again be at the George R. Brown Convention Center, noting that it looks more like a cruise ship than any other venue we set up at during the year.  Where we will be in Hall E, right near the door, looking to buy and sell with enthusiasm and then write all about it in this space each and every morning of the show.

The show would open to dealers at precisely 9 AM on Thursday, and so of course your author was strategically positioned near the entrance at 8:43 champing at the bit to burst onto the bourse floor and set up our deluxe table #409.

Which would have been done even more quickly had there been any show cases waiting for me there (as is SOP at these shows), but since there were none I cooled my heels for a while waiting for the show organizers to bring me some, eventually giving up and snagging them off the table of another dealer who would not be arriving until later, thus illustrating one of the many reasons I like to get to shows early.

And with that minor delay artfully addressed, I set up four cases of colonial, US, world coins which circulated in Early America and esoteric numismatic items, plugged in 4 lamps and declared CRO officially open and ready for business at about 9:25.

Proceeding over the next 8 and a half hours to buy about 20 coins on the floor, mostly from local and regional dealers I only see at this event, but some others from national guys who had cool things I hadn’t seen before.

Sales were pretty good too, with some made to long time customers who live in this area or were here visiting, but also to new people I’d never met before and who may become regular website customers.

Which in total is exactly what one would hope to happen at a show like this (or any show, actually), and is exactly why it is so important for us to travel around the country to see and be seen.

With our expectations for more of the same on Friday, as all the dealers will finally be set up, there will be more coins to look at and, we hope, good attendance of potential CRO customers.

Sure, there is always something exciting happening at these coin shows, such as early, early Friday AM, when your author woke up disoriented at about 2, staggered around the room in the dark for a while and then smashed his head on this telescoping mirror thing mounted on the wall of the bathroom: 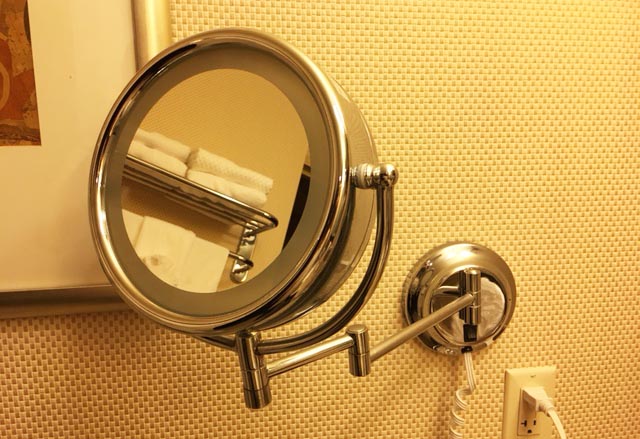 Then resisted the urge to rip it off the wall and fire it out my hotel room window (mostly because it was bolted on real tight, and the windows here don’t actually open).  Instead, I took an extra Advil for good measure and went back to bed for 3 hours.

And then woke up far more successfully at 5, stood in an interminable Starbuck’s line, hammered out yesterdays blog and eventually headed over to the show at about 9.

Where I found a room with nearly every table already manned and teaming with activity of the wholesale variety.

So I jumped right in, poring through boxes of coins at tables I rarely visit and, much to my surprise and delight, finding a lot of interesting coins to buy. The most exciting of which were from a just-consigned group of very pleasing, original, PCGS graded US type coins a dealer was offering at the owner’s original cost + 10%, which by my calculations made some of them not very good deals and others absolute-must-buys-instantly-before-anyone-else-sees-them.

Also picking off a coin or two here and there as we walked around the room.

All adding up to something like 25 coins oozing with originality, dripping with luster, percolating with cool toning and generally looking exactly like the kinds of things we hope to find as we walk around a bourse floor loupe and checkbook in hand.  Like this, for example: 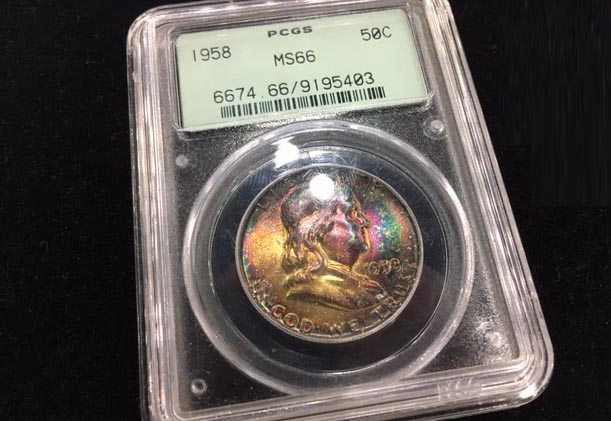 I also finalized the sale of this coin which would certainly have been one of the stars of an upcoming CRO list (or anyone else’s) had it survived until then: 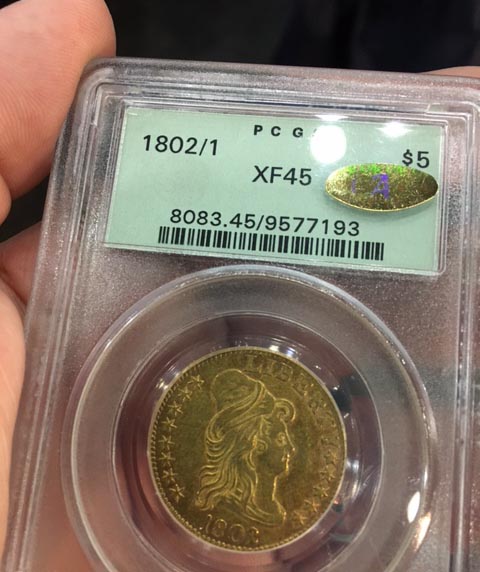 Along with some other pretty good sales here at the show, generally of more expensive coins which in total added up to quite a bit more in value than we have spent here so far despite a haul of at least 50 coins by the end of Friday.

Which as you can imagine can make a person extremely hungry. Fortunately, there are some excellent Tex-Mex dining options here in Houston which some dealer friends and I availed ourselves of for the 3rd consecutive epic evening, before your author went to bed at a civilized hour (after wrapping that dangerous mirror thing in a towel).

Since I’ll need to be ready for what figures to be a reeeaaaally long Saturday during which we’ll need to check out, schlepp our bags all over, work a full day on the bourse, buy and sell more cool coins, drop off our last grading submissions, pack up, catch a late flight and, if everything runs according to Hoyle, get home to New England around midnight.  Phew. I’m exhausted just typing all that.

With our final Houston RR installment to be written early on Sunday AM. But not real early.

Good news everyone, my flight home actually arrived early, so I was back here well before midnight at 11:53 PM.

And I was feeling down right energized at that late hour, mostly due to a surprisingly active Saturday at the show in which we bought and sold waaaay more coins than certainly I expected, since often this day can be a dud at coins shows, and here many dealers had packed up and left by around noon (if they hadn’t already left Friday night, which many did).

But CRO was there for the duration and this time it paid off handsomely, as I sold 6 coins of the federal variety and 1 colonial, several into the high 4-figures during the day.

And bought 2 more pretty big ones I had been pondering, along with some assorted inexpensive coins I found during one last tour of the room in which I decided to extra carefully look into the cases of every local dealer.

With this last adventure proving to be especially interesting (and not always in a good way), revealing some apparently local coin dealing nuance with which I had been heretofore unfamiliar.

Which went something like this: I see a nice looking Capped Bust Half in a case with a sticker that said 550 on it (to be accurate, it actually had a sticker with 575 that had been crossed out, and another with the 550). I take a close look and then ask the dealer his best price and I am extremely surprised to hear him say “580”.

Which I first interpreted as a sleight of the “we don’t take kindly to strangers around here” variety, or some other provincial world view.  But then the exact same scenario played out at 2 of the next 10 or so tables before I finally asked the last guy what these stickers meant.

With the explanation being that those stickers were on the coin when he bought it, and he leaves them on there so that others can see what his cost was.

Personally that seemed kinda wacko to me, and I was sufficiently taken aback that I didn’t buy any of the coins so affected even if the actual verbally stated price still made sense.

I also wondered what would happen to the US economy if this approach was used across all industries, with my best guess being that everyone would be confused all the time, nothing would ever be sold to anyone again and we would all eventually be hunting wild game and/or tending our own small gardens.

But it’s a free country, and any dealer can place (or leave) as many stickers on a coin as they want.  Fortunately, CRO uses the “this is how much we are asking for this coin” price stickers, and that technique seems to work just fine.

And now, we’ll take exactly one day off and then start work on our next Early Bird which will go out on Tuesday at noon, will be filled with an incredible array of cool coins of all types with the price we are asking clearly marked on each one.