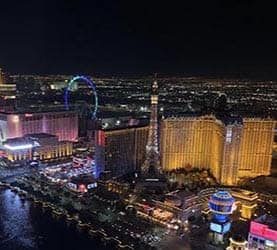 So you think it’s all fun and games on the coin circuit, eh?  Well, actually, that’s largely true, but sometimes the fun takes a backseat to hard work.

Such as here in Las Vegas on Wednesday, when your author was up super early for two (2) east coast conference calls, the first about a large collection we are trying to buy in partnership with another dealer, the second with members of  the team building our new website which I would now describe as approximately 87.5% complete as of this writing.

Q: Why are you redoing your website? I like the old one!
A: Hey, we do too.  But the old one is custom built on proprietary 15 year old software, and the guy who built it is on a sailboat somewhere near the Azores Plateau.  So it’s not like we have a choice.  And rest assured, these new people are smart.

Anyway, after that we were off to the show, arriving sprightly before 9 AM so that we were poised to attack the impending breakfast buffet like a wild animal and/or torpedo (especially the tater tots).

So of course we were well fed by the time the show actually opened, allowing us to buy three cool coins and sell 5 others in relatively rapid wholesale succession, then view the Legend lots in intense detail, before returning to the table and meeting with a smattering of customers and dealer attendees for the next several hours.

Occasionally interrupted by your author submitting another coin (or two, or ten) variously for show or office grading, or consigning coins to Heritage for one of their upcoming sales.

The grand total of which could be described as “we had a real fine day“, capped off with dinner with a dealer friend at Zuma, an excellent Japanese restaurant here at the Cosmopolitan where every other person present was either a cowboy (since the rodeo is in town), or hipster (well, just because).  No other coin dealers though which in and of itself is unusual, since this place was awesome and in my experience (which is considerable at this point as seen by the historic Road Reports at the bottom of this page) dealers seldom miss a dining hotspot.

Of course there are many other excellent restaurant options, so maybe they were all just elsewhere.

And we may will be too, tomorrow, but not before we have what we hope will be another good day on the bourse floor on Thursday, followed by another excellent Legend auction starting at 4:30.  And we’ll be there bidding, for stock and for customers, then heading out for that aforementioned dinner real late.

And then blogging all about all of it, right here, in just about 24 hours from now.

There would some important business on this day, as your author succumbed to the considerable Las Vegas peer pressure and decided to try breakfast at a place in the hotel called Eggslut:

Anyway, I had been told they had the world’s most delicious breakfast sandwiches as evidenced by the willingness of otherwise totally sane people to line up outside their door for 30 minutes just for the opportunity to order one despite the presence of other delicious no-waiting-required options mere steps away .

And one of those totally sane people would be your author on Thursday, eventually reaching that counter, placing said order, waiting another 10 minutes for it to be produced and then carrying it back to the bourse room so that I could eat it within just a few feet of the free and quite nice breakfast buffet provided by our hosts from PCGS.

So, was it worth it?  Um, yeah, I kinda think it was.  So consider this a rare culinary recommendation here in the RR.

Anyway, after that it was back to the business of coins which was mildly busier than yesterday, with a few bigger US coin sales and a couple more interesting purchases.

Which I would later whisk off to FedEx so they could be photographed in time for our EB scheduled for Tuesday.

After which your author was very patiently waiting again, this time for the appearance of some grading results that as of late Thursday were not forthcoming.  Oh well.

By then we were fairly deeply immersed in auction prep which proved to be time productively spent, since we managed to snag a few neat items which are of course now too late for the aforementioned EB but will be rarin’ to go for the next one (unless we sell them before then, which is entirely possible).

Anyway, it was then time for dinner with a dealer friend across town which ran quite late, so by the time we got back to the hotel I was completely spent.

But we’ll surely be rested and ready for action again on Friday, with grading results  available (we hope), any late last deals completed (ditto) and then a relaxing looooong trip home on a redeye so I can be back in the office on Saturday (yay!).

I would like to say that Friday in LV  was a hoot, business was off the charts, we had an epic day buying and selling and we received back nothing but superb grades.

Unfortunately, only the first one was true, as it turned out to be pretty slow on the bourse floor and we did not receive back any of our show grading on this day.

Wasn’t a total bust though as we picked up our auction wins, bought one coin on the floor, sold one coin to another dealer, finalized a decent deal started Wednesday, availed ourselves of the excellent breakfast and lunch buffets, snagged a deluxe PCGS Members Only Show sweatshirt and then headed off to the airport at about 5:30 where we could summarize the week as follows:

Anyway, we are now back, suitably rested and ready to start work on our next Early Bird scheduled for this Tuesday. So you might want to keep and eye out for that –