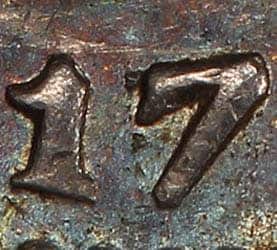 Just hours away from the glorious end of 2017 and mere days away from jetting off to Florida for the FUN show where we’ll start this train all over again, we have just enough time to revisit, rehash and reflect on everything that has happened in the last 12 months and describe it right here in our annual TYIR article.

And, as usual, we were kinda’ busy this year, having attended a new record (for us, anyway) 20 shows, bid in 223 auctions of all kinds, launched exactly 17 Early Bird Notifications with each containing precisely 51 new coins, made our usual plethora of trades, bought (and sold) 13 collections, graded just under 2,000 coins, revamped the website for the umpteenth time, had a robust 1,103 new people click on the gold Early Bird button on our home page and add their name to our mailing list, shipped coins to customers in 43 states and 11 countries and, overall, had another action packed, fun-filled, boy-does-time-fly year in the coin business as summarized thusly:

Coolest Coin Handled
While we bought and sold many CRO-style cool, high grade, neatly toned, rare and unusual items ranging from $40 to just under $300,000, we’re going to go with this fantastic 1652 Pine Tree Shilling, with the august Eliasberg provenance, housed in a PCGS OGH slab and verified by CAC with a gold sticker:

But, as we know, coolest does not necessarily mean ‘most popular’, and that was true in this case where this 1840 Liberty Seated H10¢, No Drapery, received more orders (and emails, and phone calls, and texts) than any other during the year: 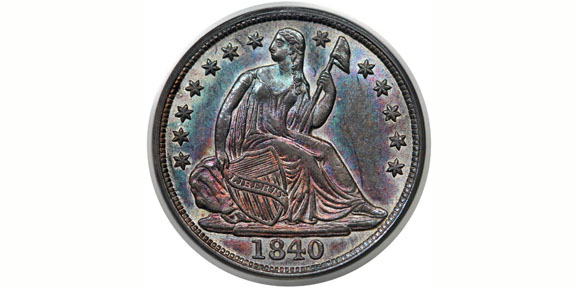 Which isn’t too surprising, since it is a superb, beautifully toned piece with another important and desirable pedigree (in this case Garrett) at a price point that was accessible to many.

But, like every coin on a CRO Early Bird in 2017, it was one of a kind in our inventory and was sold on a first come, first served basis.

Furthest Hat
At 6,720 miles, this tasteful Burgundy and Cream hat upon a serious collector head in cherry-blossomed Tokyo was the furthest documented CRO hat from the office in 2017. 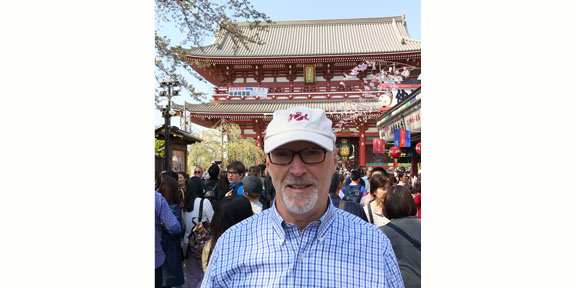 Best Upgrade
No, not at the grading service, this would instead be an upgrade to the CRO coin show display in the form of these custom made red velvet slab trays first unveiled in our cases at the Long Beach show in September: 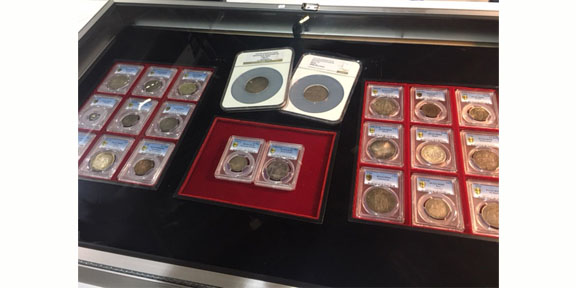 Worst Tropical Vacation
That would have been the unplanned, unexpected and unpacked-for 2 extra days we got stuck in Fort Lauderdale in January. Which sounds like it should have been kinda’ fun, but is less so when you are holed up in your hotel room guarding the inventory that was supposed to have been shipped home and thus can’t leave, do anything, or go anywhere (not even to the pool).

Best Numismatic Krakatoa Impersonation
That would be at the Baltimore Whitman Expo in June when Team CRO drove in from the airport and arrived in the inner harbor just as a steam pipe burst under Eutaw Street spewing steam and debris (and I think some lava) in the air and epically snarling traffic in the area in a fashion considered less than ideal for boosting coin show attendance: 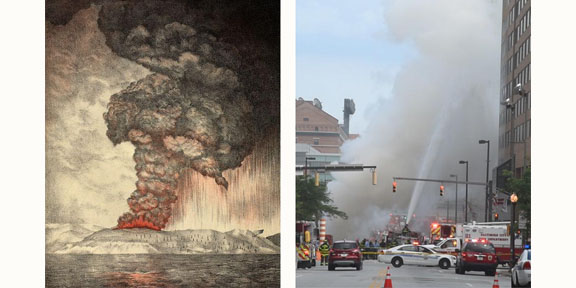 Fortunately, it wasn’t as bad as it looked, they cleaned it up pretty quickly and it didn’t seem to negatively impact the show.  Much.

Largest Drink / Smallest Swimming Pool
Hey, we all know you can develop quite a thirst on the bourse floor, even more so at one of the vast ANA shows like the one in Denver in August. Fortunately, the Fort Restaurant in nearby Morrison, Colorado was up to the challenge with these gargantuan ‘1840 Hailstorm Juleps’ served in heavy duty Mason jars: 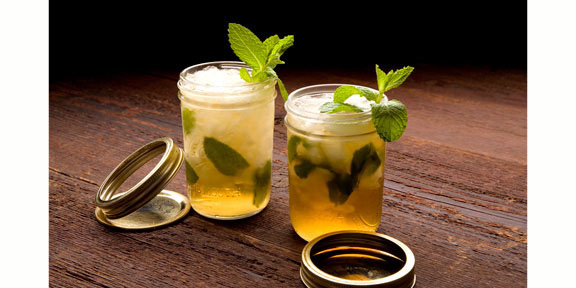 I’m not sure, but I think that’s probably more scotch than anyone really ought to drink in one sitting. But don’t worry – I wasn’t driving.

The “I Shoulda’ Taken That Left Turn at Albuquerque” Award
Not unlike Bugs Bunny, who popped out of his underground tunnel thinking he was in Miami Beach only to discover he was actually in the Sahara and then lamented that he should’ve taken that left turn at Albuquerque, we present the curious tale of a routine coin order shipped in a USPS Priority envelope from our office outside of Boston to upstate NY on September 15th.

Which first seemed slightly amiss when I checked the USPS tracking info two days later and saw this surprising update:

“Hmmm“, I thought to myself, “That can’t be . . . can it? . . . maybe that’s somewhere in New York?“.  Not quite.  A quick check of the USPS map and we see that the Catano PR facility is here, and PR does indeed stand for Puerto Rico: 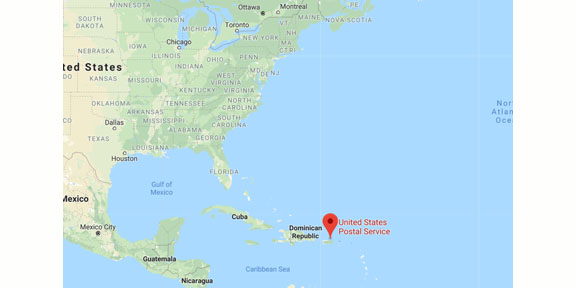 And while that would be less than ideal under normal circumstances, it’s slightly worse when the weather forecast for the island on that day was this: 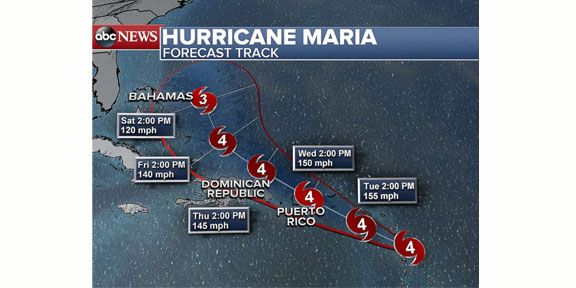 So while I was of course hoping (wishing, praying) the package would zip back out and be on its way to NY before the storm hit, I was dismayed to see that on the 18th it actually made a second stop on the island before disappearing from the USPS tracking system altogether and remaining untraced for a month before it was finally declared lost for good.

Until it suddenly and unexpectedly arrived to the customer in New York on day 45 looking like this (customer address redacted below): 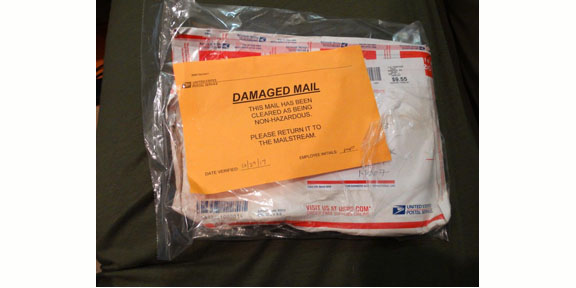 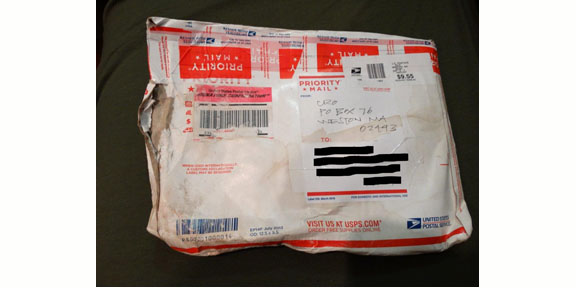 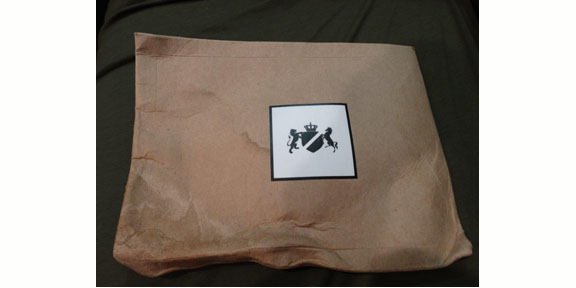 Fortunately, or amazingly, the coin inside was totally unscathed despite having apparently been at least partially submerged (and possibly backed over by a forklift) and is now safely in the hands of its new owner.

And now, just to be sure, we always write NOT PUERTO RICO on each box we ship.

The At Least There Was No Mustard Stain on His Shirt Award
Choosing this year’s winner was not that difficult, as he presented himself at the FUN Show in Fort Lauderdale in January during the un-air conditioned dealer set-up period dressed (er, undressed) like this: 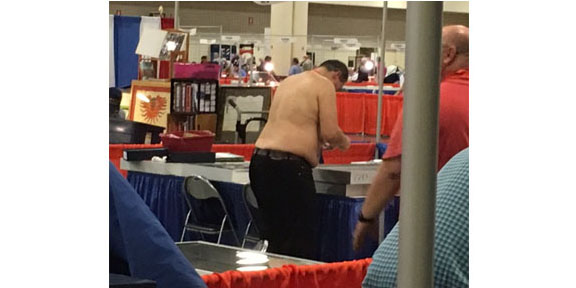 Best Numismatic Reason to Lift with your Legs
That would be this historic, rare, interesting and extreeeeemely heavy piece of Swedish Canon Money offered by us at the New York International Numismatic Convention in Manhattan: 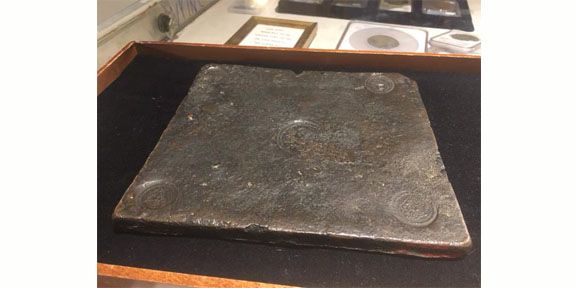 Least Impressive Baggage Handling
Let us tip our cap to the extremely professional and very experienced bell staff at the Waldorf Astoria in NYC where your author arrived in January early in the AM.  At which point I checked in, headed to my room with my luggage (as I usually do at hotels) before being stopped by a helpful chap who insisted I allow him to bring my bag up for me.  Of course that was completely unnecessary (since my bag is on wheels like every other bag these days and easy enough to transport), but the guy wasn’t taking no for answer so I finally gave in.

Fast forward 30 minutes and I’m sitting in my room wondering where he is.

Fast forward 7 hours (during which I called the front desk 65 times and made two trips to the hotel’s basement level luggage storage facility with the manager looking through every bag in the place in a desperate search for my own) when I was notified that it was finally located in the room of another guest where it had evidently been errantly placed by that helpful bellman 5 minutes after he took it from me.

Next time I’ll do it myself, thanks.

Fastest Turn Around
Why that would be our return home from a long tiring Baltimore show in June in which we got back at about 10:30 PM on Saturday night and then were up and out the next morning at 6 AM to set up at the Devens, MA show on Sunday. Something we’d brag more about if not for the fact that many other dealers did exactly the same thing, except that they had much longer drives to get to that show than we did.

Biggest Loser
Actually, this 1686 St. Lambert Token wasn’t that big, but as the only coin we lost in 2017* it was the default winner in this category: 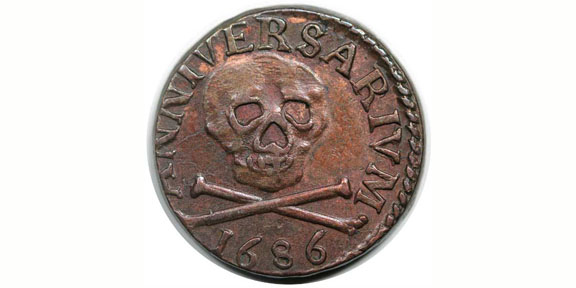 * Actually, unless my memory is faulty, I think this is actually the only coin we have ever lost in any year.  So if you find it, give us a call.

The Coin We Wished We’d Kept
That honor would go to this electric 1877 Trade Dollar elegantly housed in this old NGC Fatty slab with the plain white label and a Gold CAC sticker: 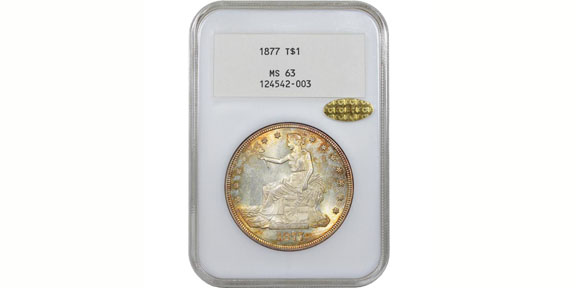 But of course that sale helped make this another fantastic year here at CRO for which we owe our sincere thanks to all of our numismatic friends, coin colleagues and, of course, our loyal customers who make all of this possible.