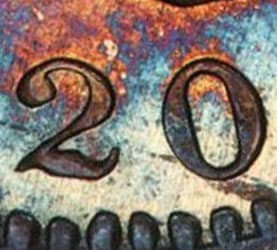 Waaaaay back in January of 2020 we definitely did not anticipate that this is the TYIR article we’d be writing here at the end of December.

At that time we had just acquired some terrific new luggage and were enthusiastically looking forward to seeing baggage handlers fling it into the cargo holds of many, many airplanes this year, where we could test it traveling around the country, attending more shows than ever, seeing new and old friends along the way, scouring bourse floors, finding cool coins in unfamiliar dealers’ cases, doing lots of deals at the table, etc.

Alas, it didn’t quite turn out that way. Instead, it was a tough year for a lot of folks based on the pandemic and resulting economic upheaval, with show cancellations left and right, and changes in the way a lot of collectors and dealers approached coins.  Including us.

Instead of the planned 22 shows this year we ultimately attended only 9 (and that included some small dealer-only local New England affairs added at the last minute), such that our brand new luggage made it into only three (3) cargo holds all year. But while some may have predicted that this light travel schedule would result in 1) Less wear and tear on those handles and little wheels, and 2) A dramatic drop off in CRO activity, those prognosticators would have been right only about #1.

In what suddenly became an almost entirely online and remote business, we participated in 303 auctions from afar, bought lots of cool individual coins privately, handled a bunch of colonial, U.S. and foreign coin collections in deals made by phone and email, did a whole bunch of local appraisals, launched 15 Early Birds containing our usual 51 coins each, and generally (and surprisingly) kept ourselves as busy as ever.

From which we can extract the following numismatic highlights starting right now:

Coolest Coin Handled:
Sorting through a long list of superb items we handled this year, including many epic colonials, a plethora of choice early type, many wild toners, lots of Gold CACed classics, hundreds of neat world coins and more interesting and high grade tokens than just about anyone, choosing the coolest once again proved very difficult. But after careful consideration we are going with this fantastic, undergraded, old-holdered and extreeeeemely desirable 1802/1 Turban Head $5: 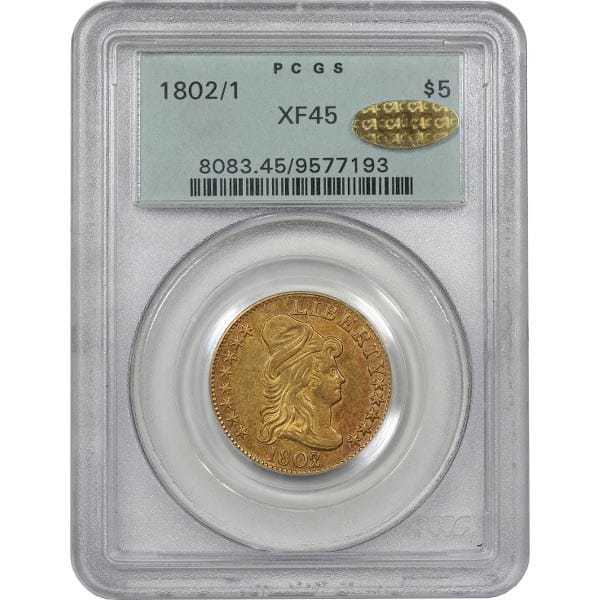 However, coolest (as we always say) does not necessarily equal most popular, for that we have this wildly toned 1820 Capped Bust 10¢ which generated more interest on our website than any other coin in 2020: 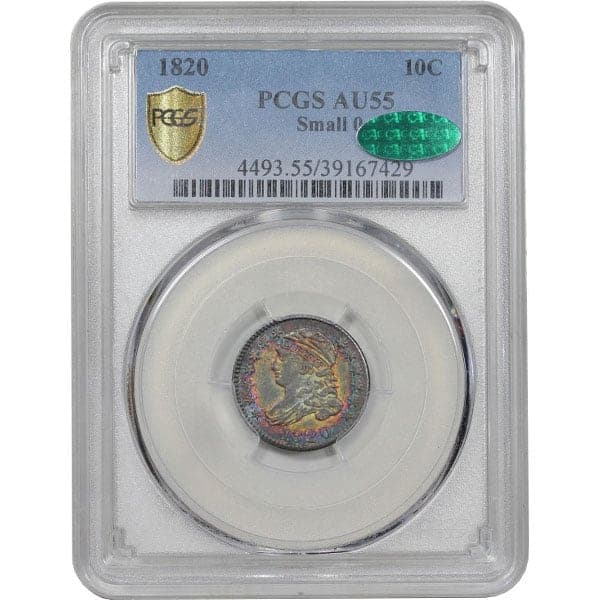 Worst Elevator Music
That would have been at the FUN show in January where Team CRO innocently entered an elevator at the Hyatt in Orlando after dinner expecting a fast, smooth ride to our room on the 23rd floor, but instead ended up trapped between floors 11 and 12 with a bunch of other riders while the maintenance staff – in an apparent effort to drive us all crazy –  began cranking the worst elevator music any of us had ever heard in a continuous, very loud 20 second repeating cycle.
Editor’s note:  For those scoring at home, this was our 2nd stuck-in-an-elevator mishap in the last 7 years.

Most Impressive Sleep Deprivation Experiment
That would be my effort to get from the FUN show > back Home > on to NYC to view world auction lots on the one day I could squeeze it in.  Which would begin with your author working a long day at the show in Orlando on January 10th, flying out after dinner, landing in Boston just before 11 PM, getting in bed by midnight, waking up at 3 AM, boarding a plane to NYC at 5:24 AM, eating breakfast at the Pershing Square Café in Manhattan at 7 AM and walking into HA lot viewing at the Grand Hyatt just as they opened the doors at 9: 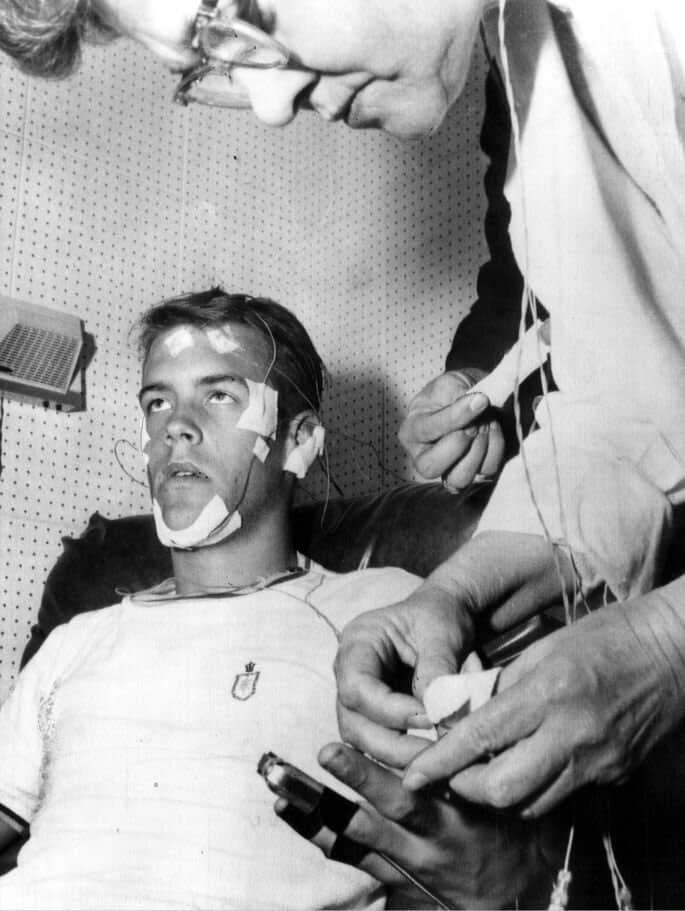 Where I viewed everything, flew straight back home right after and immediately collapsed in a heap.

Least Accurate Uber Driver
Our award this year goes to Francisco, our driver who arrived to take us to the airport and, rather than use our driveway like every other person who has ever come to our house, backed directly onto our front lawn: 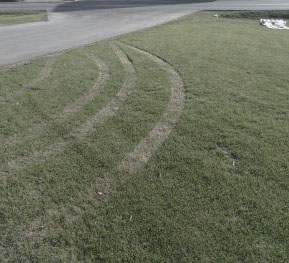 Most concerning:  I’m not convinced he understood any of my explanation of where the driveway is or what purpose it is supposed to serve.

Best Kept Secret Coin
That would be this epic, admittedly esoteric, super choice and well-pedigreed 1788 Vermont Copper, Ryder-30 with the fullest, boldest backward C in AUCTORI we’ve ever seen on any example of this very rare issue: 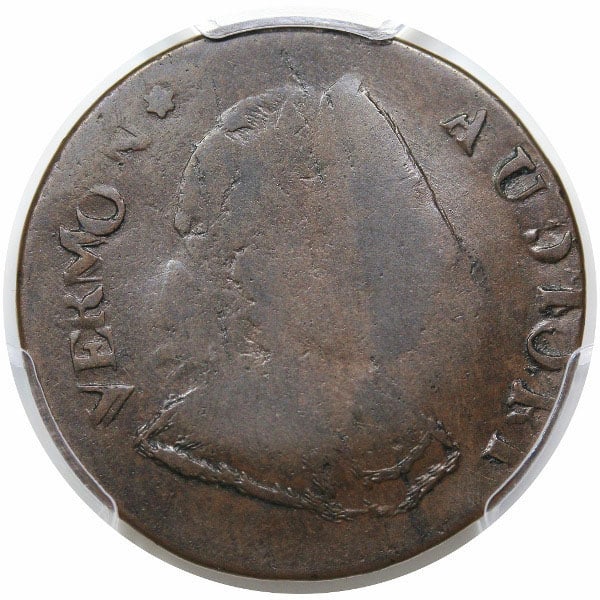 A coin which we bought and sold in 2020 without ever having it grace the website.

The Accidental (Numismatic) Tourist
In one of our favorite coin show experiences ever, a father and son team who just happened to be staying at the Grand Hyatt host hotel on vacation saw the New York International Numismatic Convention sign in the lobby and, on a whim, stopped in to check it out: 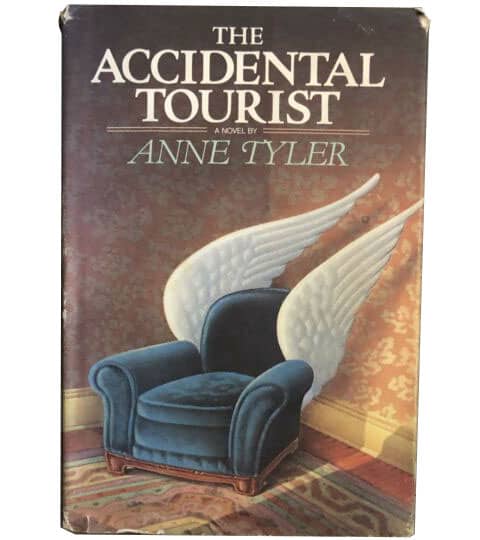 Eventually finding the CRO table, impressing us with their knowledge and buying a choice 1787 Fugio Copper.  I know they did not see that coming, and we certainly did not either.

He Sells Seashells at CRO Award
In a first for us, we did in fact sell one seashell in 2020, this example of depression-era Pismo Beach Clamshell Money acquired at Kagin’s ANA auction of the Ken Hallenbeck Collection of ‘Primitive / Odd & Curious Money’ in Atlanta in February: 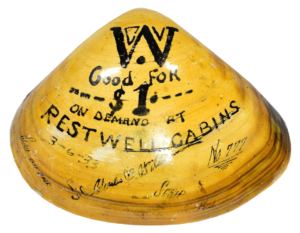 Certainly that qualifies as both Odd AND Curious.  It was also pretty cool – a neat golden color, with a crisp and bold design and a heft and solidity you might not expect in a shell.  I also learned that the underbidder was a Pismo Beach museum which I do feel kinda bad about.

Furthest Hat
No doubt that would be this gunmetal gray and white CRO hat photographed on the head of customer / pilot J.K. standing on the wing of his circa 1930s T-6 Texan Trainer at Wheeler Army Airfield in Wahiawa, Hawaii: 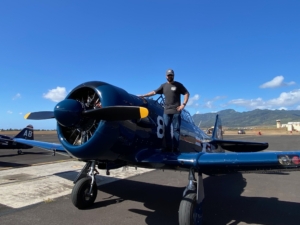 That’s a robust 5,067 miles from our office here in Weston: 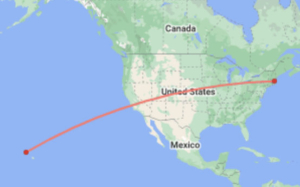 Least Disruptive Massive Disruption
We were frankly dreading the website changeover in April, but after months of planning, weeks of preparation, days of anxiety and several hours of panic we were shocked (in a good way) that it came off almost entirely without a hitch.  And when our business moved increasingly online through the year, we sure were glad we did it when we did it.

Most Unexpected New Business Development Development
Starting in about May, and in retrospect clearly related to our website redesign and related SEO upgrades, we started getting about a 20-fold increase in appraisal requests from customers in the local (and sometimes not-so-local) area that used to go to others dealers.  And, given that we were not traveling like in past years, we were available to do many of them.  Some were small and/or contained pocket change, but others ranged from pretty nice to downright serious to “Are you kidding me?” (in a good way), with many of the coins in that last group winding up on the CRO site in the back half of the year: 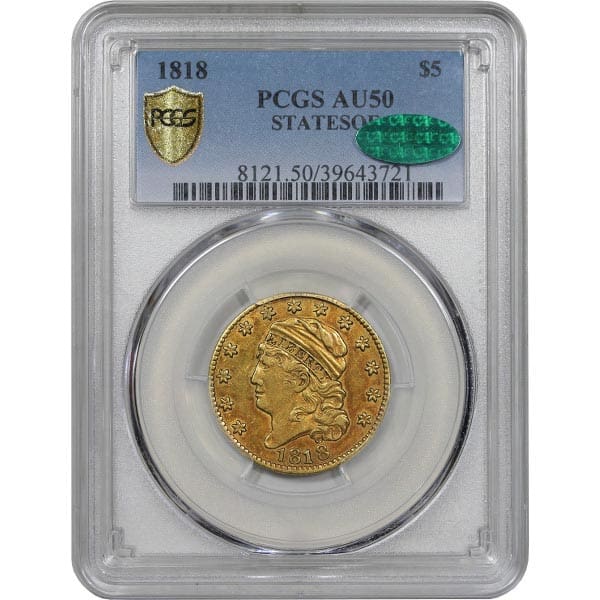 That was the most original, uncorrupted early gold coin we’ve ever encountered in an appraisal and it just happened to be this very tough date.

The ‘Sometimes Snow, Rain, Heat and Gloom of Night Can Be a Problem’ Award
We refer here to the USPS, of course, which has been an integral part of our business (as it would be for a lot of people running websites and then shipping items to customs) and amazingly reliable through the years.  Until it wasn’t in 2020.  With a string of delays and then the double whammy of two lost packages in August.  Yes, we are insured.  No, that doesn’t make it any less painful.  But we got through it, thanks to our insurance co. and to our purple and orange friends from Tennessee: 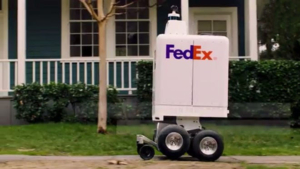 Coin we Wished we’d Kept
Always a tough choice, but for me it is this incredible RB über-gem example of one of our favorite token issues: 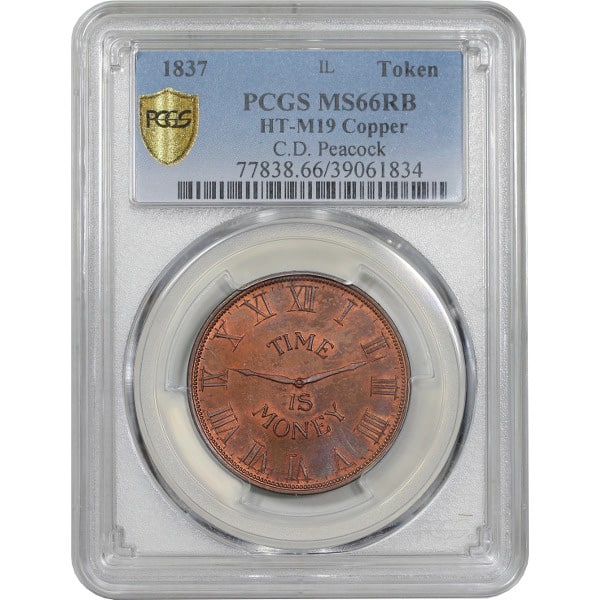 But that sale like all the others helped to keep us going in these unusual times, for which we are very grateful to our numismatic friends / customers / colleagues who allow us to do what we love and hopeful that we provided a positive distraction for all.