As we rocket toward the end of another epic year here at CRO it is time once again for us to encapsulate, summarize and compress 12 frenetic months of numismatic activity into one profusely illustrated TYIR article.

A process which proved to be as challenging this year as ever, since in 2016 we attended 15 shows, bid in 290 auctions, launched 17 Early Bird Notifications containing 50+ new coins each, handled 60 gold CAC coins, made dozens of large and small trades, handled 7 intact collections, graded 2,112 coins, had 441 new people click on the gold Early Bird button on our home page and add their name to our mailing list, shipped coins to customers literally all over the world and, in total, enjoyed another excellent year in numismatics from which we can highlight the following:

Coolest Coin Handled
While we bought and sold our typical vaaaaast assortment of cool, high grade, neatly toned, rare and unusual items, this fantastic album toned, old-holdered, gold-stickered 1799 Draped Bust Dollar stands out as the coolest in our view: 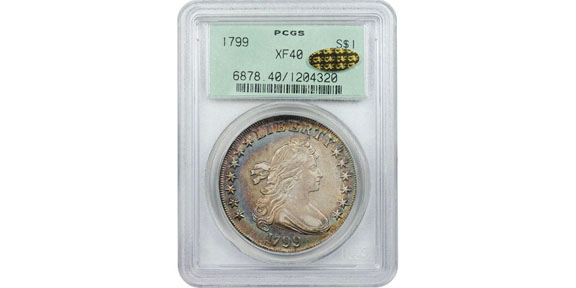 But, as we know, coolest does not necessarily mean ‘most popular’, and that was true in this case. That honor was actually shared (a first for us) among this “Blue Moon” Canadian Cent, gold stickered Barber Dime and epically album toned 1923-D Peace Dollar, each of which received 13 different orders:

Of course, every coin on a CRO Early Bird in 2016 was one of a kind in our inventory and was sold on a first come, first served basis.

Farthest Hat
At 8,519 miles, this hunter green and white number atop a coin collector head in Bangkok, Thailand is the CRO hat farthest from the office documented in 2016:

Most Predatory Business Practice
That would be the mysterious and persistent clicking sound emanating from the A/C system above the bourse floor at the FUN show in Tampa in January which certainly belongs in this category (since it sounded exactly like the hinge-jawed alien star of Predator):

Cherriest Cherry Pick
This is a tough one, but we’re going to go with this run-of-the-mill looking VF New Jersey Copper purchased by an astute collector at the ANA World’s Fair of Money in Anaheim for $400 bucks:

Because he knew this was no ordinary NJ copper – it was actually the 5th known example of a Maris 24-Q variety, and quite possibly the finest of them.

Which explains why we consigned it on his behalf to Stack’s-Bowers November 2016 auction, where it was deemed worthy of the catalog cover here:

Most Symmetrical Travel Experience
That would be my lot viewing trip to the Waldorf Astoria Hotel in January in which I woke up at 3 AM, whisked myself to the airport, zipped down to JFK, Ubered into Manhattan, viewed some 4,000 coins, headed back to the airport for a relaxing evening flight which would then be delayed due to mechanical failure, and then replaced by a second aircraft which would also experience a mechanical failure and then replaced again by a third plane which actually did take off but not until about 2 AM allowing your author to return home and get back in bed at 3:17 AM, a nice, symmetrical 24+ hour, totally exhausting, numismatic day.

Largest Dessert
Wrong, it is not the Sahara. It is actually the chocolate cake served at Gibson’s in Chicago, which arrives at your table stabbed with a Brobdingnagian steak knife and on what must have been a reinforced plate designed to withstand its enormous weight:

The I’m Cleaning My Oven Phenomenon
Referring of course to the 1970s ad campaign for Easy-Off oven cleaner (in which a person could go about their daily activities while this magic stuff cleaned their oven), we enjoyed a similar experience actually selling coins while sleeping (i.e. going to bed and waking up to find email orders in the queue) no less than 59 times in 2016.

Most Annoying TV Set
That would be the one embedded in my bathroom mirror at the Renaissance Hotel in Schaumburg, IL which automatically switched on when you entered the room, but did not automatically turn off when you left, since that required your author to then go back in and turn it off where (and I think you may have seen this one coming) it immediately turned itself back on in a continuing and very frustrating cycle which could have caused a less patient numismatist to destroy it with the ironing board.

Best Use of a Prehistoric Fish as a Proxy for a Coin Dealer Business Model
That would have to be when a dealer friend described his own personal business philosophy as similar to that of the Hagfish (a prehistoric eel-like creature which secretes some kind of slime on which it can choke itself if confined in a too restrictive space), and was thus emblematic of this dealer’s propensity to keep buying even when he risked figuratively choking on that inventory:

Our personal opinion? We think that makes sense, and we also think the Hagfish would be very surprised to know that it was being mentioned in this context.

Saddest Banana
That would have to be this perfectly ripe, bruise-free specimen inexplicably abandoned by a prominent dealer after they vacated their table at the Houston show: 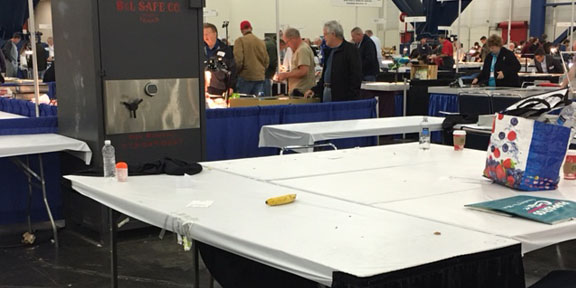 Frustration Sensation
Nothing was more frustrating to your author in 2016 than the times I scoured the bourse floor at a show looking for cool coins, actually found something great, but happened to do so at a table that was either unoccupied, or occupied by a guy who says something like “Oh, those aren’t mine – those are Bob Friedleburg’s coins – he’ll be back at some unspecified future time. Also, he is anti-cell phone, and there is absolutely no way to contact him unless he is standing directly in front of you.”  And then when you do finally find Mr. Friedelburg, he tells you the coin you want is actually on consignment from his customer, who doesn’t know what he wants for it, and he doesn’t own a cell phone either.

The Coin We Wished We’d Kept
We handled a lot of great coins in all categories, but your author was really sorry to see this lovely 1776 Machin’s Mills 1/2p go away, since I have always liked this issue and this is the single finest one I’ve ever had a chance to buy:

On the other hand, that sale contributed to another fantastic year here at CRO for which we owe our sincere thanks to all of our numismatic friends, coin colleagues and, of course, our loyal customers who make all of this possible.