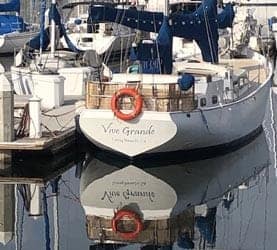 Whilst it seems like just yesterday I was witnessing a medium-sized brawl at our gate at Long Beach Airport as we waited to depart this fine city the last time, that was actually 4.5 months ago and so we are in fact delighted and overdue for a return visit.

Fortunately, I arrived out here on Tuesday evening without incident and now find myself extremely well-rested, suitably adjusted to the time zone and rarin’ to go at what I expect to be a busy and exciting Long Beach Expo.

Made more so by the PCGS “$10 Crossover Special” they are running here, which should bring in a gazillion more people and a gazillion and a half more coins.

All of which should, we hope, give us some excellent buying, top-notch selling and world class schmoozing opportunities, the details of which will fill the pages of upcoming Road Reports to be posted here every single morning of this show.

So you might want to keep an eye out for those.

That would be the total number of steps taken by your author on Wednesday (according to my handy UP fitness tracker) on what was a typically hectic, action packed, mostly satisfying and pretty productive dealer set-up day.

Starting at the Hyatt’s spacious new gym, then breakfast, then meeting a good customer in the lobby and making our way to PCGS for an epic submission of, by my count, about 300 coins, the majority of which were owned by the aforementioned customer and submitted under the PCGS $10 Crossover deal.  A process that was faster and easier than either of us expected, though neither of us has any idea what the results will be.

Then I was on to the Heritage lot viewing room for a rapid fire, ‘fast lane’ tour of the auction during which I identified maybe half a dozen coins to chase.

Which took us right up to noon and the inevitable sea of coin dealer humanity which lodges itself into the cramped space between the bottom of the escalator and the door to the bourse floor right before it opens.

And when it did, there was the customary violent explosion of activity onto the bourse floor, including, of course, me, as I launched myself directly at table #612 and then began setting up as quickly as possible.

Which on this day was really not all that fast, as I couldn’t get the tables set up right, the lamps didn’t work and frankly I was tired, but eventually we got there with 4 full cases of cool coins, many of which are brand spankin’ new and have not yet appeared on an EB let alone the site itself.  With our first couple of deals taking place right after.

But while we sold some pretty decent things, the story on this day was a buying binge of the expensive variety, which included the nicest 1793 Liberty Cap Cent we’ve had in years, and an absolutely epic 1876 proof set purchased after some intensive pricing analysis.

And a few more moderate coins mixed in as I made my usual 32 circuits of the room peering in every case for something that might look like a CRO coin.

Of which I found a few, but frankly not enough, a situation which always seems to right itself as the week here continues on.

Activity which continued right up until quittin’ time, at which point we headed to Gladstones on the water for a nice dinner and an end to a long and very tiring day.

Which will only be longer and more active Thursday, we predict, with an early start, the promise of many local customers stopping buy and many more dealers arriving, setting up and displaying more coins to choose from and the start of the Heritage auction mixed in.

The results of which will be discussed in totality right here on Thursday AM.

I tried something different on Friday, namely beginning the day with a loooong walk along the ocean which was refreshingly filled with photo ops, like this: 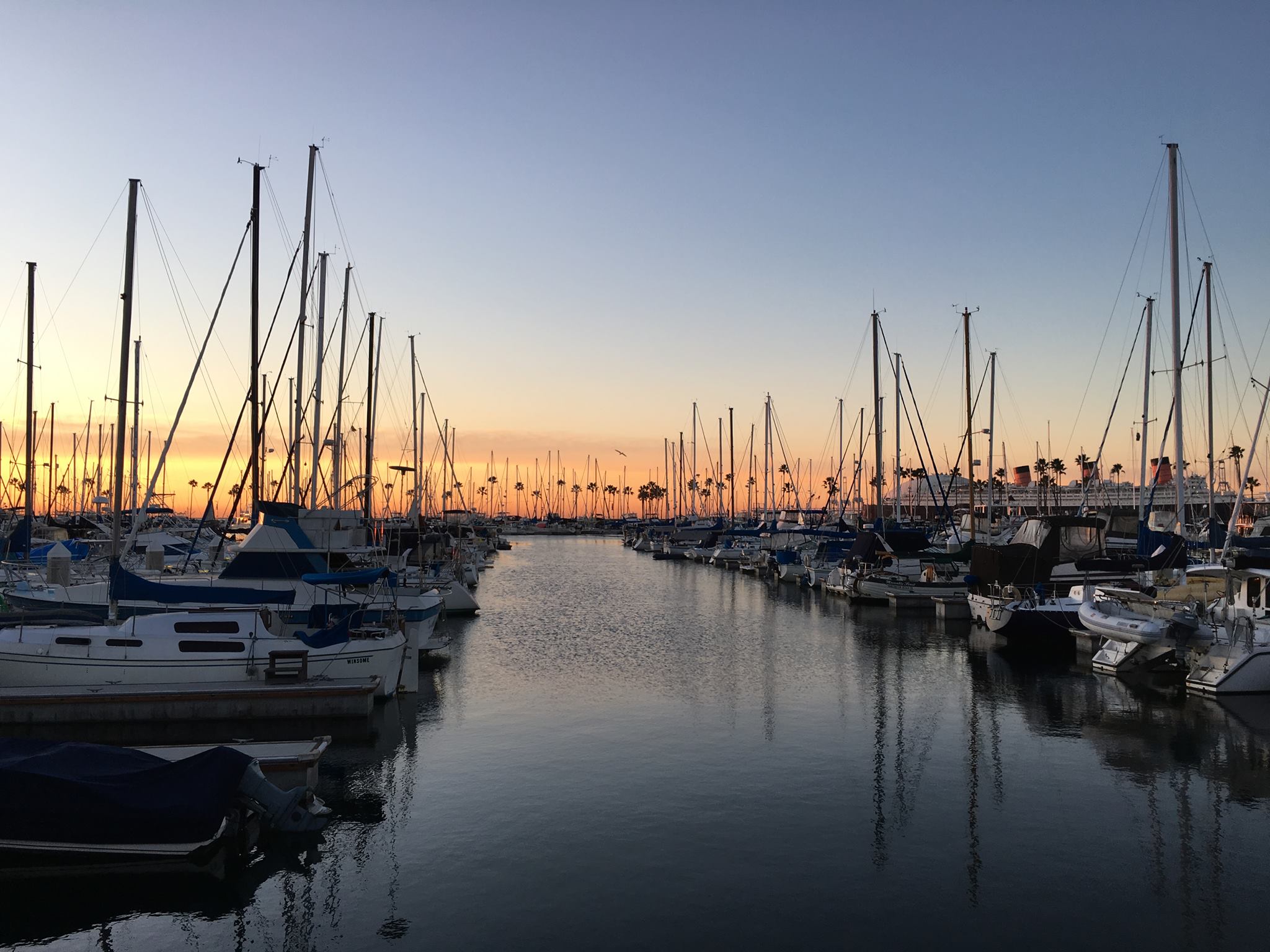 And then back to the hotel for breakfast on the fly followed by a straight shot to the convention center, arriving well after most other dealers already had.

Then diving into commerce, which on this day would get kinda crazy, with good sales, a couple of large scale trades and many cool NEWPs in all categories.

Starting with a neat silver Fugio restrike which we bought and then sold in a span of about 15 minutes.

Another bonus on this day: Free bánh mì lunch provided by Ian Russell of GreatCollections, possibly because we just sold an expensive item there, maybe because he is simply a nice guy, or perhaps because he ordered too many. Whatever the case, it was delicious. Which I also paid forward like Haley Joel Osment by giving the dealer next to me an extra one.

After which we spent about 20 minutes sorting through, around and under a big pile of Morgans and Peace Dollars with a good customer so he could sell them and put the proceeds into a couple of really nice coins, which is something we always advocate. I.e. at every price point and in all collecting specialties, we generally believe that less is more, and recommend collectors focus on fewer, better coins as opposed to assembling a giant group of average pieces.

A concept which would be in evidence again a few minutes later in the most complicated deal of the day, a numismatic 3-way in which your author took in trade 14 cool Connecticut and New Jersey coins toward 3 big ones owned by another dealer who then split the trade-ins with us.  Does that make sense?  I’m not sure either.

Followed by another deal which included about 15 coins that were hard to value, but which we bought anyway.

Now all we need to do is figure out what to do with all of these coins. Some will probably be offered straight way, others will be the ‘long game’ as we verify attributions and/or look for varieties so as to avoid another of those anti-cherry picks as described in excruciating detail in our 2015 TYIR.

And then it was over, so we headed back to the hotel for a drink and then up the street to King’s Fish House which I somehow had managed to avoid all these years but which was excellent, including the spiciest blackened catfish I have personally ever eaten while at a coin show.

So I will certainly have enough energy to participate in what we hope is a similarly action-packed, deal-laden, free-lunch offering Friday here in Long Beach.

And then write all about it here on Saturday AM.

As a dealer, you know you probably made a good decision about buying something at a show when over the next several days other prominent dealers come to the table and say something to the effect of “You bought that? – I was just going back to buy it – I should have pulled the trigger – I had a guy for it – if you want to sell it let me know – Aaaaaargh – etc., etc.” Not that that happens too often. Even in cases where other guys missed out on something and regret it they usually don’t verbalize it. Heck, there are plenty of people who’d take the opposite approach and try to denigrate it just for sport.

So of course that put your author in a positive frame of mind to tackle Friday, and I have to say that it really helped as I continued to buy cool coins around the floor of the mostly not-terribly-expensive-variety, sold some good things at the table (including an early dollar that never made it to the site), did another medium-sized trade, picked up some cool AU Barber Halves and then had some pretty good sushi and seaweed salad from Tokyo Wako.

After which I checked the progress of my Heritage lots and saw that despite some borderline wacko (lower case w, c before k) bids on my part, I was still outbid on the couple of things I wanted. Oh well.

No time to wallow though, as I was about to buried under an avalanche of coins coming back from PCGS. How many? Well, I had to go get another display case just to fit them all in and by the end of the day even that was full. Granted many of these are customer coins, but there was a pretty good haul of CRO items in there too, including our purchases from the recent Rudman deal at Heritage, one of the best AU58 Pillars we’ve had in, well, ever, and a new pop topping colonial. With at least another new bourse case full of grading to come on Saturday.

And then late in the day I found something truly fantastic, with an asking price of fantastic-and-a-half, but which still seemed like something I should get. But I couldn’t quite bring myself to pull the trigger yet, which of course put me at risk of being one of those guys noted in the first paragraph who laments that someone else beat him to it.

Which allows us to conclude this installment of the RR with a numismatic cliffhanger of sorts.

So to find out which side of that deal I end up on, tune in tomorrow, same time, same place, and see what happens with that –

Well, apparently our cliff-hanger is going to keep right on hanging, since I went to revisit the coin mentioned yesterday (after discussing it conceptually over the phone with two experts in the series before the show opened) only to discover that the dealer who had been offering it had already left.  Making this the numismatic equivalent of finally sitting down to find out who shot J.R. and discovering that your TV set is missing.

Which by any objective measure was a real downer. It does not end this storyline, however, which we expect will continue for another week or so, and if it does we’ll come back here with one of our patented though infrequently seen CRO RR addenda.

Other than that, however, Saturday turned out to be eventful on many fronts:

One of many positive outcomes at a show which turned out to be a solid B, pretty decent on the selling side, and robust on the buying side.

With a lot of those new coins about to be entered by yours truly into our next EB which will go out on Tuesday, February 9th at noon eastern time (unless there is another major snow storm which knocks out the power here which is looking like a real possiblity).

In either case, and as always, the schedule (or re-schedule) will be posted on our home page Early Bird-o-Meter straight away.