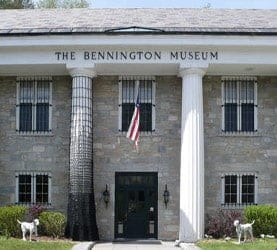 You’re in for an unexpected treat today as I recap my trip to the Bennington Museum (in Bennington, Vermont, of course) to view the collection of Vermont colonial coins.

This one took a bit of advance planning.

The coins are not on public display, though they can be viewed with sufficient advance notice. I called about a month ago, and then again about a week ago to confirm my visit for Thursday at 10:00 AM.

I arrived in scenic Bennington early and tooled around the Monument (think Washington Monument in half-scale) and through some beautiful historic neighborhoods, then back to the museum about 3 minutes early.

I went in and was pleased to hear that the young lady responsible for this collection was 1) there that day, and 2) remembered my appointment. I had a fear that they would disavow all knowledge of me or my quest, but they didn’t.

And so we went up a few flights of stairs, into a corner room and to a small table and there they were – or at least there were the boxes they were in – being wheeled out on what appeared to me to be a high school AV cart with a foam pad on top. There were two tattered cardboard boxes, one with a Richard Picker business card taped to the lid.

This looks promising, I thought.

The first box contained 36 (if memory serves) 2×2 envelopes which evidently comprised what someone once considered to be the museum’s ‘front line’ collection. The second box contained some 60 or so envelopes of ‘duplicates’.

Many of the envelopes looked really old, the rest looked ancient. On many were printed the name and address of Robert Vlack, while others had what appeared to be descriptions written by a former owner / collector. Some had a price written on them, typically a ‘5.00’ or ‘10.00’. And the envelopes were arranged, according to my guide (who told me that she had little knowledge of coins in general), in ‘approximate Ryder number order’.

Time to dig in. I donned the required white cotton gloves and then was left to handle the coins while she watched.

And I went through all of them, with a few particularly interesting examples catching my eye:

Ryder 1, the Immune Columbia, was a nice glossy F – VF with a distinctive planchet clip that looked immediately familiar. This is the actual coin plated in Mr. Vlack’s ‘Early American Coins’ published in 1965.

Ryder 7, a Vermontensium variety, was fantastic, bordering on spectacular. Probably an unc. by most anyone’s standards and the best Vermont landscape I’ve ever personally seen.

Ryder 9, the ‘Baby Head’ type made the entire trip worthwhile. The Bennington Museum has 5 or 6 examples in total, including several average circulated pieces, and then 2 head and shoulders above the rest.

The first is a technical AU with choice color struck on a typically flawed planchet. This piece is also plated in the Vlack book, though in hand it was finer than one might have imagined when viewing that picture.

The second Baby Head needs no such qualification, as it must certainly be the finest in existence. I would call it an MS63 by today’s standards, on a perfect, unflawed planchet, very sharply struck with every last detail in evidence, and perfect color. I would mention the nuances of luster remaining in the devices, but I’m afraid that may put your average Vermont copper collector over the edge. They were there though. This is the piece plated in the Breen Encyclopedia, by the way.

Ryder 15, the very rare 1787 Bust Left variety, was a disappointingly low grade, corroded piece with some verdigris on both sides.

I could go on and on, but you get the idea.

I believe that if the Museum’s ‘front line’ Vermont copper collection was compiled from the two boxes (in some cases I preferred the duplicates over the coins in the main box) the resulting set would have to rank very highly among any ever assembled by anyone, anywhere.

Next step is to have this collection photographed, which, I was informed, would be possible. While a few pieces were, as noted, photographed long ago, I thought it would be nice for researchers and collectors to see these coins in color photographed using modern techniques. That will present a bit of a logistics challenge, but for such a cool opportunity it seems worth jumping through a few hoops.