Ladies and Gentlemen, it is time to review the month of February numerically starting right now:

28:  Number of days in the month, of course.  And also the number of days we worked (this is absolutely true and something to keep in mind for those who are contemplating a relaxing career in numismatics).

None:  Times we complained about it (since we would be doing this anyway if we didn’t run it as a business).

3, but really 2:  Coin shows we attended this month (since Long Beach was a January-February wrap-around, and Baltimore was the same for February-March).

Five and a Half Blue PCGS Boxes full:  Total number of new coins purchased there (going strictly by the dates on the invoices).

70-something:  Coins purchased between shows, many sent to us by serious collectors who knew we’d make strong offers.  Spoiler alert:  We did.

Around 38%:  Number of all those coins which were ready for market as is (we actually like coins in this category and would be pleased if this percentage was larger, since it takes all the risk of grading and CACing and all that out of the equation and saves us weeks bringing items to market).

Amazingly, 4:  Number of New York Excelsior Coppers handled by us this month (which has to be a new record for any coin dealer).

33:  Number of American Eagle 1 oz. gold coins we received in trade this month – all toward one of those 4 coins above.

A matter of hours:  Amount of time we owned same before selling them (our typical M.O. when handling any bullion items).

2:  Coins we rejected as counterfeit this month (both raw, one a rare and highfalutin colonial type, one a pedestrian U.S. coin which would have been worth about $40 if real).

Around 2,350:  Age in years of the oldest coin we sold this month (it never made the website, since a customer called minutes after we acquired it at auction and snapped it up instantly): 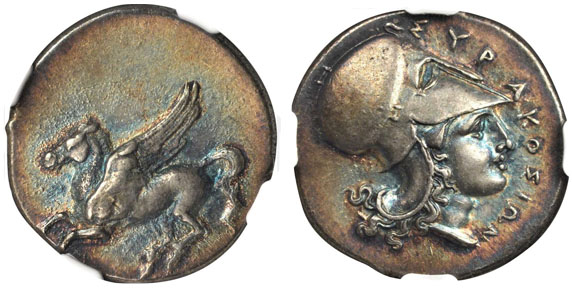 A paltry 800:  Age in years of the oldest coin that actually made it to the list.

11 so far:  New website companies we interviewed in February to replace our long time partners, John and Helena from Identry, who are retiring from the business.