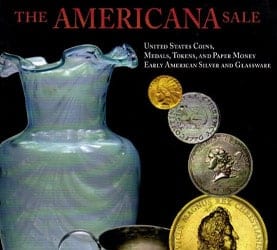 This just in – it was very, very cold in New York.

It was also not very crowded on the streets and sidewalks, which might have been because everyone was huddled in doorways trying to keep warm, or because the economy has taken its toll on people hanging out in NY shopping and going to Broadway shows.

Whatever the reason, it made my cab ride from Penn Station to Stack’s during rush hour on Tuesday AM the fastest I can ever recall in years of making that same trip.  And though I arrived before the specified lot viewing time and wasn’t sure if I’d have to wait, I was pleased to find a couple of well known dealers already there rifling through the boxes.

Now, I did review the catalog carefully in advance, including on the train ride down in which I listed all of the key things that seemed CRO-like, and frankly the list wasn’t very long.  So I didn’t expect to be overwhelmed by the actual coins.

And I wasn’t.  Neither was Dave when he arrived a few minutes after me.

It’s not that the coins weren’t nice – many of them were.  But this sale was long on varieties and esoteric material, and short on the choice and beautiful colonial and federal type coins we typically chase.

The colonial session in particular was replete with unusual looking coins, odd overstrikes and scarce but not all that attractive die varieties, many from a consignor who specifically sought out such pieces.  The ones that were attractive were pretty common and thus not all that exciting, and by the end of viewing we were down to maybe 5 coins we intended to bid on.

In federal, it wasn’t much different, as we liked just a few pieces.

We also looked at all of the other assorted Americana, including glassware and silverware (much of which was displayed out in Stack’s front lobby as you might see in an antique store).  It looked neat, but we never seriously considered bidding on it since we don’t know much about that stuff and a cardinal rule of coin dealering is to not buy something you don’t know an awful lot about.

Anyway, that left about an hour to grab a quick lunch across the street with a collector friend before the auction would begin at 1 PM.

And we got back, picked out fine seats, opened our catalogs and prepared for the first lot to be called when we realized that the colonials would be about 800 lots into the session, meaning we’d have to sit through about 4 hours of stuff we had little or not interest in before getting to a lot we actually planned to bid on.  Which struck me as less than ideal scheduling, especially given that most of the people in the room probably felt exactly the same way.

Also, it was absolutely freezing in the room, which meant that a lot of us had coats on and were uncomfortable while we waited through the mechanical banks, assorted medals, etc.

And then, when we f-i-n-a-l-l-y got to the lots of interest to us, it was time for the dinner break.  Stack’s had a nice buffet out in the lobby, which was appreciated, though as were eating in the same room as the Americana displays I admit I was slightly tempted to use one of the large early silver spoons to eat my pasta, and then drink a diet coke from the handsome Ephraim Brasher tea pot.  Thought better of it though.

Lot 7008, a St. Patrick’s Farthing described as AU50 but with unattractive pebbly surfaces and unnatural gloss brought just $2,530.  An original, attractive AU would have been multiples of that number.  Maybe multiples of multiples.

Lot 7026, a St. Patrick’s Farthing in silver in Fine or so, brought a surprisingly high $25,300 to a specialist in this series.  This was evidently a unique die variety, and brought a price commensurate with its rarity (and far in excess of what one might have expected of a type coin in this grade).

Lot 7077, a Hibernia Farthing in silver graded MS64 by PCGS, opened and closed at a very low $9,000.  That coin looked awesome in the catalog photo, but in hand it was a lifeless, over-dipped piece with a few surface marks that we would not want to put on our site at any price.  I personally would have graded it about MS61, but I note that I am not a professional grader.

Lot #7099, the 1724 Hibernia Pattern ‘Orb’ Farthing in XF, brought $8,625 all-in.  That was a decent result, as this same coin sold for $5,462 when last offered in January 2001.  Interestingly, Stack’s cataloger under-described the rarity of this item noting that it was one of “10 perhaps 11” known (and thus repeating the error in their own 2005 Ford catalog).  That earlier list included duplication, and the actual population of this issue is 7, with an 8th specimen mentioned in the Norweb III catalog as ‘Ex Seaby’ but not seen.

Lot #7203, a mildly unnatural looking Continental Dollar in an NGC MS65 holder, opened and closed at $220,000.  I know I’ve seen this coin recently in a dealer’s case, so I was surprised to see the following comment at the end of Stack’s lot description of this item:  “Stack’s is selling this coin pursuant to the terms of a security agreement in favor of Stack’s”.  The same note appeared after another expensive piece later in the catalog, which had us all speculating about exactly what it meant and who was involved.  We’re quite sure the whole world will know soon enough.

Lot #7233, a profoundly double struck Vermont Ryder 31, brought a strong $14,950.  That was a cool coin, and typical of the really unusual sorts of things in this session.

Lot #7509, a very attractive Washington Skull & Crossbones Funeral Medal, brought a very robust $25,300.  Especially when you consider that this exact same piece brought $12,800 in the May 2004 Ford sale, and had been offered by a well-known dealer at several shows last year for $15,000.  Pointing out once again that even in the internet age, with more information available to collectors and dealers than ever before, the numismatic market remains a very, very inefficient place.

In total, we bought just 3 coins in the session, then headed back to our hotel a few blocks away so we could crank up for the federal session scheduled for 1 PM on Wednesday.

But by the time that came around, we decided to leave a few bids on the internet and headed home.

In all, I would describe the results as lackluster, with only the most interesting or unusual pieces bringing really good money.  Lots of the frankly so-so and anti-fresh big ticket coins didn’t meet their high reserves; lots of the common and generally available unreserved coins were soft.

If there had been more coins in our area of interest, we’d have been in there swinging aggressively.  But there just weren’t.  Leaving us to seek out cool coins from other sources.

Our next RR will be in a few weeks from a private buying trip scheduled for the end of this month.