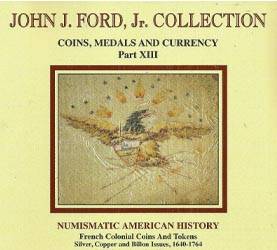 The latest installment of the John J. Ford collection – the French Colonial Coins and Tokens and Betts Medals Part I – came to auction at Stack’s on Monday in frigid New York City.

It was a bit of an odd set-up, I thought. It was scheduled on a holiday, in the afternoon and on a Monday, which meant that many of the bidding combatants arrived for lot viewing at 10 AM, pored through a few hundred lots of similar looking items and then rolled directly into the auction room.

The process had a frantic air, and there was not nearly as much time as in past sales to compare notes and thoughtfully plan bidding. Certainly those that had viewed in advance and carefully prepared had a big advantage.

And the schedule certainly had an impact on attendance, if not prices.

While the sale of Ford’s Massachusetts silver coins in October was breathless SRO, this time the crowd was pretty thin (in numbers, not physiques). There might have been 50 people in the room, widely spaced in their own carefully selected strategic locations. Many of the usual suspects were there – including most of the well-known colonial dealers and serious collectors – but a number of new faces appeared and, for the first time in my experience at Stack’s, French could be heard being spoken throughout.

French Colonial coins are a ‘challenging’ area in colonial numismatics. The series has not been well publicized in the past and there has been some disagreement among experts about what is and is not part of the series. On the other hand, the coins themselves are fantastically interesting in design and composition, undeniably historically significant and though they are legitimately rare (particularly in high grade), many are still affordable in comparison to other areas of the market. We suspect, as has been the case in the past, that the publicity related to this sale and likely reappearance of many of these items at subsequent sales will spur greater interest in this series.

The auction itself was a mixed bag.

Common and low-grade items hammered for just tens of dollars with lot 5 a good example at $60 and lot 14 at $45, both to the book. This was certainly the first time we have seen prices like these at any of the Ford sales. But we knew it couldn’t last . . .

The first indication of real enthusiasm was lot 19, a beautiful 1658-A Billon douzain at $16,100 to a serious collector. This piece was also noteworthy for the cataloger’s use of the word ‘chimerical’ in his description of the item, the first time I have seen that word in an auction catalog in my entire life.

The pretty and underrated 1670-A 5 Sols coins, lot 20, 21 and 22, went relatively strong first to last with the highest at $11,500, preparing us all for the anticipated bloodbath over their larger brother, item 23, the beautiful and very rare 1670-A 15 Sols. Cataloged as the 2nd finest of 14 known and pedigreed to the collection of Archbishop John Sharp (who began collecting coins in 1687, for cryin’ out loud ), this was to be a highlight of the afternoon. Pre-auction estimates of $40,000 to perhaps $100,000 were left in the proverbial numismatic dust as it finally succumbed at $149,500, five times the most recent auction price of a lesser specimen sold in Paris in 2000. Gulp.

Lot 26, the unrecorded and apparently unique proof 1767-A copper Sou landed at $27,500 hammer. Its unexpected appearance in the catalog spoke to the breadth and depth of the Ford holdings, as here was a coin totally unknown to the collecting fraternity before the catalog was distributed. Whats more, it is the first and only proof striking of a coin that is decidedly rare in ANY high grade and exceedingly rare in anything approaching choice uncirculated. Seeing this in the Ford sale could be equated to finding a Gem proof 1799 Large Cent in an old time collection of US coppers. Amazing.

Noteworthy as well was lot 31, the 1712-AA Half Mousquetaire with an error in the legends at $23,000. Of all of the items in the sale, this was one where most of us had not even the slightest idea what the value could be. Just another example of how hard it is to estimate prices on apparently unique coins that simply have never publicly traded before and will be unlikely to reappear on the marker for a very long time.

Similarly, lot 40, the uncirculated and unusually thick 1710-D Mousquetaire landed at $16,100. We can safely say that this coin will never be slabbed, since it was too thick to fit in one.

Lot 66, a more typically sized 1710-AA Mousqetaire but in wildly atypical Choice Uncirculated condition seemed pretty reasonable in comparison at about half the price.

And so it went. In the long, long (looooooooooong) list of Sou Marques that followed, anything rare or in choice in condition was aggressively pursued by a number of bidders.

From that point on the sale lost some steam, with only moderate interest in the entire run of John Law coins and with the ‘Le Chameau’ shipwreck coins (the last portion of the colonial coins section) hammering for prices that were generally well below anticipated levels. Average examples for the latter hammered below $1,500 with most of the finest examples landing just above $3,000. Lot 456, the final coin, the interesting 1725 Pau mint example in Choice Uncirculated grade, was an exception and the most expensive of the entire run, closing at over $8,000.

The sale continued on through Franco-American Jetons and into Betts medals on which we did not participate.

Apparently, this closes the book on the Ford sales of colonial coins and, if that is the case, it has been a fantastic run the likes of which we will never, ever be seen again. We were fortunate to have been present at every one and to have bought a coin or two along the way.