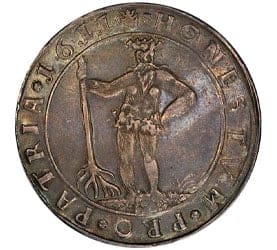 Sales continue to be robust around here, which is delightful, except for the part about battling yet another impressive (or impressively disgusting) New England snow storm in order to ship out the latest round of boxes.  How bad is it?  Well, earlier this week I went to the PO at about 10 AM to mail a box and discovered that they were literally closed due to weather.  So despite their fancy “Neither snow nor rain . . .” creed, we were workin’, and they weren’t.

Prepping for the upcoming Stack’s sale and researching some of the coins in that session.  Some rare stuff in there, but most of it lower grade and not exactly CRO material.  Still, I’m sure we’ll find enough coins to buy and manage to spend to our budget (we always seem to).

Received in the mail yesterday a totally unsolicited, nicely toned Wildman coin on spec. from a world coin dealer-friend.  We like when that happens!  And will definitely be buying it.

I continue to be surprised at the volume and intensity of discussion on the PCGS US Coin Forum about the PNG (Professional Numismatists’ Guild, of which our own DW is a member and your author, JA, is not).  My conclusion:  People are mad as hell about coin doctoring, and need to blame someone or some entity for it, though they aren’t really sure who to blame, or how to do it, and so the PNG is a convenient target.

Have been working on a large commemorative half dollar deal with one of our customers, which has included laying out all 144 coins repeatedly, comparing the front-line coins to his dupes, making sure he is keeping the best examples of each (which in several cases is too close to call, and explains why he has kept many of the dupes for a decade), regrading some of the ones that look silly-low in their current holders, etc.  This has been somewhat of an education for me as this is not my area of expertise, with a few conclusions as follows:

Today Dave will be off to do another appraisal (his third this week), which will, hopefully, go better than the last one in which he went through a group of coins an ‘investor’ paid just north of 100K for in the late 1980’s, and came up with a current value of $23K.  Of course, the coins were not worth anywhere near $100K at the time he bought ’em, but that is of little solace to the owner.

And now I’m off to finish reconciling our 2010 financials, which is absolutely no fun at all, and includes spreading out documents all over the place, inevitably losing something important, swearing repeatedly, checking every logical place it could be in a futile search for it, but then eventually finding it misfiled with my wife’s recipes.  Still, it sure beats shoveling the driveway.