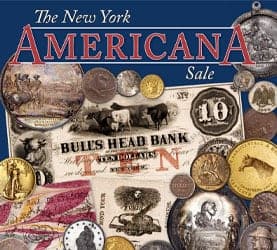 Good morning everyone, and welcome to this special bonus edition of the RR recapping my one-day jaunt down to NYC for some intensive lot viewing at Stack’s.  This would be for their America sale, of course, which does not begin until next Tuesday, but which contains so many lots of potential CRO interest that I figured it was worth the trip for some advance scouting.

And our day would begin very, very early, as I left for the train station before even the dog was awake, arrived before the ticket counter was open and immediately suffered what might have been the worst papercut ever inflicted by a coin catalog.

Fortunately, the station staff was able to provide your author with a band-aid.  Unfortunately, they only had those huge square ones which come in the variety pack, but which no one ever actually uses (except in this case), allowing me to enjoy the ride down with a giant ridiculous thing on my finger.

Not that it interfered with my copious note-taking, as I spent the next 3 hours or so reading almost every description in the catalog, agreeing with most, chuckling at a few, and ultimately listing the things of highest potential interest so as not to screw up and forget to view any of them.  In the process, time flew by, and by 9:10 AM I was on W. 57th Street, where I saw the spiffy new navy blue and gold awning on the Stack’s store for the first time (replacing the dingy off-white one which was probably there for the last 30 years or so).

I wasn’t going there, though.  Instead, I was headed across the street to Stack’s new offices where lot viewing is held, with your author the first non-employee to arrive for the day (not surprising, since posted viewing hours did not begin until 10).  But a Stack’s staff member accommodated me, ushering me into the combination lot viewing / auction room (which will actually be doing double duty when the sale kicks off next week).

And I was able to spend the next 3+ hours in steady viewing.  During which a few other collectors and dealers arrived, including a friend who I later had an unplanned lunch with at the Redeye Grill up the street, talked about coins for an hour, and ate the spiciest arriabata I’ve had since the 2006 ANA in Denver.

Then I was back for another 3 hours of viewing before reaching the point of total and complete coin overload at about 4 PM, just in time for the long trip home to New England and the conclusion of a fun 18-hour workday.

Dave will head down next week and view on his own, after which we’ll compare notes, argue vociferously, insult one another and ultimately hone our list down to the few dozen things we’ll bid on in this session.  In the meantime, here are my thoughts so far:

In many sales these days I see a lot of coins that I recognize from dealer inventories or recent auctions, and while that was true of a small number of things here, there were also a ton of coins that have been off the market for a while.  Which certainly makes things more interesting.

The environment at Stack’s is downright friendly these days.

Anyone embarking on the path of building a complete set of NJ coppers by Maris number should be prepared to settle for some rough looking coins along the way.

I doubt very much if you would have seen this description in a Stack’s sale in recent years:  “deep rose, gold, and electric blue highlights artfully applied by someone other than Mother Nature.”  But those exact words are used to describe lot #3266, a raw unc. Seated Dollar.  And that is a good thing in my humble opinion.

Our next RR will recap the sale next week in sufficient detail to make it interesting (but not so much that we tick off all the consignors, the bidders and the auction house in the process).