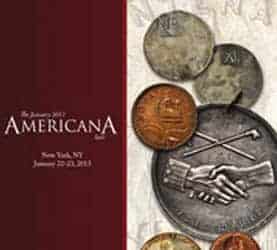 Aaah yes, when the numismatic calendar turns to late January, it can only mean one thing: It’s time for another fantastic Stack’s-Bowers Americana auction held, as always, on fabulous 57th Street in Manhattan.

Your author would, of course, be there, in a concentrated (and totally exhausting) 3-day adventure in which I crammed in some intensive lot viewing, a nice dinner with some dealer friends, almost no sleep at all, a migraine headache and, finally, bidding in the colonial portion of the session that ran (after a gazillion medals and tokens on which I did not bid on) from about 5 PM on Tuesday until well past 1 in the morning.

And while there was a lot to cover here, with many interesting coins from several different consignors in a robust 800+ lot session, I’ll just touch on some highlights in my usual no-holds-barred style virtually guaranteed to offend someone (or possibly everyone).

Starting with lot #10615, a very wholesome, attractive and newly discovered New England Shilling in a PCGS XF40 holder which sold for $352,500 after a short burst of floor activity (this and all other images courtesy of Stack’s-Bowers): 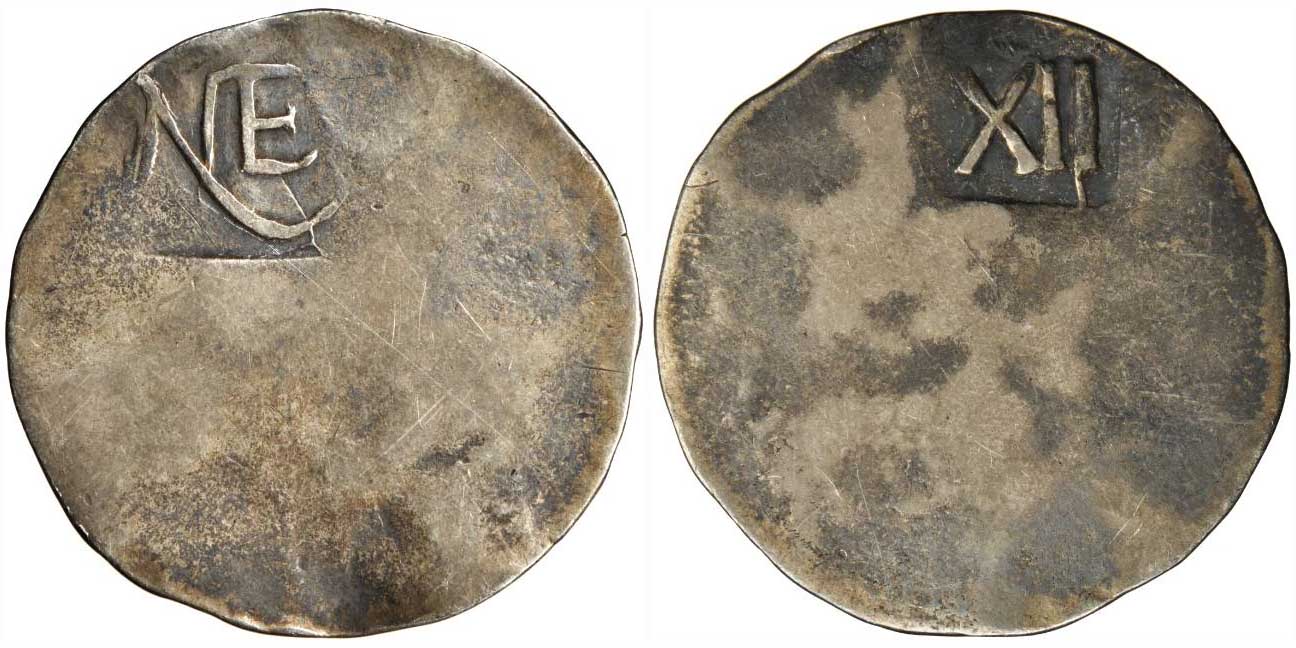 That specimen looked about as nice as a few of the AU examples that have sold in recent years, though I’m not sure that the grade makes much difference for coins that are about 85% blank planchet.

The next lot was notable too, though for different reasons. That would be #10616, a high grade but slightly toaster-shaped Oak Tree Shilling which brought a surprisingly strong (to me) $30,550 all-in: 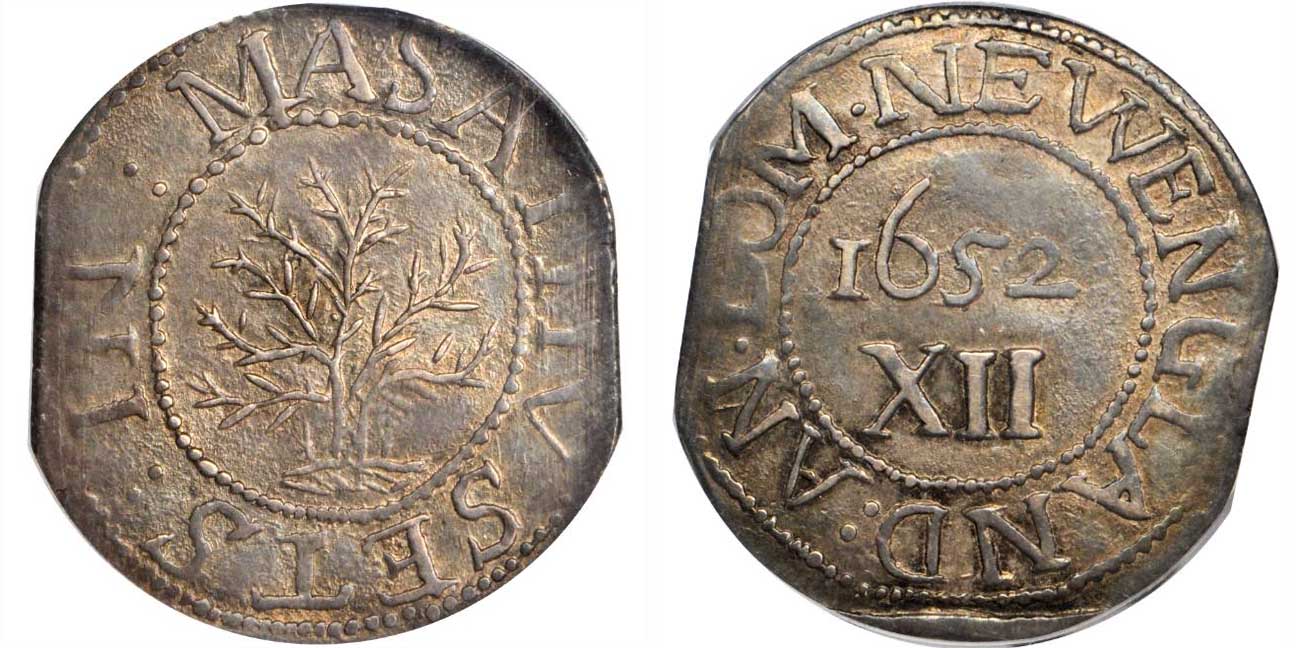 I say “surprisingly” because that same coin had been in a dealer’s inventory for the last several years being offered at $24,500 with no takers.  And if I had known that there was an opportunity to make 20% or so, I’d have bought it a long time ago and consigned it myself (though of course no one knew that at the time, and the result could just as easily been a 20% loss). Oh well.

And then proving that even badly bent coins can still command big prices, this imperfect Higley, lot #10659, brought what to me was a startlingly high $47,000: 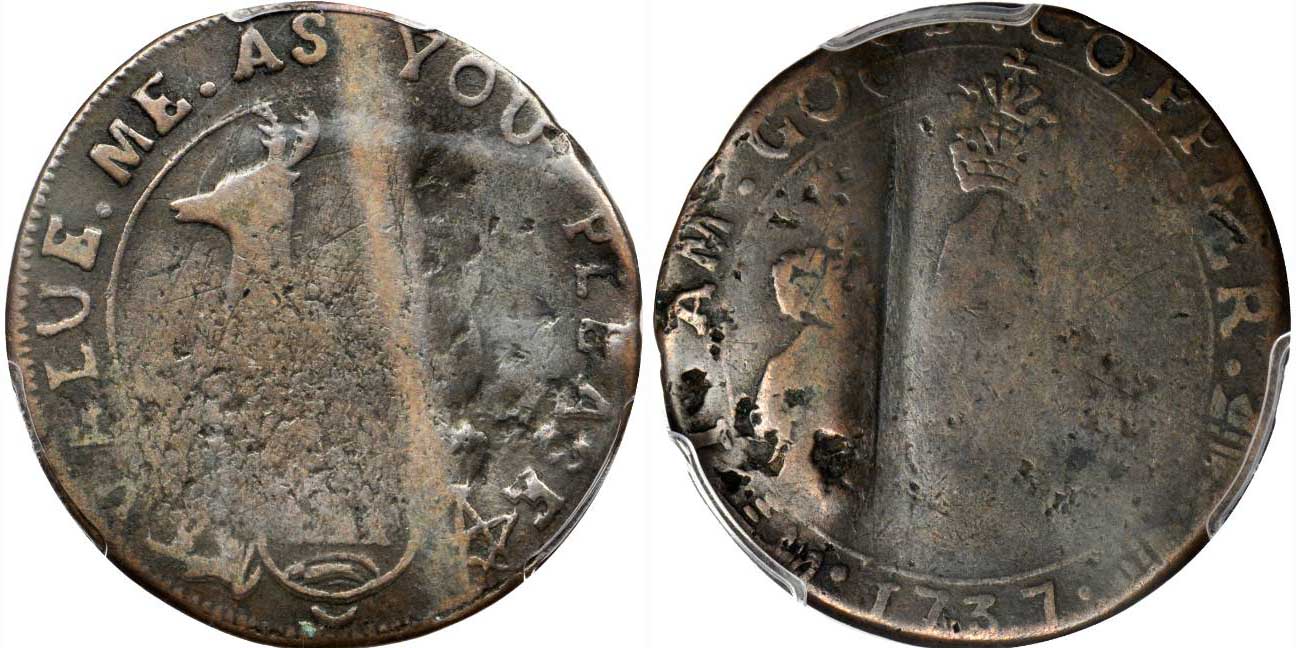 My first thought: The last one we sold (which was in a PCGS G4 holder and not bent) seems kinda’ cheap now. 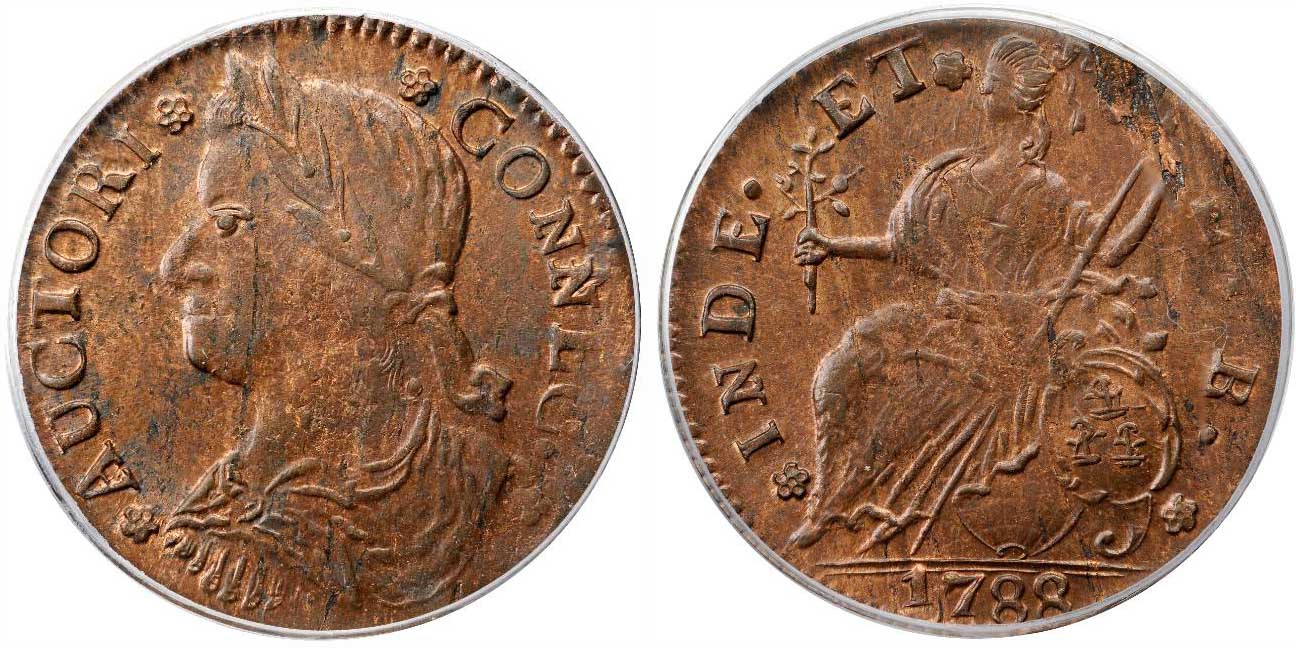 Neat coin, and obviously rare with that much original (and I did think it was original) red remaining, though it wasn’t particularly well struck and had a few noticeable planchet flaws. So in my view the color alone pushed it to $25,850. 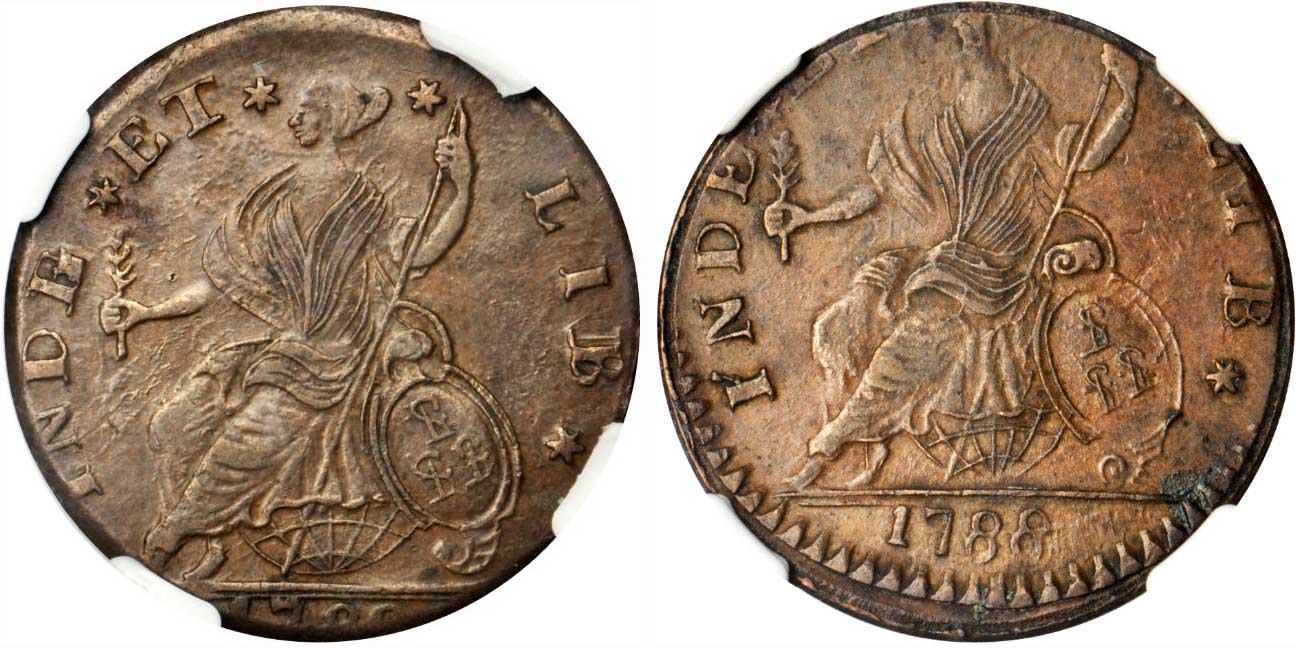 I’ve never personally been into these sorts of concoctions, undoubtedly made on purpose to create an oddity – but evidently there were at least two bidders who strongly disagreed with me.

And what about lot #10774, a Continental Dollar in an AU58 PCGS Secure holder with either a striking anomaly or some PMD (post mint damage) on the upper obverse which realized $61,688: 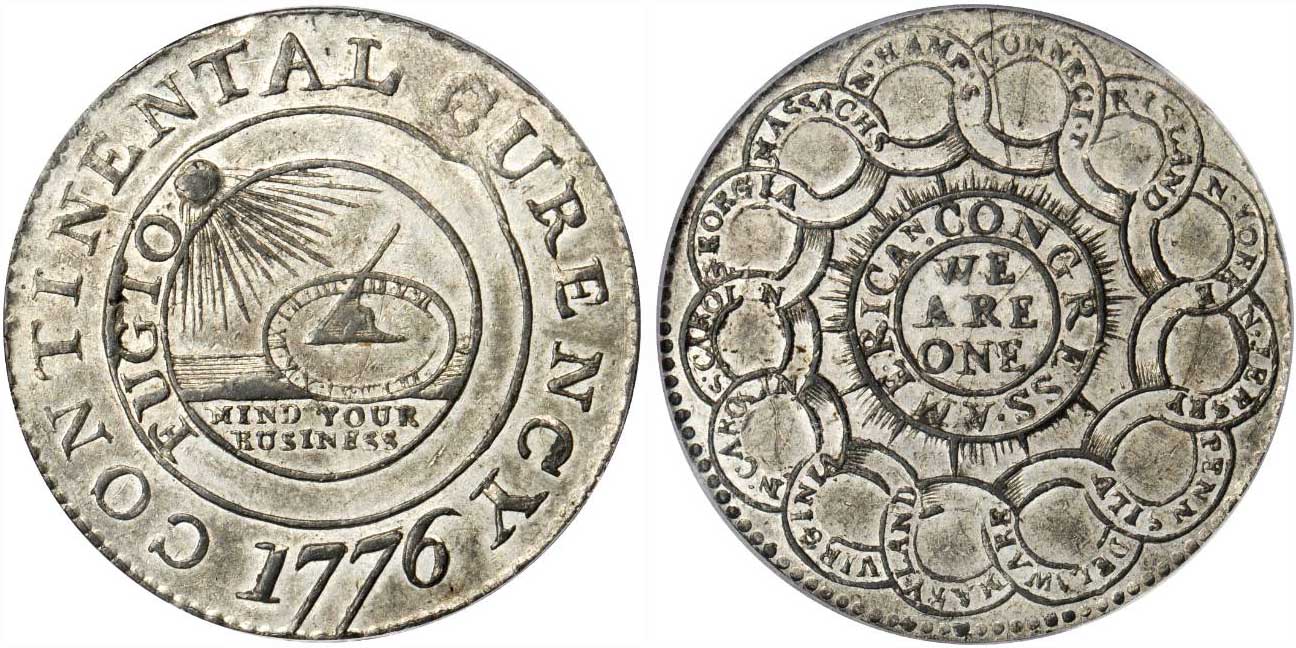 Did you know that this same coin sold less than a year ago at Stack’s March 2012 auction in an AU58 PCGS Green Label holder with a CAC sticker and brought $71,875? That seemed like a ton of money to me at the time; we can now confirm that it was.

Leading us eventually to the Ted Craige portion of the consignment, Part II, including many different issues of varying quality, all part of an old-time collection which had been off the market since around 1970. 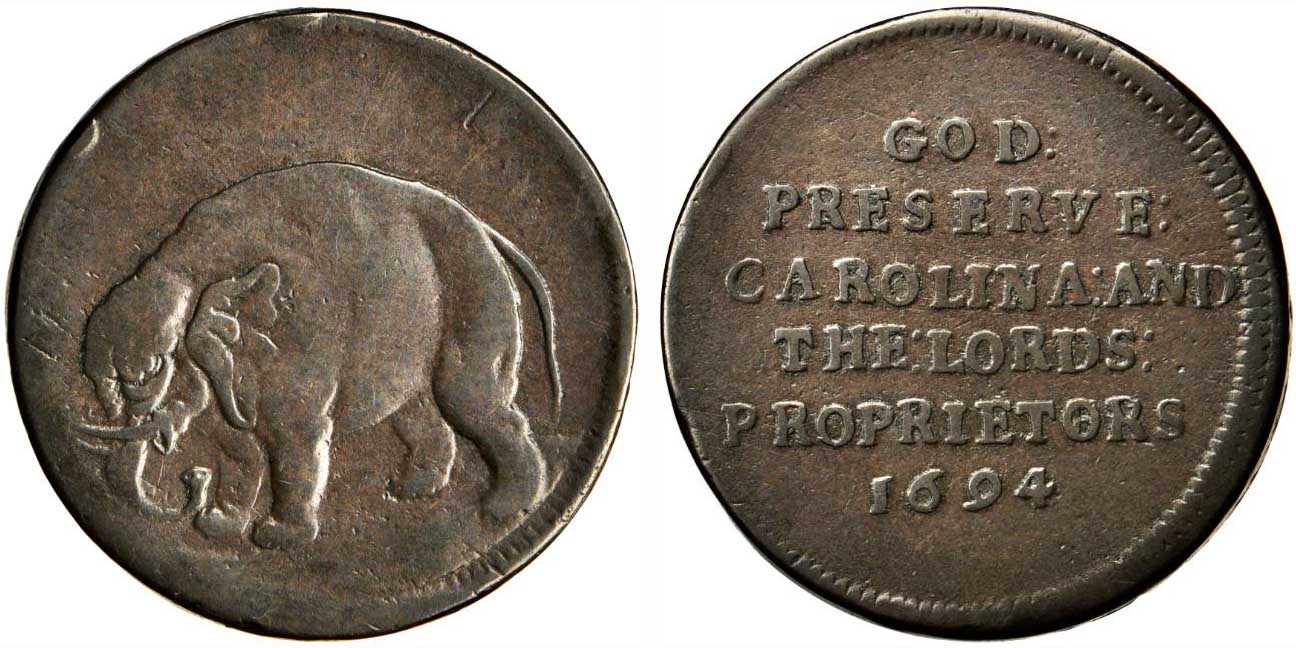 That had a couple of pretty noticeable rim dings, and a few scratches, but good color and a strong strike which seemed to carry the day.

And it was just one of a number of infrequently seen Elephant Token varieties in this auction.

Followed soon after by some sixty (60) Massachusetts Copper coins, all raw, many of which had some issue or other (cleaning, little scratches, small stains, marks, etc.) that either precluded slabbing, or precluded me from bidding on them (or both). Seriously – I had not a single bid on any of them, which surprises even me, since I like this series and would always be a buyer of the right examples. Others must have felt differently, since prices were pretty robust anyway.

A long run of 187 Connecticut Coppers were next, containing a gaggle of rare die varieties in relatively low grade, but not much (at all) of the choice type that I would normally try to buy. 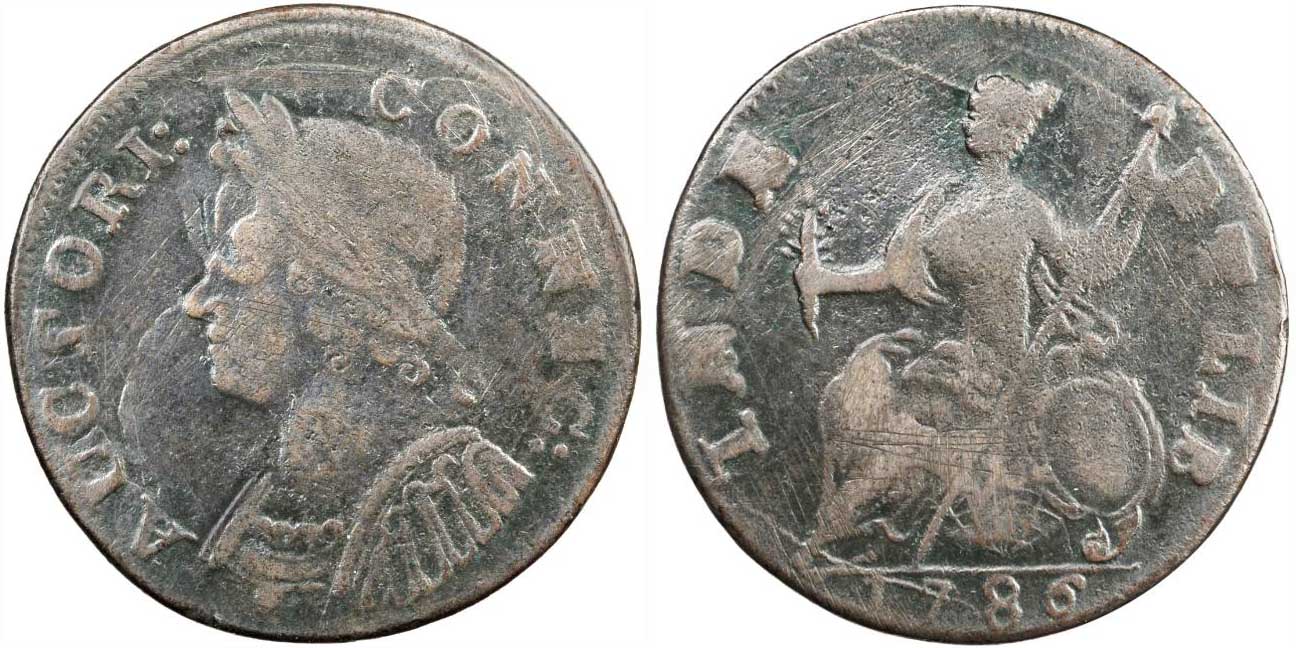 The first such overstrike on an ‘86 Connecticut, and a sufficiently big deal to realize $5,288. 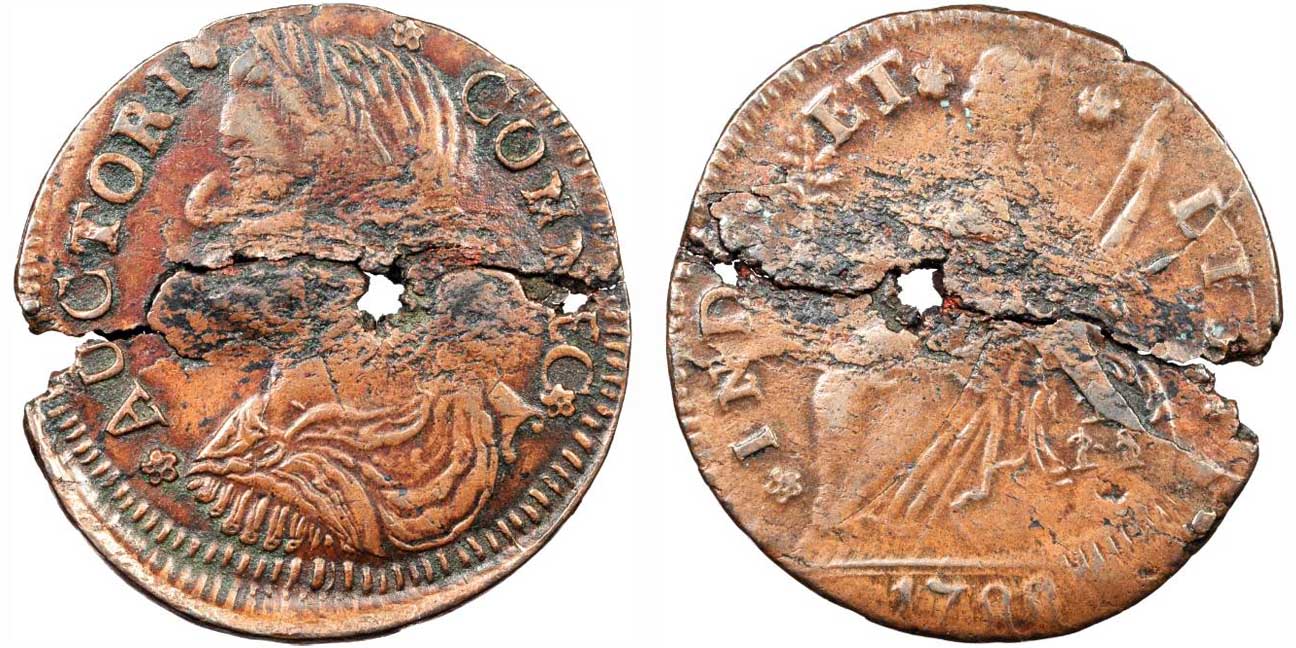 And was described by the cataloger like this: “AU50.” and “Technically barely worn, with significant remaining luster and extraordinary detail; indeed, by sharpness, this might be finest known. Alas, the planchet it was struck upon is little more than scrap, with a horizontal striation across the center so severe that it is a wonder the coin remains intact.”

It sold for $1,175, which surprised me – I actually thought it would sell for much more.  I was however even more surprised that this coin survived lot viewing without being broken in half, since it seemed so fragile, was housed in a soft flip, and was yanked out of the box and viewed by hundreds of people, many of whom have enormous hands and are not very careful.

But the real star of this event would be Mr. Craige’s collection of NJ Coppers, comprised of an impressive 95 different varieties (i.e. Maris numbers), pus some duplicates.  Including some lovely condition census pieces like lot #11324, a delicious golden brown AU Maris 24-p which sold for a strong $9,400: 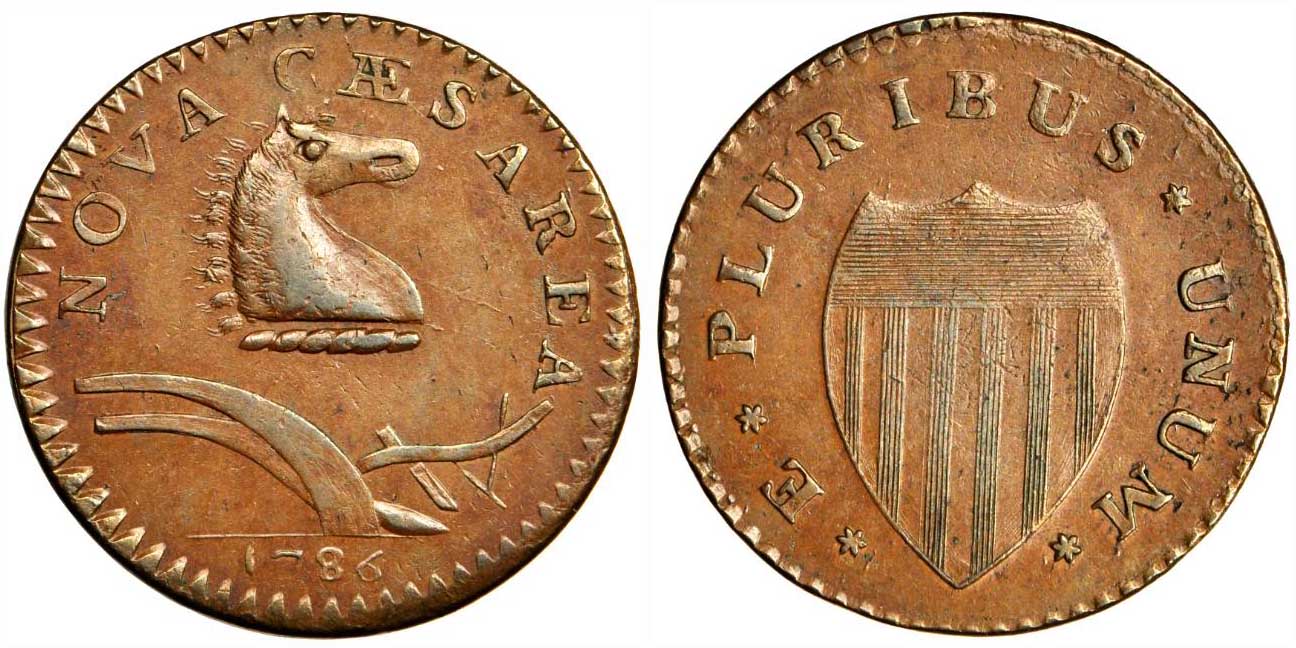 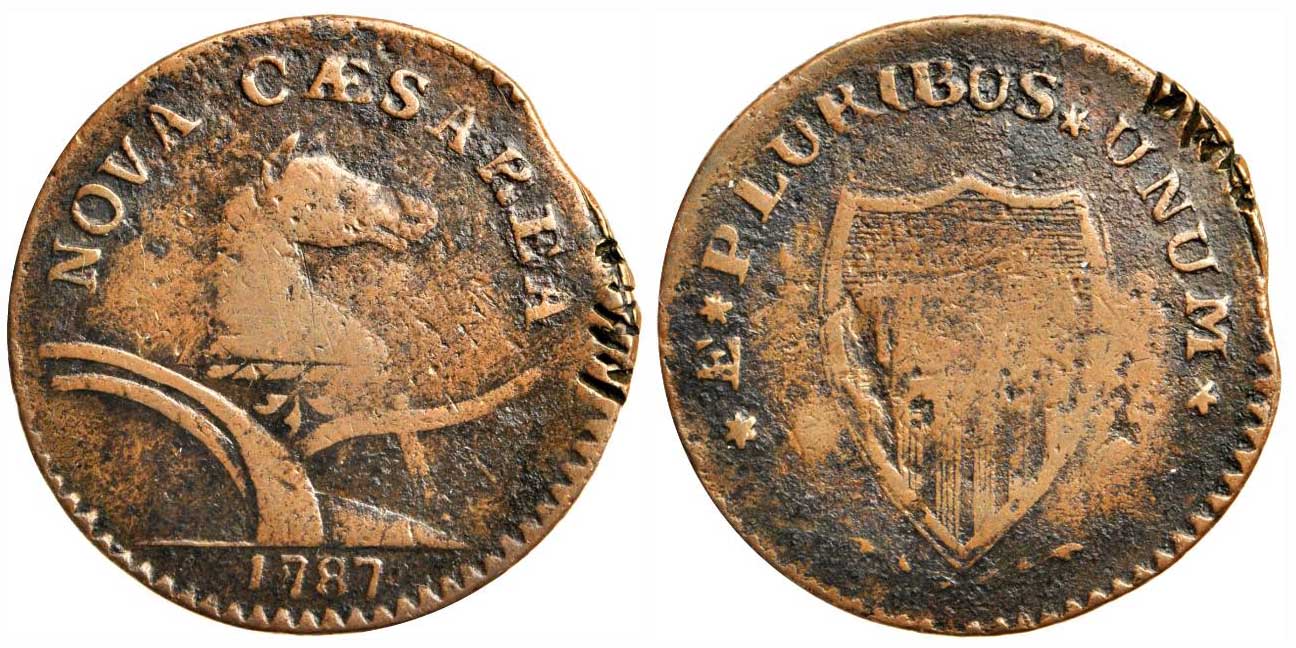 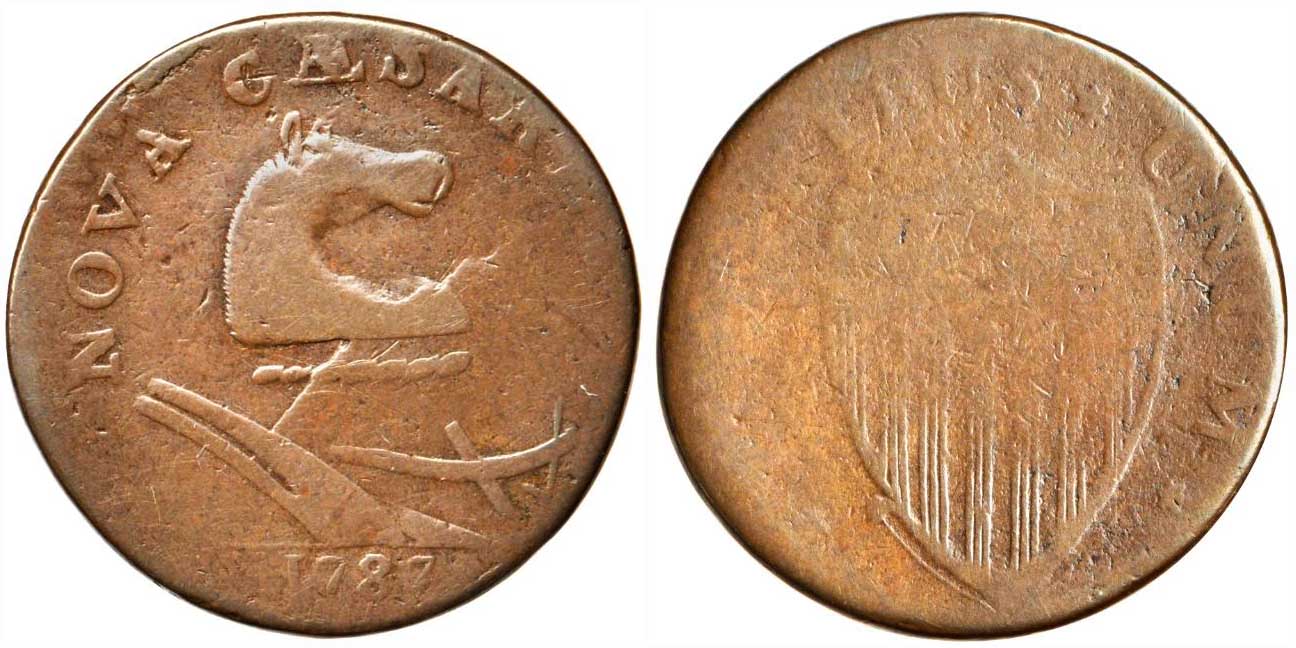 Not to say that there weren’t some ordinary coins too, there were plenty. Like lot #11359, a common Maris 43-d (that Mr. Craige evidently saved due to its late reverse die state) which sold for what I thought was a super strong $253: 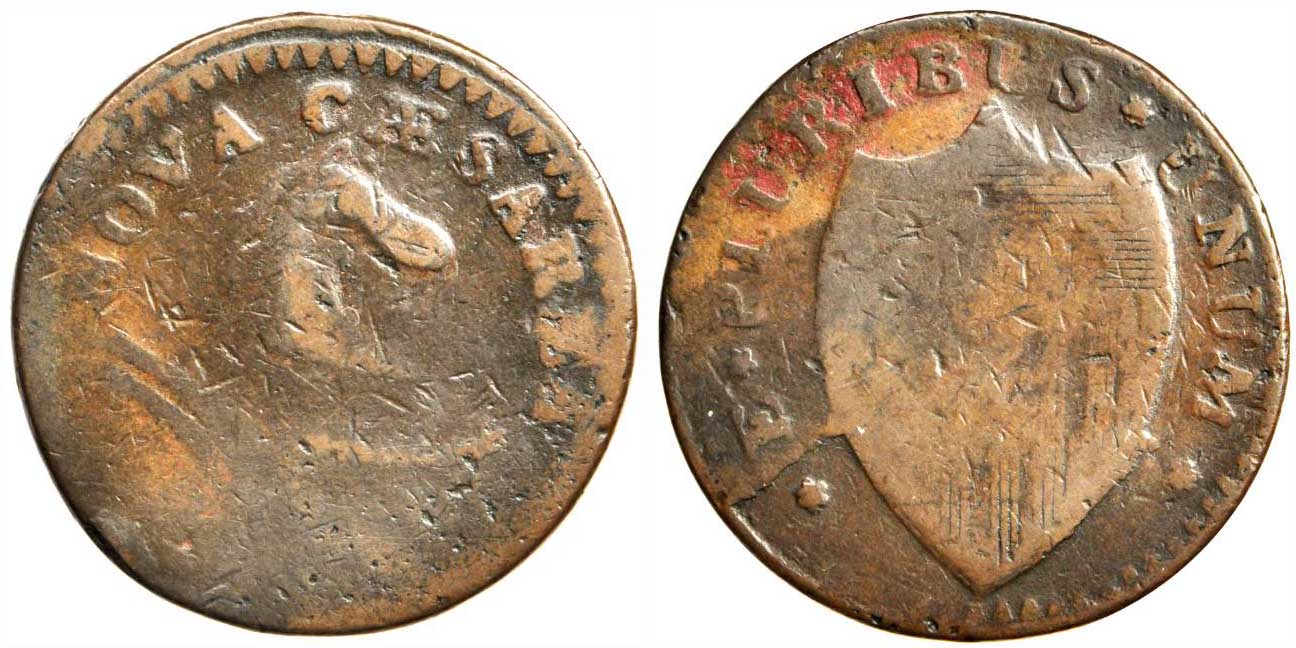 And while the coins themselves were interesting, I was just as intrigued by the bidders and their buying behavior.

It seems to me that even though the the NJ Copper collecting community (which was well represented here) overwhelmingly favors raw coins, they have an awful lot in common with the PCGS Registry collector community, in terms of their careful tracking of the condition census of each variety, the competition to achieve completion (in the form of striving for a high variety count) and the hefty premiums they pay for the finest known or cc level coins which may be, in many cases, just a smidge better than the next best pieces.  Which has often made me wonder what would happen if PCGS started slabbing NJ coppers by Maris number . . . I’m guessing that one day we’ll find out.

And then we were on to Mr. Craige’s Washingtonia, another advanced collection topped off by lot #11458, the unique WASHINGTON & INDEPEDENCE (sic) Copper last seen in New Netherlands famous December 1968 auction: 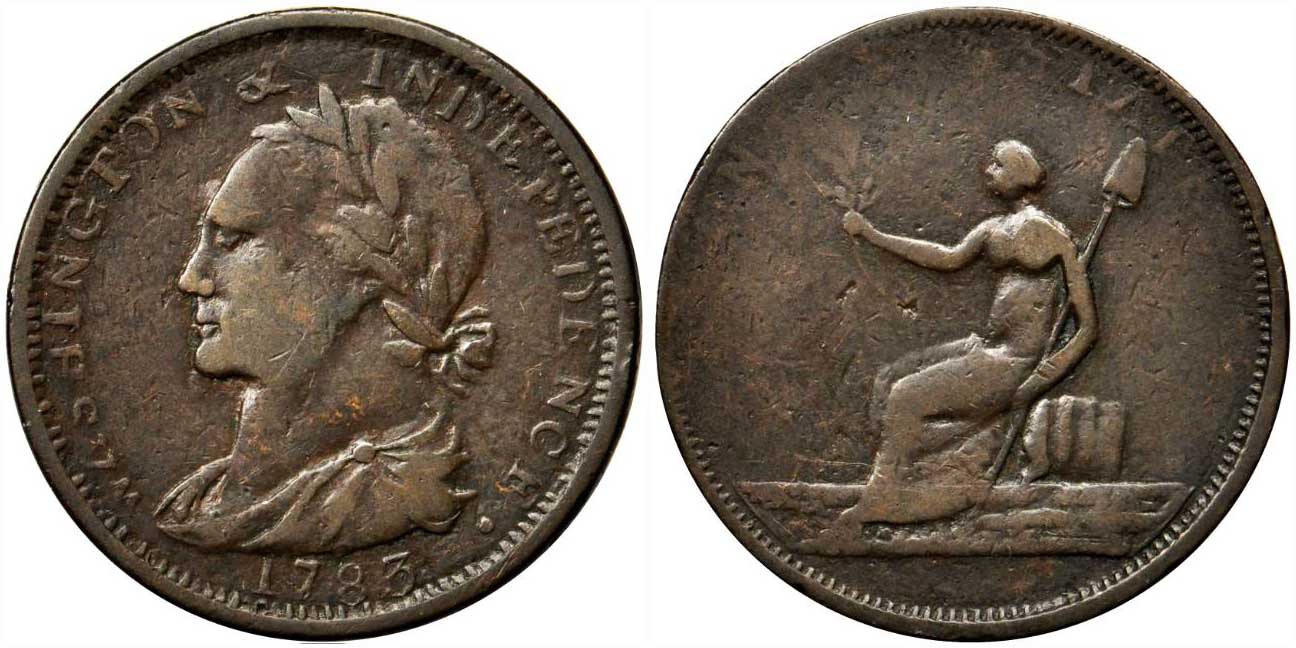 The cost of uniqueness? $28,200, which seemed reasonable to me even if this piece was well worn and not exactly beautiful.

Some of the less rare pieces, on the other hand, were magnificent, like lot #11465, the prettiest 1783 Draped Bust Restrike in Silver your author has ever seen: 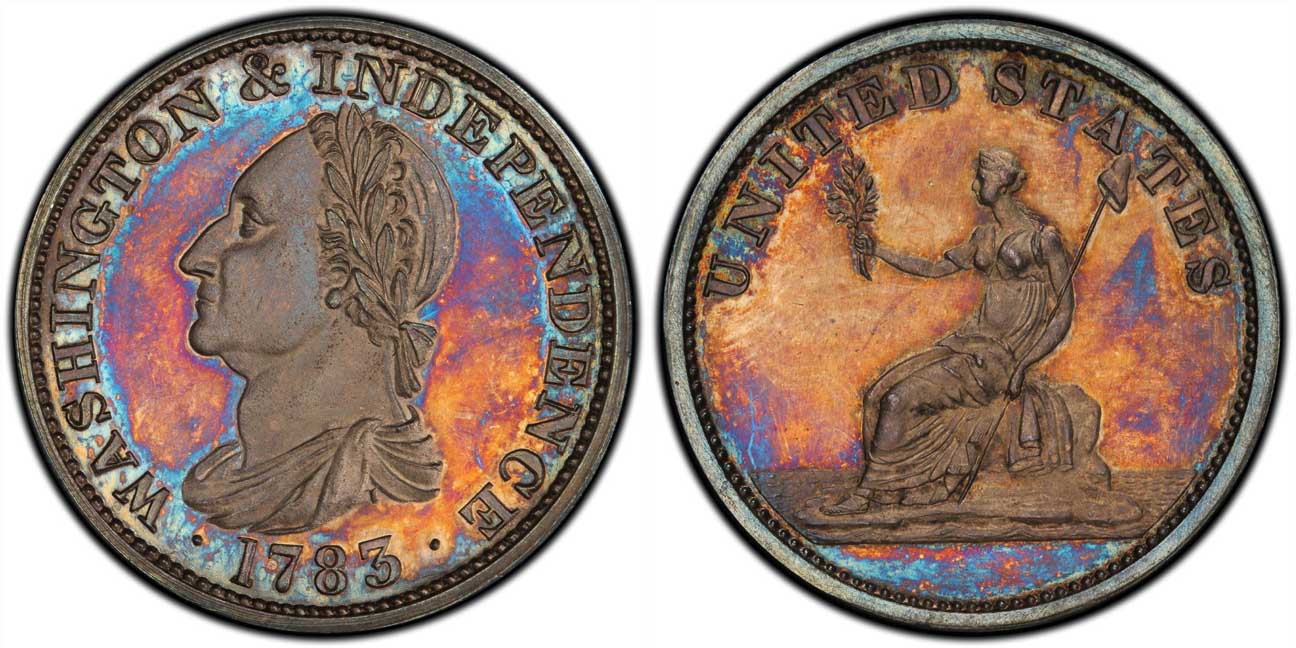 Spoiler alert: I bought it. 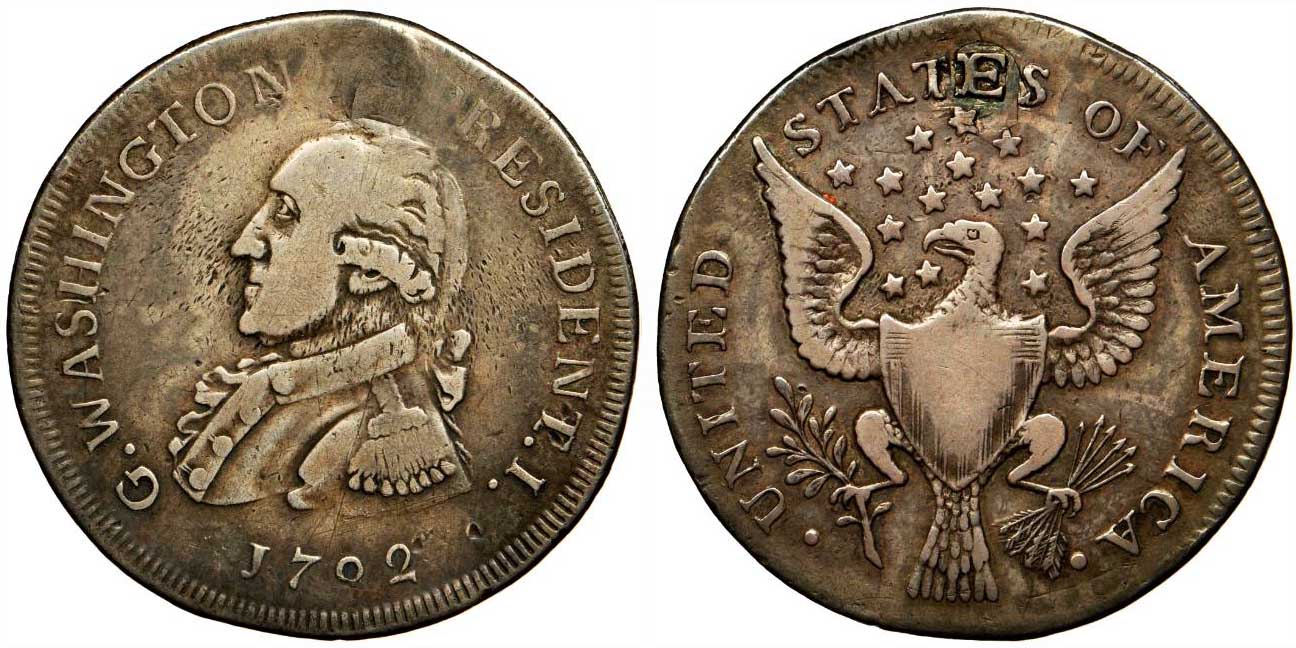 For classic rarities like that, even impaired (very, very impaired) pieces are in high demand, to the tune of $52,875.

Alas, the level of plain, old and ordinary in the Washington section was very high too, including lot #11488, a cleaned and holed 1783 Draped Bust Copper in a PCGS Genuine holder (one of a string of pieces of similar quality, or lack thereof) that sold for $29 all-in: 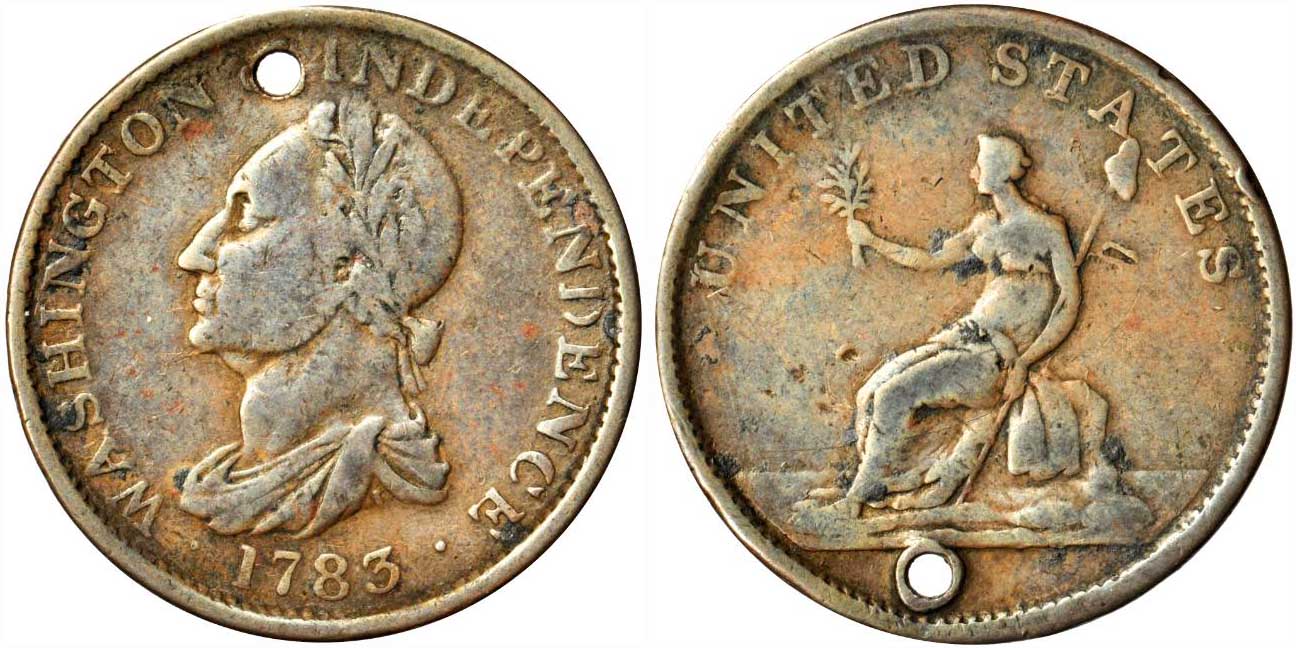 I’m thinking that coin and many of the others would have (should have) made a nice, raw, group lot, since the slabbing fees may well have exceeded the prices realized.

Then it was time for the last section of the evening (er, morning), a mostly superb offering of Fugios which contained, among other things, a neat mix of high grade common coins and choice die varieties.

The former represented by lot #11586, an extremely red example of Newman 11-X: 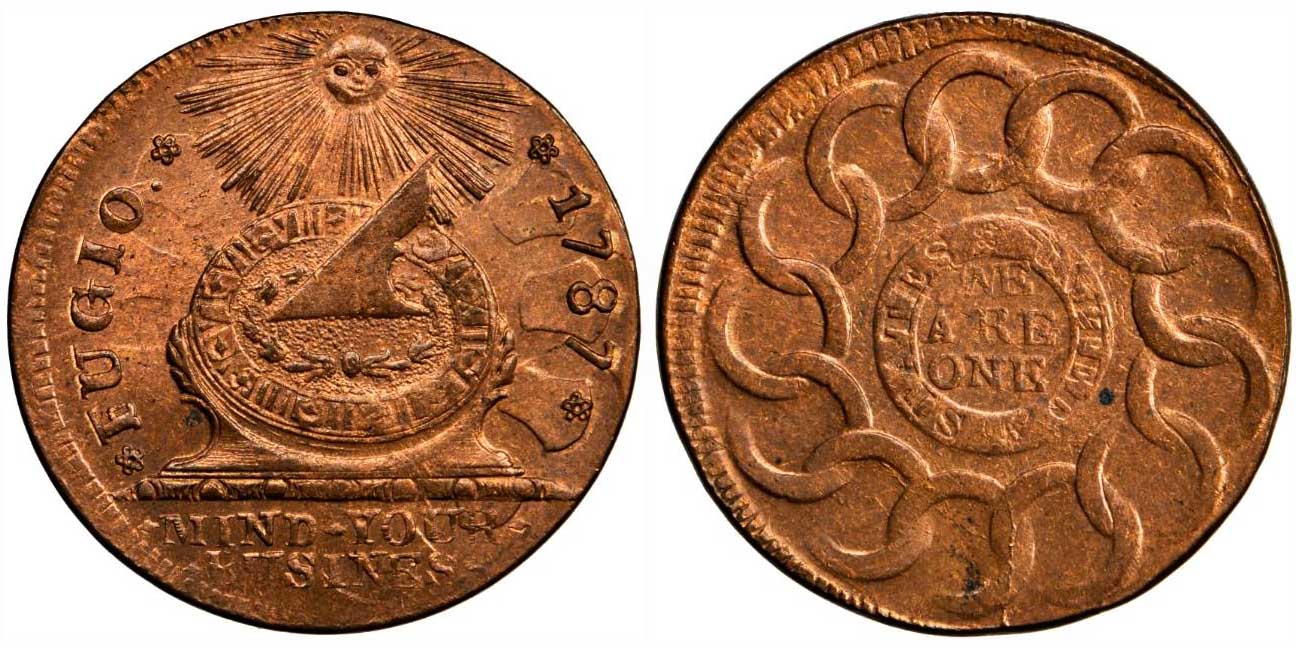 And while not everyone in the crowd was ‘buying’ that color (including PCGS, apparently, who graded it just 63 RB), enough did to carry it to $19,975 (about 5 times more than a “regular” example of this grade).

The latter represented by lot #11618, a nice Newman 19-SS in a PCGS XF45 holder which realized $9,988 to a specialist collector / dealer who did not look like he was going to stop bidding anytime soon: 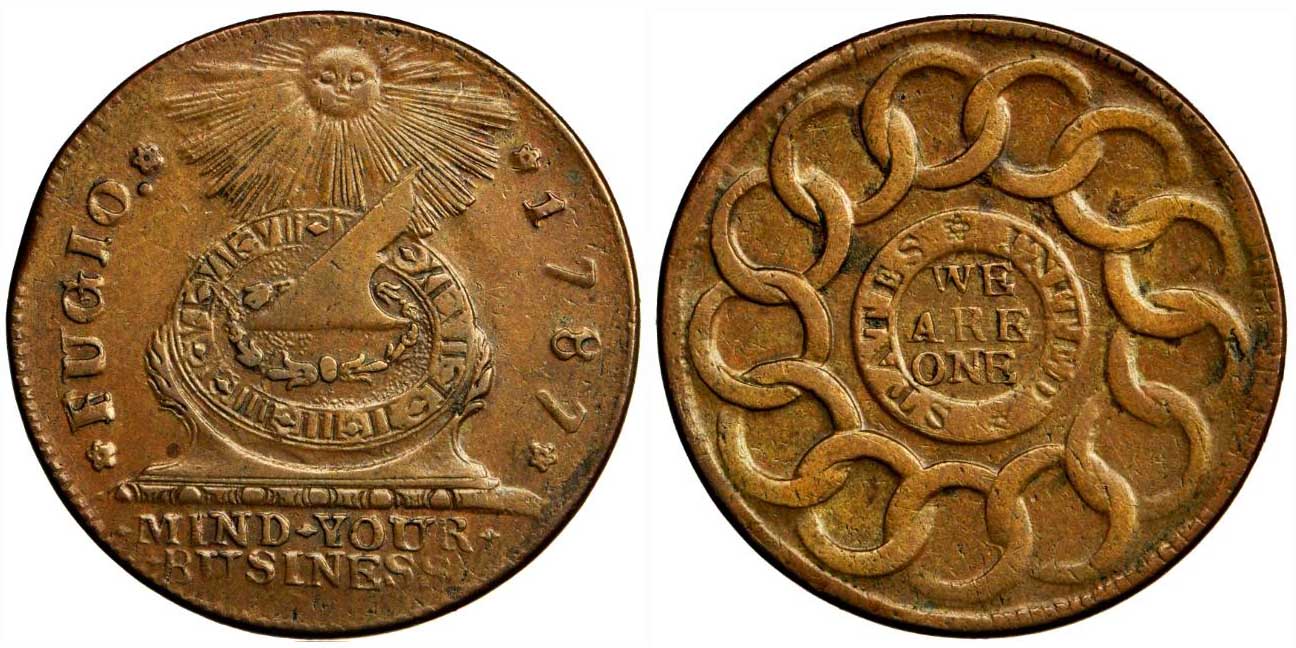 Since this was the second significant offering of Fugios in the last 2 months (with the more or less comparable Rob Retz Collection having been sold by Stack’s-Bowers in November) I wondered if the market might suffer from ‘Fugio overload’ here.   Alas, that didn’t seem to be a problem, as the nicest, choicest pieces brought strong prices throughout, though of course anything with spots or streaks or worse went wanting (as is pretty much always the case at anytime in any venue).

And then I left, returning to my hotel room and memorializing the occasion by photographing my bedside alarm clock:

And while the auctions would continue on for the rest of the week (including the unbelievably well publicized sale of a very expensive 1794 $1), I didn’t hang around, instead leaving my bids on the book and going home to catch up on my sleep.