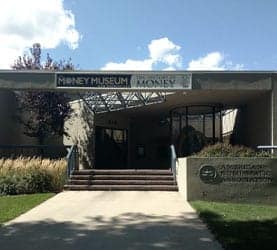 What could be better than a week of intensive numismatic activity surrounded by other numismatists in an idyllic mountain setting? Well, actually, a lot of things, but for the purposes of a numismatic-related website, I’ll say ‘nothing’.

I speak, of course, of the ANA Summer Seminar, 2006, in Colorado Springs, Colorado.

The setting itself is grand, with courses taught in the facilities of Colorado College just next door to the ANA museum (home of the Harry Bass Collection and a couple of stray Brasher Doubloons) and library, surrounded by imposing mountains including Pike’s Peak. So thats pretty cool.

Classes were offered on a slew of numismatic topics, from the esoteric (Shipwrecks), to the mainstream (Coin Grading) to the sublime (Early American Coins and Paper Money). Of course I chose the latter, taught by John Kraljevich, Director of Numismatic Research for ANR, and Erik Goldstein, Curator of ‘Mechanical Arts’ and Numismatics at the Colonial Williamsburg Foundation.

As much as I consider myself to be well versed on the subject at hand, I knew there was significantly more to learn and I was not disappointed. John and Erik put the early American series into sharp historical focus while flexing their astonishingly well-developed Trivial Pursuit muscles. They variously cited the signature of Jacob Graff on a January, 1779 issue of Colonial Currency and identified him as the man who leased Thomas Jefferson a room in Philadelphia in 1776 so he’d have a quiet place to write, illustrated and demonstrated the process by which Pine Tree Shillings were struck and how various errors and clash marks endemic to the coinage were created, and then outlined why the Washington Ugly Head is almost certainly not an issue struck during the colonial period.

And, to ensure that the class didn’t become too dry, they interspersed the detailed explanations with frequent loud raspberries to signifiy which issues really do not belong in the Redbook based on the criteria that they didn’t circulate in the colonies, or are of questionable authenticity, or weren’t actually money. Heres a hint: The Rhode Island Ship Medal is a medal. MEDAL. M-E-D-A-L. Not a coin.

Fascinating, overall, chock full of fun facts and a kick in the groin of conventional wisdom.

Aside from the classes were a variety of structured and unstructured discussions on various numismatic topics, a chance to meet lots of other collectors and dealers and, of particular interest to me, a chance to pore through the ANA library and review all kinds of wildy obscure references and old catalogs that I had never seen before.

And this is to say nothing of the sight-seeing opportunities nearby. We took the Cog Railway up the aforementioned Pike’s Peak, went to see the world’s highest bridge at Royal Gorge (an absolute must see unless you are acrophobic, in which case you should immediately go back to the ANA library) and went rafting on the Arkansas River in an ice-cold driving rainstorm. Come to think of it, that last one wasn’t that much fun.

But a great time overall and highly, highly recommended for anyone who likes coins.