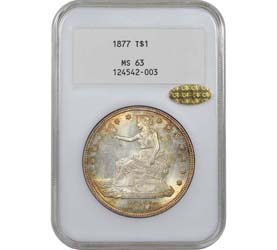 As some of you have already noticed, a number of coins in our current inventory are now identified as having CAC stickers.

And since some of you have called to ask about it, we figured it would be a good idea to make this the subject of a Coin Commentary on our website (which we are doing right now).

But before we get started, if any of our readers aren’t familiar with CAC (Certified Acceptance Corporation) and have no idea what we’re talking about, you may want to check out the official CAC website and see what they have to say first.

OK, everybody up to speed? Good.

So, our view of CAC stickered coins has been the same since the first day we saw one of those little green stickers:

If we like a coin with a sticker on it, and the price is fair, we’ll buy it.

This makes sense to us, and it’s not complicated. It’s also quite practical, since we have seen CAC coins that we liked very much, and others that we wouldn’t have purchased under any circumstances (even if they were deeply discounted, which of course they weren’t).

Now, it may surprise some of you to know that we’ve actually had other CAC stickered coins on our website in the past, we just never mentioned it. The only people who ever knew the stickers were there were the collectors who bought the coins (and even they didn’t know until they opened the box).

But these wildly different reactions didn’t surprise us at all, since we’ve heard similarly divergent views at shows, or in conversations with our clients and other collectors, and we’ve read similarly varying comments in the numismatic chatrooms. Overall, we believe the general consensus of opinions about CAC can be encapsulated in these three views:

Since we are in the service business, we wondered what we should do to best serve our customers, knowing that some hold view #1, some hold view #2 and most hold view #3. After much consternation, we finally decided to dip a toe into the water by actually mentioning which coins have stickers (imagine that!). But in so doing, there are a few other points worth noting:

The coins we list on our website are coins we believe in, coins that we want to place with good clients and coins that we will enthusiastically buy back in the future (whether they have a sticker on them or not).

We’ve seen some sellers suggest or imply that CAC coins are all PQ or upgrades. And while some might be, some are definitely not. Overall, we aren’t making any claims or promises other than to say that the coin has a CAC sticker on it.

We’ve also seen some sellers make the CAC sticker a focal point of the coin description (e.g. ‘Draped Bust CAC Quarter, 1796 Date’). That seems ridiculous to us, so we aren’t doing it. Instead, we decided to mention the fact that a coin has a sticker (if they do) at the end of our normal descriptions.

If you like CAC stickered coins, you’ll be able to find them on our site.

If you don’t like CAC stickered coins, you’ll know which coins in our inventory to avoid (or at least psychologically prepare yourself to peel the stickers off after you buy the coins).

If anyone has any specific CAC questions or comments, or would like more information about any coin on our site (or anything else), call or email – we are always happy to talk about any numismatic topic, including this one.