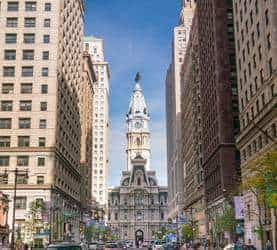 I am delighted to provide this Bonus RR about my day-trip to Philadelphia made exclusively to view Heritage auction lots, a previously unplanned, hastily arranged visit made necessary by the challenges of this year’s cumbersome ANA show and auction schedule.

How so? Well, the Heritage August Signature live auction takes place Thursday and Friday of this week, with the Stack’s pre-show auction kicking off Saturday.  And since I was not scheduled to arrive in Philly for the show in earnest until Saturday, my choices were as follows:

As you may have surmised by now, I selected Option #2.

Which explains why I was up at about 3 AM Tuesday to catch the first flight down (editor’s note: I always book the first flight no matter how inconvenient it is or how horrendous I feel at that time of day just in case there is a delay of some kind).

But this time everything went off without even a tiny hitch, allowing me to stroll into the Sheraton Hotel lobby at 7 AM, a full (and annoying) 2 hours before HA lot viewing was scheduled to begin.

So when it did, I was lot viewer numero uno, giving me free-rein of the boxes and allowing for the sort of uninterrupted, in-sequence, high-speed viewing experience I prefer.

Which allowed me to crank through the regular session, the internet session and Platinum Night, in that order, in 3 hours or so.

About which I can make the following not-very-specific observations so as not to bias anything I (or you) might be bidding on:

And then I left, but not before chatting with a few of the other dealers who had arrived after me, answering questions about the changes at Coin Rarities Online, including the one seemingly on everyone’s mind: Yes, of course the CRO hats will continue.  Was there ever a doubt?

Our next RR will be the Official CRO ANA Prologue which will be posted here in a few days. So you might want to keep an eye out for that.