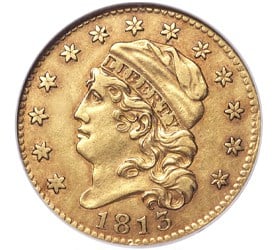 Another Original Work of Numismatic Non-Fiction by Dave Wnuck

So I’m sitting in the CRO offices one day a couple of weeks ago when the phone rings.

On the other end is a man who explains that he found us in an online search, and is looking for some information about a rare coin he has in his possession.  He went on to tell me that he is now nearing retirement age and has owned this particular coin since he found it when he was almost 5 years old.  He also said he had done some cursory research and he thought it might be worth around $75,000.

Now, while this sounded intriguing so far, we have learned to take these sorts of stories with a grain of salt, since we get a dozen emails and phone calls each week from someone who believes they have a rare and valuable (sometimes unique!) item.  Unfortunately, nearly every single one of those coins turns out to be either an extremely low grade old copper worth a buck or two, a modern replica or simply not what the caller thought it was.  Sometimes it feels like we are in the business of routinely dashing people’s dreams.

But this gentlemen was quietly persistent, and his story was quite different than most of the ones I hear.

He said he lived in Vermont when he was a young child and would sometimes help out at his uncle’s nursery business.  One day the nursery received a fresh load of topsoil, and he was helping scoop some of this soil into burlap bags when he spied something round and shiny.  He explained to me that he picked it up, examined it, and then went and washed the dirt off by holding it under a faucet.  It was a coin, about the size of a quarter, but it was gold in color, and it didn’t look like any one he had ever seen before.

He then described the details on each side to me.  Now, I like a good story as much as anybody, but I was pretty skeptical.  What he was describing is genuinely rare, and I could not recall a single incident where a similar specimen had ever been found by anyone.  But every question I asked was met with an answer that seemed to indicate that this could actually be what he said it was, and the story was sounding more and more credible.

My curiosity sufficiently piqued, I suggested we get together for an in-hand examination.

Fast forward one week and the owner and I were sitting across from one another in our local office.  We chatted for a few minutes, as he reiterated the story he had told me on the phone, though with a few more details.  And then he reached into his pocket, produced a plastic bag and carefully placed the coin on our velvet tray.

I immediately sat upright, then regained my composure and studied it carefully and for a while, attempting to evaluate its authenticity and estimate its grade and value.

As we looked at the coin, the owner said that it was an absolute miracle that he still had it in his possession.  He explained that he had carried it as a pocket piece as a child.  But those were troubled times, and the coin eventually ended up in the possession of his uncle – the one who had owned the nursery.  Some years later the nursery business failed.  And though times were very hard, and money was tight, the coin was never sold.  They almost did at one point, when someone offered to buy the coin for $185.  I winced at such a low offer until he explained that it was made in the late 1950’s or early 60’s.  I breathed a sigh of relief and said, “If it was made then, that offer was likely very fair.  This type of coin has risen substantially in value in the last few decades.”

Anyway, for some reason (and luckily for this Coin Commentary) the family didn’t take the offer.  A few years later, the gentleman asked his uncle to give him the coin back.  He said at first the uncle feigned no knowledge of the item, but eventually relented, found the coin and gave it back to its rightful owner.  From then on the coin was safely locked away.  Until recently, that is, when he made that first call to me.

We discussed value and the owner mentioned again that he thought this piece might be worth about $75,000 these days, and produced a print out of a coin of this same date and type which had realized about that amount at auction a couple of years ago.  I told him that the piece he found on the internet (a coin I happen to remember well) was among the finest known of that particular issue, and that the condition of that piece significantly contributed to the high price it sold for that day.  I took some time and explained how wear had reduced the value of his coin, but that it was still quite desirable to coin collectors.  He understood.

He said he was considering selling the coin now and asked me how much I thought it might be worth, and for my advice on how he should proceed.  I suggested that as a first step he should submit this coin for grading, as that would make valuation easier, and would give him comfort that he was receiving a fair price for his coin.

Several weeks later we received the news back from PCGS.  This coin which had been owned by this man since he was 5 years old was now identified like this:

We met again a week later.  The owner asked me about the pros and cons of selling the coin outright vs. consigning to auction, and I did my best to give him unbiased advice, including telling him that we could consign it on his behalf to a major auction, obtaining for him a better rate with the auction house than he could receive himself.

After a long discussion, he decided on an outright sale.  We shook hands and I wrote him a check on the spot.

There are likely thousands of stories like this – of rare coins lost, then found, then forgotten again.  By the time they enter collector channels, nearly all these stories are lost.  For that reason, we wanted to relate the story of one such coin, so it was not lost to the sands of time.