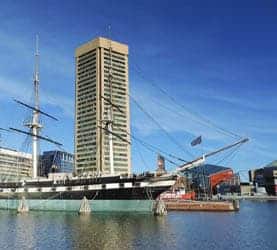 Aaaaaaaaand we’re off, to Baltimore of course, for what we expect to be a fun-filled 4 days in the Inner Harbor during which we will be looking to do our usual buying, selling, trading, grading and schmoozing from our command center at table #442.

Not that we know exactly what to expect – we never do – maybe it will be a strong selling show, maybe we’ll do some epic buying.  The latter would be especially good, since we are hoping to find enough cool new coins here to fill out our next Early Bird, which is never a sure thing, and always a challenge.  Still, we usually seem to be able to do it and frankly I would not bet against us this time.

With regular updates on our progress (and everything else that happens) posted daily right here in this spot every day this week so you won’t have to wait ’til it’s over to read about it like show reports in the olden days.

After a thoroughly eventful trip down here on Tuesday in which our flight was delayed 5 hours, the cab ride from the airport to our hotel took longer than the plane ride and part of the street near the Marriott erupted like Krakatoa (due to an it-could-have-been-worse steam pipe explosion), we were delighted to finally arrive and get down to business on Wednesday.

Starting with a quick jaunt to the PCGS early submission room where we dropped off a bunch of coins before heading over to the convention center for a deep dive into the Stack’s-Bowers auction lots.

During which we found about a dozen lots in the catalog we deemed fully CRO-worthy, then studied them every which way to figure out what to bid.

Followed by a quick lunch at the Oriole Grill at the Sheraton and a last perusal of the catalog to make sure we didn’t miss anything, a process which revealed 2 more bidding possibilities.  So we headed back to lot viewing to see those, eliminated one and added the other to our let’s-try-very-hard-to-buy-these list.

And then popped into one of the wholesale rooms where we peered through at least 30 boxes of coins to extract 3 cool ones, then headed back into the hallway to wait for a couple of other dealers scheduled to show us their wares.

Resulting in another couple of cool NEWPs to add to our still modest but growing assemblage.

Bringing us right up until 4 PM and the start of the Stack’s-Bowers Session 1, which we eye-balled for a bit, but decided to go back to the hotel since our first lots of interest wouldn’t come up for a couple of hours.

At which time we’d be in an Uber on the way to Columbia, MD to have dinner with friends, meaning we’d be bidding using the excellent SB app which I’d highly recommend if you haven’t used it yet.  Of course, even an app which works perfectly isn’t going to help when some other bidder (possibly also using the app from a different Uber) is willing to pay a lot more than you are.

A sad outcome we experienced again between servings of tabouleh and chicken meatballs.

Finally returning to the hotel real late so we could turn in and be sufficiently rested to tackle what figures to be a looooong and tiring Thursday starting with dealer set up at 8 AM, a full day on the bourse floor and the Stack’s-Bowers auction, session 2, right after.

The results of all of which will be described right here in just about 24 hours from now.

It’s always an e-a-r-l-y start for dealers on Thursday in Baltimore, as the show opens for set-up at 8, we need to get our coins from security before that, so breakfast has to be done by 7:30, meaning we need to get the restaurant at 7, which means getting in the shower at 6:30, writing the blog at 6, hitting at the gym at 5 and thus setting the alarm for 4:30 so we can wake up well before that anyway.

So by the time we were at the show and setting up our booth #442, it had already been a pretty long day.

And of course things were just getting started.

With some good sales right off the bat in US coins ranging from a few hundred to $25,000 and continuing intermittently during the day.

All made possible because 50% of team CRO (i.e. my wife MaryAnn) is here to manage the table, thus allowing your author to run around the floor like crazy looking for cool NEWPs.

Ideally these would all have been cool coins ready to go straight to the list. And while there were some things in that category, most weren’t:

Phew. I would say that’s a pretty good haul, and if that’s all we were to buy here it would be enough to keep us busy for a while after the show.

But of course we’re not nearly done in Baltimore, with 2 days to go, many more booths to visit, some interesting coins still to come in the auction and the potential for all sorts of cool coins to walk right in the door.

A thought that made us hungry enough to head to The Helmand Restaurant with some world dealer friends on Thursday night and sample a wide variety of unidentifiable but delicious small dishes.

Before heading back to the hotel at 10:30 in still steamy weather and turning in so we will be sufficiently rested and ready for whatever Friday may bring.

It is what you make it.

Is what we were thinking after hearing a variety of negative comments from a number of other dealers on Friday here at the show:

“I usually have 10-15 local retail customers visit the table at this show, so far I’ve had two.”

And our personal favorite:

“I can’t wait to see what you are going to write about this show!”

Good news last dealer commenter – your wait is over!  What we are going to write is that this has been one of the most lightly attended Baltimore shows we can recall, with many of our own regular customers seemingly sitting this one out, and a number of the usual dealer suspects either absent or having popped in only for a short time.

Why? From our perspective there are a variety of reasons:

But – and you may have heard this before – it is what you make it.

Which for us was another pretty decent day buying the things we liked at whatever the current levels are – which despite the attendance (or maybe because of it) were mostly pretty strong. It seems like everyone was focused on the same limited supply of coolest coins here, which of course are exactly the ones we are always trying to buy.

And meeting with the collectors who are here and selling them some neat coins, including some nice U.S. type in the morning, a lovely Pine Tree Shilling in the middle of the day and culminating with a wild Wildman late about which we had some mixed feelings (because my wife had told me literally minutes earlier that it was her favorite coin in the case). Sorry honey.

Before heading up to the auction at 5 PM where we tried to buy a few coins for inventory and for clients and were frankly shocked to be outbid on all of them (since we had some very aggressive numbers in mind).

So we headed out for dinner empty-handed with a dealer friend, returning just in time to track our last two lots from the hotel room.

The first of which was a highfalutin gold coin we originally loved and were going to chase to high heaven, until we viewed it a second time and concluded it was actually a fantastic recoloring job. So we watched that one sell strong to someone else.

Leaving just one last lot on which we were not going to be denied, and weren’t.

Ending the day on a positive note and having us thinking of a Saturday during which maybe we will see some of the local guys who have not come in yet.

But if they do, or even if they don’t, we will do our best to make the most of whatever opportunities we have.

We got an even earlier start than planned on Saturday, as the commotion in the next room easily blasted through the paper thin hotel room walls allowing us to clearly hear 1) A guy snoring like Bullwinkle, and 2) Another guy yelling at that guy to cut it out.  Which as hotel disturbances go was actually pretty tame in my experience.  And if either of these two gentlemen are reading this blog (which is in theory possible), perhaps I could recommend that you stay at the Monaco next time – I think you’d really enjoy it over there.

Anyway, once we were up, we were up, so we wrote Friday’s blog, had a leisurely breakfast, slowly packed up and eventually checked out of the hotel, arriving at the show just before 9 with pretty modest expectations born of the light show traffic here on Friday.

And though there was some activity on the floor during the day, and a few more of our local regulars made an appearance, it never actually got busy (or at least not busy enough to convince my wife that I work really, really hard at these shows).

Still, we sold a few more coins, bought another couple and picked up our S-B auction lots in and around some non-intensive coin schmoozing, tire kicking, bourse scouring and take-home grade submitting.

All of which we were done with at about 1 PM, at which time we decided to start packing up and only then realized that we had somehow netted (as measured by the number of blue boxes we had) 90 (ninety!) more coins than when we started.

In fairness, some of those were previously raw coins graded at the show, but the great majority were new items acquired here.  Which frankly is more than I remembered, but sometimes in the heat of the coin-buying moment you lose track.

So we’ll have plenty of ammo for the next EB, which if all goes according to our photography plan will be this Tuesday. We’ll make the go / no go decision on that on Sunday night and post the schedule, as always, on our home page.

We’ll also have plenty of other grading and CAC packages to go out, so whatever happens it figures to be an extreeeemely busy week.

But the first order of business will be our local Deven’s, MA show on Sunday, so we’ll hope to get home from Baltimore without too much delay so we can be up and out bright and early for that.

And then write another RR about that show right after.

So you might want to keep an eye out for all that.