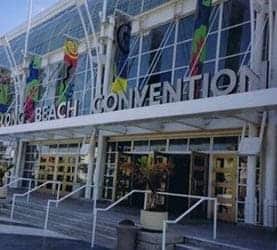 Having arrived in Southern California late on Tuesday evening, your author hit the ground running on Wednesday. By which I mean walking slowly to the convention center at 8 AM schlepping a heavy bag of show supplies to retrieve coins from security so I could submit them to PCGS bright and early.

Too early, it turned out, since I soon learned that they did not open until 9. Hmmm. Oh well, more time to go view Heritage auction lots at the room down the hall.

Except that that also did not open until 9. So there I was, ready for action (and auction), but with nothing much to do, so I joined the queue of people in the convention center lobby doing wholesale business poring through box after box of coins.

And while that was indeed an activity, and did keep me busy for a while, I did not actually find anything I wanted to buy.

So by 9 I was ready to move on, but by then I figured there was no point in starting to submit coins or view lots, since I needed to be at a hotel up the street at 9:30 to view a bunch of coins being offered.

And while that came off as scheduled, I found less there to buy than I had hoped before returning to the convention center to start all over again at about 10:30.

First re-order of business: Get the coins from security again, head to PCGS, fill out 143 grading forms so fast that I developed a severe hand cramp.

Then go to Heritage and view as much as possible before meeting a customer at a different hotel at 11.

Make a quick and totally expected (since this had been planned for weeks) sale there.

Then return to the convention center for a quick lunch before the show would open to dealers at noon.

At which time the real fun would begin, as I set up the new CRO booth as quickly as possible, though it did take longer than in past events because we now have a deluxe corner with 4 cases instead of 3. Which means we can neatly devote one to each of our four categories.

And do so in our new spot as close to the door as is humanly possible (unless we were Heritage, which we are not).

After which I tried to buy and/or sell as many coins as possible during the next 6 hours, which turned out to be more of the latter than the former, including an incredible Pillar Dollar that had surfaced at a local show about a week ago and about which I had received a call from a dealer friend about 11 seconds later. So I was very happy to see that in hand and finally finalize that deal here.

I also bought a couple of other interesting type coins and a few tokens in a room where, frustratingly, many of the other dealers were not set up yet or were very slowly working on it.

Which in a silver lining sort of way allowed us more time at the table to make a few sales to the limited number of dealers and collectors in the room who were actively looking to buy.

All of which was disrupted (in a good way) by happy hour, where they roll out the Mexican food and beer and where someone focused on numismatics could easily be trampled by a mad rush of people all trying to be first in line to score a taquito.

So I should be rested and ready for what figures to be a very busy Thursday in which I will need to scour the bourse early looking for NEWPs, see many local collectors at the table, bid in the various Heritage sessions during the day and generally try to do several things at once for 12 consecutive hours.

The results of which will be posted here bright and early (west coast time) on Friday AM.

Aaaah yes, Thursday at the Long Beach show, and like most days on the numismatic circuit, this one was filled with the highest of highlights, and unfortunately also some numismatic l-o-w-s:

High: I burst out of bed bright and early and headed straight to the Hyatt gym.
Low: It was packed in there, with about 15 people sharing 8 pieces of equipment in a tiny, poorly ventilated room so hot that the windows fogged up.

High: Our new corner table location is the boss, leading to a dramatic increase in traffic, especially of the people who just happened to be walking by, saw something cool in the cases and stopped to take a closer look.
Low: One of those guys told me I looked like Bill Clinton. I’m polite, so I did not respond by telling him that he looked like Bea Arthur (which he did).

High: We found some very cool coins scattered about the bourse floor which would be perfect for the CRO site.
Low: Many were priced to the moon, in some cases a moon orbiting a distant planet.

High: We saw a totally cool and extremely rare colonial which was cherry-picked for a song by another dealer from a group lot of tokens in the Goldberg sale earlier this week.
Low #1: It wasn’t us.
Low #2: I think he sold it already.

High: We saw some more fantastic Pogue highlights from the next session on display at the Stack’s-Bowers table.
Low: Several customers told us they will not be buying anything from us until they see what is included in that sale, and determine what they will be chasing there.

High: There were a few really neat coins in the HA auction sessions that we really wanted.
Low: We got swamped on 3 out 4 of them.

High: I sold a brand new, super-deluxe world crown to a good customer.
Low: That one would have been awesome on the next Early Bird.

High: The first few grading submissions came back extremely fast and right where we hoped/expected.
Low: The last one was a shot to the solar plexus, with a coin I bought raw as unc. coming back AU55. Oh well.

High: Had a nice dinner down by the water with some dealer friends.
Low: The second round of hot sake was not delivered until dessert, which is not a combination I can recommend.

And now we are on to Friday, where we hope to have more of the Highs, less of the Lows, and better coordinated delivery of our restaurant orders.

Things ramped up nicely at the show on Friday with even more traffic at the table, a dramatic uptick in sales and a veritable onslaught of cool NEWPs in the U.S. and world categories with a dash of esoterica thrown in.

But let’s get specific:

We’ve had more traffic at the table than I can recall at any recent Long Beach show, much of it of the random ‘walk-up’ nature where people not specifically looking for us see something of interest in the case as they cruise by and stop to take a closer look.

With a number of those resulting in unexpected (both from the standpoint of the buyer and us) sales of the coins displayed on that side of the table. Which immediately had your author re-thinking which coins should best be positioned in this maximum visibility spot to ensure that this happens even more often. Hey, it is a business afterall.

And business was booming, with a couple of XL transactions mixed in to turn what had been a pretty good show into an e-x-c-e-l-l-e-n-t one.

But really it was the buying I was most enthusiastic about, as I found a surprising number of very cool coins on the floor on Friday, and was offered others that had not been on display, including some rare early copper, a slew of beautifully toned seated coins and a few of the eye appealing less expensive pieces that never last very long on the site.

The last of which was added at about 5:30 in the afternoon and will slot neatly into what should be an especially robust Early Bird this Tuesday.

And that doesn’t include any coins we buy Saturday, of which I am hopeful/confident there will be at least one more big one I have been pondering since Friday AM.

Beyond that, I’m not sure what to expect here, but the way things have been going it would not surprise me at all if we had another great day with coins coming and going at a rapid rate.

And if they do, or even if they don’t, we will write all about it in our next RR penned from the comfort of home on Sunday AM.

After the aforementioned high-powered sales action earlier in the week, I was hoping for more of the same on Saturday, but that never materialized with just a couple of transactions during the day.

Fortunately I did better buying, but rather than focus on the cool stuff I bought, I thought it might be more interesting to talk about the coins I didn’t.

And by that I of course am not referring to the thousands of regular old coins in dealer cases that I never even looked at, but rather the few really cool pieces I very seriously considered (agonized over, actually) but did not end up getting.

Such as a wildly toned, old holdered, gold stickered Morgan which would have looked fantastic on the list. Alas I never can quite figure out how to value these, or distinguish the few hundred dollar version from the ones some guy buys in an auction for 10 (or 20) times that much. Which is why I generally only handle the ones with prices low enough to make sense to me.

Or a similarly fantastic looking toned Walking Liberty Half Dollar, a coin I’d have liked even under normal circumstances, but even more so given the fact that the last one we had (the coin featured in our ‘Tangerine Dream’ ad) has up to today been ordered by at least 15 different people. But this one was a better date in an altogether different price tier, rendering that prior experience either irrelevant (I thought) or possibly even totally misleading (I also thought) and reducing my confidence that it would “work”.

With the last being a super-fantastic Capped Bust Half in an ancient slab with even more wild color. Which was of course priced at a level where it would have had to upgrade (possible) at least once (I can’t rule out twice) or gold sticker (also possible, of course) to really make sense. But that seemed a lot of risk to take for what was likely to be a modest upside. At least that was my thinking in the moment and a half I had to decide.  So I passed.

So that was 3 coins I could have bought, maybe should have bought, but didn’t, though I can’t rule out tracking down one, two or all next week after I’ve pondered it further, knowing they might all be gone by then.

Fortunately, I did pull the trigger on plenty of other cool coins which will be unleashed in a torrent (or possibly a torrent and a half) during our Early Bird on Tuesday at noon.

Though if I have any hope of finishing that on time, I’ll need to stop typing this, and start working on that right now.