Hey, after a long hiatus, let’s do one of our patented BTN articles starting right now:

Just one:  Shows attended this month, another installment of the New Hampshire Expo.  Notably (or monotonously, depending on your perspective), this was the 6th consecutive show we have attended in NH based on the Covid cancellations of other events around the country that would have been on our schedule.  But that will be changing soon!

More than 2 Dozen:  NEWPS acquired there.

All But One:  Number of the above that were slabbed.

1652:  Date of the oldest coin in that group – a piece of Massachusetts Silver.

Just 15.6 Miles:  Distance away from our office that coin was minted back then.  This is true – the John Hull mint was located on the site of what is now a Macy’s department store in downtown Boston as indicated by this plaque on the side of the building: 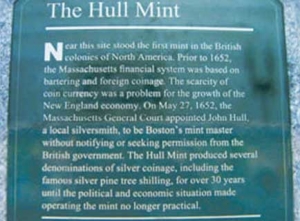 How cool is that?  Very.

Not even 5 minutes:  Hours of sleep I got the night before it went out, which I promise you was not the plan.

51, of course:  Coins on it.  As has been the case and specifically noted in the header of every single Early Bird we have launched for y-e-a-r-s now.  I mention this because a good, long-time customer actually said to me that he liked this list, but there were “fewer coins on it than usual.”  Um, no.

55%:  Coins in total sold off that list in the first 48 hours, which is about average for a CRO EB.

Five Guys:  Number of people who all ordered the most popular item on it.

Also Five Guys:  Name of the restaurant where a local customer asked me to meet him to pick up a cool token he offered us.

One big one and two small ones:  Appraisals we did this month.

Nada:  Cool coins among them that would have been a good fit for the website.

29:  Coins we bought in auctions (but mostly not the same auctions).

Eleven:  Coins we bought from people who called or emailed us with something cool to sell this month.  That’s actually less than usual.

More Than 3 Full PCGS Boxes Full:  Quantity of NEWPS we have lined up for our next EB.  So we’ll narrow that down to the final 51 that seem to fit best and save the remainder for next time.

At Least 6 Hours:  Amount of sleep I’d really like to get the night before it goes out.

The 13th Day of July:  Date we are planning for that next one.  So you might want to keep an eye out for that –