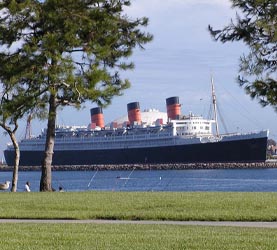 Good morning Road Report reader and welcome to this our 1st installment from the year’s 2nd Long Beach Expo.

And so far it’s been just great, in that none of the other passengers on my flight went berserk like I sometimes see on the news, we landed on time, and I was successfully reunited with my luggage just an hour later (which is in my experience an extremely successful result around here).

A restful sleep later, and I am now up and preparing for what figures to be a productive and loooong Wednesday which will begin with lot viewing, followed by dealer set-up, what I anticipate to be frantic buying and selling, then coin grading, followed by the Heritage auction Session 1, after which we’ll be off to an extremely civilized numismatic get-together during which no one will drink too much.

All of which will be described right here on Thursday AM with our usual LB disclaimer that, given the time difference, updates may not be posted until late morning east coast time (so please do not email me in a panic if you do not see it the instant you wake up).

Fans of multi-tasking will surely appreciate my Wednesday morning, since it began with me eating breakfast while figuring and entering my bids for the Goldberg world session kicking off at 10 AM and at the same time making sure every coin in the CRO inventory had a price sticker and inventory number on the back.

A large-scale project which came off with no errant bids, incorrect stickers or spilled-coffee-catastrophes.

After which I got my dealer badge in the new and waaaay more efficient set-up in the convention center lobby (as opposed to every past year where you had to schlepp through the not-yet-open bourse floor and get your badge near the loading dock). One of a number of recent changes here that have all been A-1 in my book.

At which time I also noticed that the amount of informal, impromptu dealer-to-dealer wholesale activity taking place in the lobby seems to have increased wildly at this event, including one guy who must have had ten double row boxes piled up in front of him which another dealer was rifling through at high speed.

But I was not a participant in any of that, instead using my available hour or so before the show started to do some concentrated lot viewing at Heritage while finalizing a sale with another dealer.

And then heading down to the bourse floor and setting up our primo booth #614, complete with luxurious carpeting and plenty of space to display the entire CRO traveling inventory and store all of the other coins destined for grading / auction / wholesale / etc.

While at the same time doing some meaningful business of a retail and wholesale nature, selling 2 really nice world gold coins to 2 different buyers, the heady Oregon 50c featured in this weeks ad, a group-let of Canadian coins and some assorted other choice things on a day that was considerably better than one might have expected / predicted.

Especially considering that many of the dealers here were late in arriving, seemingly following the 2 PM start of past years and not the noon opening instituted a couple of shows ago (either that or their flights were all late – not sure which).

And whenever I had a spare few minutes, I filled out a grading submission form and then zipped them over to PCGS 1 or 2 at a time as I looked for cool coins to buy on the way.

And while I did find some nice federal and world coins on the floor from a variety of sources, I will need to do much more of that during the rest of the week on the bourse or in the auctions.

Such as at Goldberg, where I checked to see that I had in fact won all of the lots I bid on earlier in the day.

And then I looked up just in time to see that Heritage was already projecting the progress of Session 1 on the wall near their table which indicated several things to me:

And it was great fun, culminating with several members of our party frolicking on the beach (totally professionally, of course) in a scene that looked very much like this: 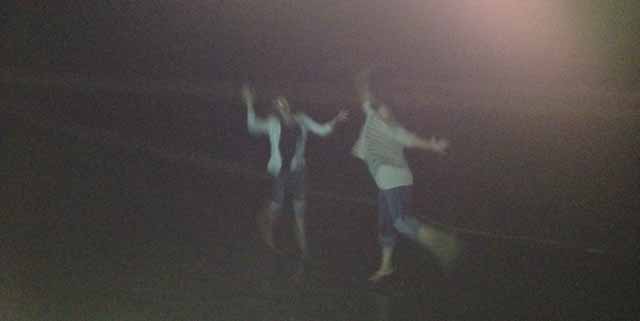 And then we headed back to the hotel to get some rest for what figures to be an even busier Thursday during which the public will be making their first appearance at this show, and where I expect that even more multi-tasking will be necessary.

First order of business on Thursday: Wake up at 3:17 AM with a giant headache, take 3 Advil, go back to bed.

And then wake up again at 8:45, hurriedly write yesterday’s blog, get ready and then race over to the show arriving at the incredibly late hour (for me) of 9:50.

And when I got there, it was sufficiently busy that I thought for a moment that the public had already entered the room.

Alas, and thankfully, that was not the case, and I still had 10 minutes to get my act together.

Which I did just in time to start selling coins to collectors at the table. Including a lot of things of the “has-already-been-on-the-site”, as well as the “brand-new-no-one-has-ever-seen-it-before” varieties.

And in a good mix of categories, including federal, world and colonial coins in approximately equal quantities (just like we drew this thing up), but almost entirely at higher price points of $2,850+ (which I did not see coming).

In fact, the only sale of the day at less than that number was a neat type coin that had been on the list for a while, but which suddenly was in great demand from two collectors. The first of which came and studied it for a solid 10 minutes before saying he was going to lunch and would be back, followed by a second person who did the exact same thing before saying he’d consider it, after which the first person came back and bought it, followed just a few minutes later by the second guy who walked up, casually peered into the case and seemed in a panic when he realized the spot where that coin formerly resided was now empty. About which we can draw the following conclusions:

Also interesting was that some of my grading results came back faster than usual / expected, including some high end colonials and new world coins which will be on Tuesday’s list.

Augmented by some of the things I found on the floor, which so far has been a pretty respectable haul which I fully expect to grow on Friday.

And then, exactly like yesterday, I looked up and saw that the Heritage evening auction session was already being projected onto the wall, starting with some colonials in what HA was called the “Premier Session” (sort of a Platinum Night Light, if you will).

And while I thought that might confuse some buyers (since other colonials had already been sold yesterday in a different session), the strong results suggested I was wrong. Dead wrong.

After which we packed up and headed out to the waterfront with some dealer friends for Sushi at Tokyo Wako during which much silliness ensued, and a coin dealer whose name I will not mention (Dave Wnuck) unsuccessfully tried to put an extra Unagi on my plate since he was on another one of his famous diets.

Then I went back to the hotel and tuned in early, since I have had a pretty bad cold since the moment I landed here in California, and standing all day in a chilly convention center is not exactly helping.

But I am optimistic that I will feel better on Friday, and that business will continue to sail along at a show that, so far, has been downright excellent.

Friday turned out to be another fine day here in Southern California, with a steady stream of collector and dealer buyers visiting the table, some good grading results trickling in and, I am pleased to report, some cool new purchases snagged from all corners of the room.

Speaking of which, I am most proud of the coin I spotted upside down in the back of another dealer’s case, couldn’t view because the owner wasn’t there and his tablemate didn’t have the key (something which happens with some frequency), finally did get to look at during a subsequent visit but was told it wasn’t for sale (ditto), and then re-visited the table 11 times until he finally sold it to me if for no other reason than to get me to stop pestering him (one of the few times I have been able to do that).  Hey, sometimes that’s what it takes to get cool coins, and I am not above begging for the right item.

I also bought things in the more conventional way (i.e. bid in an auction, or saw a coin on the floor, asked for the price and then wrote a check with no begging at all), as well as adding some neat NEWPs that people brought specifically to offer me.

The grand total of which is, so far, a nice haul of colonial, federal and world coins that will be coming soon to an Early Bird near you.

I did not, however, buy everything cool I saw, including this admittedly interesting 3-D ‘pop-out’ item of a type I have seen before, but never on a $20 Lib: 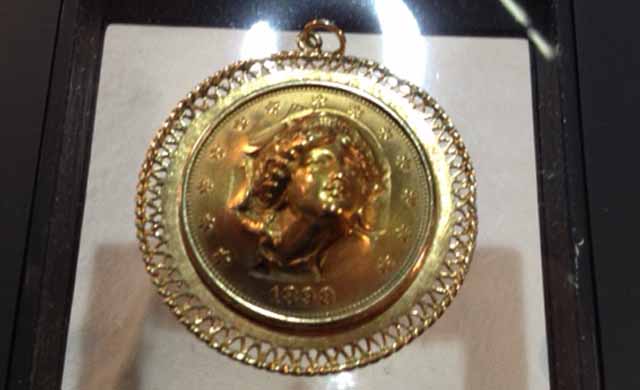 Just wasn’t sure what to pay for that one.

Which leaves the last order of business here in LB to pick up the remaining grading results (I hope) and make a few more sales and acquisitions before leaving town at about midday Saturday.

Whatever happens, it will be reported in our final show recap posted here on Sunday AM.

Now back home and having had a good night’s sleep for the first time since last Monday, I am pleased to recap the Long Beach show as follows:

But next time I come here I am arriving earlier in the week, and I am staying later since there was more than enough business here to justify it.

And now it is time to start work on Tuesday’s EB which will be a tour de force IF I can get all the images together in time, which I am going to try very hard to do.