And, as always, we are excited to be here and ready for action, beginning just minutes from now when we will drop off some grading at the PCGS pre-show room and then hit lot viewing for the Heritage auction before rolling into the show itself starting at noon local time.

Where we plan to buy and sell cool coins, see dealer friends, schmooze with local collectors, hobknob with industry bigwigs and generally soak in everything we like so much about coin shows that we’d be here anyway even if we did not do this for a living.

And then write all about all of it right here in this space each and every morning of the show noting, as always, that we are on Pacific time here and said RRs may be up later than usual for you east coasters.

Continuing on from yesterday’s RR, we efficiently filled out and dropped off about 10 grading packages, blasted through every last HA auction lot and still had time to hit the wholesale rooms and buy a couple of coins before joining the queue poised at the bourse room door at 11:57 AM.

And then burst in precisely at noon when dealer set up statrted, landed at our deluxe table #612 and got set up as quickly as possible.

So that we could then hit the floor running where, as it turned out, we were not a moment too soon, instantly snagging a superb world coin at an unexpected table just as 4 other dealers descended upon it and lamented that your author “bought the best one”. To which I can say two things:  1) Yes, that’s true, and 2) Hey, the early bird gets the worm and all that.

Finding a few other interesting coins around the floor, but in general less than we wanted / needed in a room in which many of the dealers had not yet arrived or were slow to set up. Which of course necessitated the kind of inefficient searching we are used to, with multiple visits to the same tables to see what had been put out during the course of the afternoon, finding two other coins on our 2nd and 4th visits to those dealers respectively. Meaning that sometimes the early bird doesn’t get the worm, the persistent bird does.

Returning to the table frequently to show coins, buy coins from show visitors and talk collecting direction with a couple of others.

Before hitting the floor again to try to add to our NEWPs box, which on this foray was a cool 2¢ Piece.

Which would turn out to be the last transaction of the day coming or going, right before we packed up and headed out to dinner with a couple of dealer friends.

Getting back to the room about 10:30 PM and collapsing almost immediately in anticipation of what will be a loooong and busy Friday starting on the bourse floor and continuing on with HA auctions during and after.

The results of which will be posted right here tomorrow.

When the first customer to arrive at your table in the morning announces that he is looking for a particular Ecaudorian coin, you actually have exactly what he is describing, he loves the piece and the price, buys it with enthusiasm and walks away smiling, it is generally considered a harbinger of a successful day on the bourse floor.

And it certainly was on what turned out to be an extremely active Thursday that even the most optimistic numismatist could not have seen coming.

But there we were, busy all day, almost inundated at times, selling coins of all kinds, including some we just purchased and did not really plan to offer here.  Like some of the colonials from last Sunday’s Goldberg auction, and this lovely Central American Republic 4 Escudo just acquired here on Wednesday: 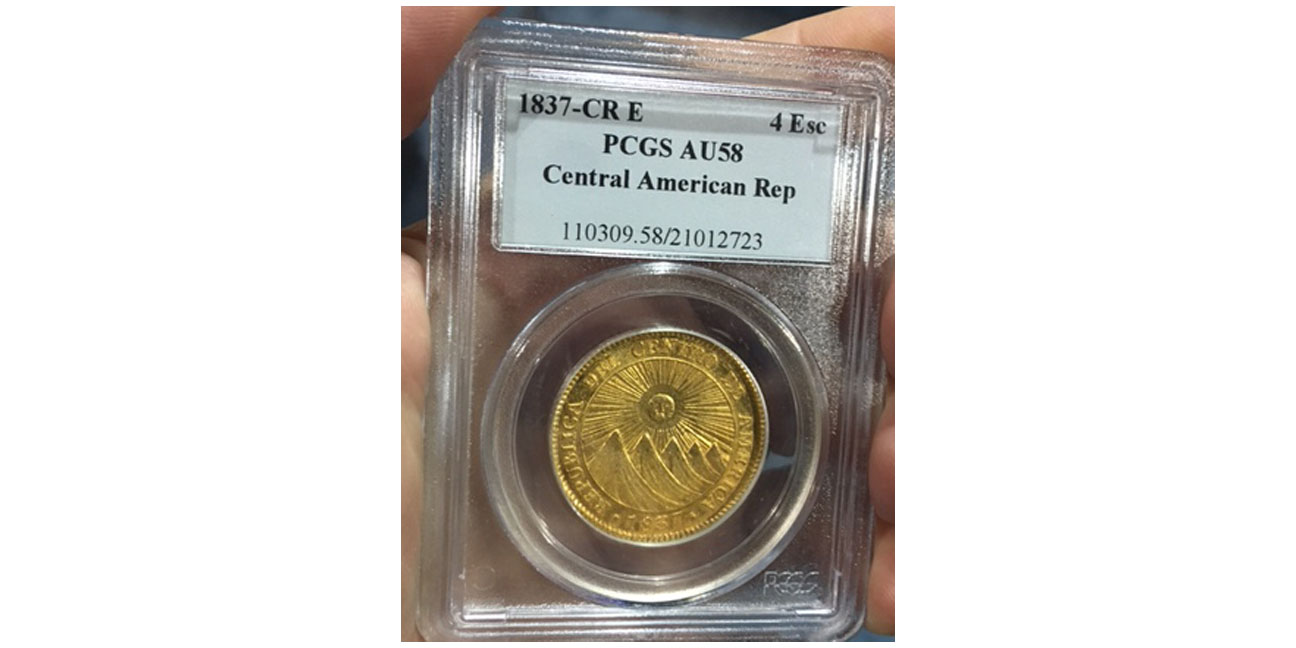 But also including coins we thought were just as nice but which had been on the site, in all categories, from a few hundred dollars to the mid 5-figures, colonial, U.S. and world, copper, silver and gold, just after breakfast, during lunch and right before dinner, to long time customers and new friends we just met on Thursday, by cash, check, credit card and trade-in and, in general, representing the full gamut of the CRO business.

The downside of this (and there are several) is that I was too busy to pay attention to a few other things and missed some good opportunities:

But of course those things are outweighed by strong business at the table, so we aren’t complaining, we wouldn’t trade any of it and we’d be delighted to do it all again on Friday.

Which is possible, since I know several other long-time local customers will be coming to the show during the day and bringing with them the potential for something big to happen.  And if it does, it will be discussed right here in this space 24 hours from now.

After our well-documented wiiiiild ride yesterday, we weren’t really sure what to expect on Friday.

Fortunately, it didn’t take very long to find out, as a customer who set aside several coins Thursday came in, re-eyeballed those and then added another cool one to the stack. “Hmmm, that’s another positive start” I said to myself.

Followed by a couple of other medium sized transactions and then, in the late morning, another big multi-coin deal that left your author’s head spinning (in a good way).

But not so much that I couldn’t make my usual quick tours around the bourse floor looking for interesting coins when I had a spare moment or two.

During which I found a neat toned commem here, a nice AU Pillar Dollar there, a wild raw colonial at the table of a local dealer and then a wicked haul of state coppers I have been chasing for a while.

Still, despite my best efforts to look through most every case and dealer box in every corner of the room (and it is a biiiiig room), I wasn’t finding as many CRO-style U.S. coins as I had hoped.

How come? Obviously really choice, eye appealing U.S. coins are hard to find. And we certainly passed on many that we didn’t think were quite good enough.

Does it matter? We think so. Ideally we’d like to have a very balanced offering in all of our inventory categories.

Is that possible? In a macro sense, of course, though there are certainly times when we’ll be heavier in one area than another based on what we find. Or don’t find.

But not knowing what will appear at any particular show or in any particular week is part of the fun. And of course it helps that with our diverse inventory offering we can sort of go with the flow and buy only the things we really like.

Keeping in mind that there is still one day to go here, we never know what might walk in the door, and if something great appears we will numismatically jump all over it.

And then write about it in our last LB RR to be posted from the comfort of home on Sunday AM.

Of all coin dealering activities, I’d have to say my least favorite is the schlepping.

Especially on Saturday’s at LB, when we pack up in the morning, get our large, heavy bags wedged in the fast-closing hotel room door, drag them down the mile-long corridor, fight them into the elevator, negotiate them up and down the too-narrow escalators, lean them against chairs in the restaurants, etc.

Still, that’s a pretty minor annoyance in the grand scheme of things and a small price to pay to play with coins all day.

Which is what we did all day Saturday in LB until the official end of the show at 4 PM – a source of coin show pride for CRO, since many other dealers packed up and left earlier in the day, or Friday, or even Thursday night.

So was it worth it for us? Yes. We sold a few more coins, bought a few, picked up our last grading, met a bunch of collectors at the table who could become CRO customers and scoured the bourse a final time for any last missed opportunities.

Where your author seriously contemplated a mid 5-figure item before deciding to hold off.

And while there were no fireworks in the form of someone walking a great coin up to the table on Saturday, we are satisfied in the knowledge that we would have been there if it had, we are sure we did not miss anything, and next time might be different.

Calling it a day and a show with one more schlepping annoyance, the usual reconsolidation of our show supply bag into a large suitcase, and inelegant process which always takes place in the hotel lobby, right before heading to the airport for the overnight flight home.

Where we can rest for one day before starting on our next Early Bird scheduled for Tuesday at noon.