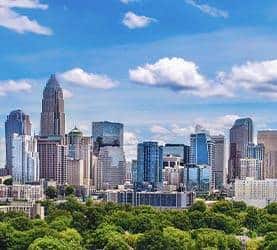 Make it funny
This whole thing started when I left for the Charlotte ANA show. John said to me: “Since I’m not going to the show, you must write the Road Report. Oh, and make it funny.”

Funny? Ugh, the pressure was on.

“Find something funny; find something funny” I mumbled to myself as I walked the aisles of the show when I got there. Fortunately, the well-known dealer (and our good friend) Harry Laibstain was there to bail me out. When I saw him behind his table he had a large blue, blow-up donut-like thing around his neck.

When I asked him, “Whassup wit dat thing?“, he told me that he slept wrong on his hotel pillow the night before and wearing the neck donut made his stiff neck feel a bit better. Obviously, I laughed at him and told him I was going to take a picture of him like that and plaster it all over the internet. After all, what are friends for if they can’t laugh heartily at a friend’s health problem? Judging from the reaction of others who saw him on dealer set-up day, Harry has many, many friends.

Travel Fun
I very shrewdly planned to only spend a little over 24 hours here at the Charlotte show, working the auction and scouring the bourse floor for goodies to put on our website. I had some success in buying, and headed straight to the airport to catch my plane.

Well, the flight back to Hartford was cancelled while I was standing in line waiting to board the plane. In fact, it was announced at that moment that all flight to airports in the Northeastern United States were cancelled.

Immediately 80% of the people in this crowded airport started scrambling to line up in front of the hapless ticket agents at each of the airline counters.

After 2 hours on the phone, I was pleased (?) to score a ticket home only 2 ½ days after I was scheduled to get there, and for a paltry additional charge of just $819. Of course, my luggage with all of my clothes and toiletries would get there well ahead of me (don’t ask me why my luggage could get there just 1 day late, but I couldn’t get there in less than 2 ½ days later).

So, I’m stuck in Charlotte for another 2 days, with only the clothes on my back. Note to self: in the future, remember to put a spare pair of underwear in my wallet, as there is absolutely no store in downtown Charlotte that sells underwear. None; nada.

At one point I seriously considered walking around the bourse floor in one of those bathrobes that my hotel gives me to use (hey, it works for Mafia bosses trying to act crazy to stay out of jail; why not for me too?). I finally decided that it just wasn’t the image I was going for (no offense to those of you reading this who really do walk around a bourse floor in your bathrobe. It looks good on you, I’m sure).

The Market
Oh yes – a report on the state of the rare coin market. Overall the show was characterized as “slow” by the majority of dealers attending. One joked that it was, “The best pre-Baltimore show he ever had.” The joke being that this Mid-Winter ANA show is taking place just one week before the blockbuster Baltimore show next week. Having 2 national shows back-to-back (with many dealers planning to go to just one or the other) most likely will dilute them both.

Nevertheless, the supply of ordinary and overgraded material was high; the supply of beautiful and unfussed-with coinage was rather low, as has become the norm. We picked up a select few pieces of early silver and completely original US gold, which we will feature soon on our Early Bird email to those requesting it.

One bright spot in the show was noted by another dealer friend, David McCarthy of Kagin’s. He handled the sale of a high six figure collection of 15 or so fresh, untampered with high grade pioneer gold coins. He gave us the quote of the show: “The coins were so original that the colors looked fake!”.