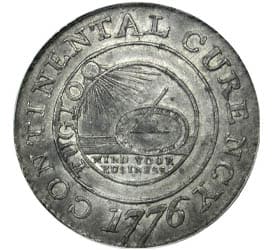 Editor’s Note: A slightly modified version of the following article appeared in the Colonial Coin Collector’s Club (C4) Newsletter, but since not all of our website visitors are C4 members, we thought we’d go ahead and post it here for your reading pleasure.

After an embarrassment of numismatic riches to describe in our previous years’ First Quarter Colonial Coin Auction Recaps, 2016 was downright ordinary in comparison.  And accompanied by a profound sense of déjà vu, as some of the same coins offered and commented upon by your author in recent years reappeared here, sometimes in new clothes (er, slabs), sometimes not, sometimes for wildly different prices than they realized in previous appearances, sometimes not, sometimes actually selling, sometimes not (i.e. not meeting their specified reserves). But there were some neat new coins too, with the whole lot of them about to be discussed by your author right now:

The quarters’ first auction was (as is the case every year) at Heritage at the FUN Show in FL in January, including a number of interesting, old world-y coins from an old Texas collection identified as the “House of Davis McKinney”.

Like lot #3529, a crusty, original 1652 Oak Tree Shilling, Noe-1 variety graded XF45 by PCGS. And while that had a lot going for it, it was also was a bit rough in places, and had a jagged edge which explained the very low selling price (for the issue and grade) of $4,935.

And then lot #3532, a just as original Oak Tree Shilling, Noe-5 variety from the same consignment, this graded XF40 by PCGS and also not exactly choice with a middling strike and half a tree bringing an also low for the issue and grade $3,995.

And then we were on to Platinum Night and lot #5206, a 1652 Pine Tree Shilling, Noe-1, graded MS65 by NGC which was offered at an opening bid of 36K and had no takers. This after bringing $49,350 in the Partrick sale twelve months earlier.

From Tampa we then traveled all the way to the world wide web, Ebay to be specific, on January 11th, where a 1787 New Jersey Copper listed by a well known national dealer, graded AG3 by ANACs and including no other information whatsoever, was ID’d by sharp eyed specialists as a Maris 83-ii and bid up to $15,100 (including a sniping jump of about 2x in the last one minute). Illustrating once again that if you have a rare NJ you probably ought to just stick it on Ebay and describe it as a “Coin with a horse on it”.

Followed by a smallish session at Goldberg’s at the end of January which thankfully (for the purposes of this article) included lot #358, a 1787 Fugio Restrike in Silver mis-described as copper which was purchased by a dealer whose book bid the auction house failed to execute. And while that may sound impossible, I know it’s true since I ended up buying it from that guy.

Followed by the Heritage session in Long Beach February 4th through 7th which included more colonials which had been seen in recent years:

With our next highlighted lots at Stack’s-Bowers on February 10th, including two Continental Dollars:

Lot #73, a Newman 1-C CURENCY variety, looking pretty wholesome, graded AU58 by PCGS and realized $64,625, a price very much in line with where these have been in the last several years.

Then we were on to Heritage in Dallas in early March. Where we were once greeted again by lot #4707, the 1722 Hibernia Rocks 1/2p graded AU58+ by PCGS. This particular example first appeared to the current crop of collectors in the Craige sale of March 2013 without the + at $21,150 and then a series of subsequent auctions where it seems to get a little bit cheaper each and every time.

Followed immediately by lot #4708, an artfully double struck 1788 Connecticut Copper in an NGC MS62 slab which headed in the other direction, realizing $30,550 vs the $25,850 it realized in the aforementioned Newman sale of 2014.

Followed by another one of those sneaky NJ Coppers, this a pleasing chocolate brown circ. example of Maris 45-d. And while it was presented in a non-descript NGC F15 slab, it was properly attributed and realized $3,995 (which I assume surprised the Heritage catalogers who had unceremoniously placed it in the “non-floor” session with the less expensive stuff). Honestly, I think it would have brought even more if it was unattributed, as people seem love to “discover” these things on their own, sweat for two weeks hoping no one mentions it on one of the various numismatic chatrooms and then leave a snipe bid the size of an airplane hangar.

Less expected: Lot #12163, the recently dug and extremely crispy 1787 New Jersey Maris 71-y, brought $4,230. I really thought that would bring more than that even if it was pretty far gone.

And then in the evening session there were a few more high and low numbers, starting with the latter and lot#13001, a wavy 1652 Pine Tree Shilling, Large Planchet, Noe-10 variety graded XF40 by PCGS which brought just $4,230.

But followed a bit later by lot #13007, a Washington Funeral Medal in Silver graded AU55 with a filled hole which brought waaaaaay more than I expected at $15,275.

Wow. How do we make any sense of these often low, occasionally high and sometimes in-between results? Honestly, I do not know, but I’m going to try anyway:

Which I fully expect we will see and then read about here if any such colonials come to market in Q2.