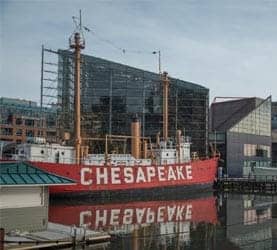 With the enthusiasm of a well-behaved child tearing down the stairs on Christmas morning, Team CRO is heading back to Baltimore for the first of three (3) Expos this year, this the XL spring version which is always one of the best events of the year.

And we are certainly expecting big things this time for several reasons:

Which should all add up to an entertaining event starting with pre-show activities on Wednesday followed by dealer set-up at 5 PM.

With whatever happens there to be described right here in our daily Road Reports posted each and every morning of the show.

Hey everyone, let’s take a look at how Wednesday turned out here chronologically:

Making for an altogether productive first day here in Baltimore.  So we will be ready to go first thing Thursday AM with the start of dealer set up, part II.

And then blog all about it right here on Friday AM.

For those who would like to see the Baltimore Inner Harbor hotels get back to their pre-Covid occupancy levels you would be pleased to know that it is actually very crowded here, with long lines at reception, in the restaurant, gumming up the elevator, etc.

Unfortunately, part of that seems to be some kind of school group here whose primary mission is apparently to run up and down the halls screaming “HEY THOMAS” at 3 AM.

Now, I’m not sure who this Thomas is, but he is apparently a very sound sleeper and the only way to wake him up is to shout his name and then machine-gun knock on his door 75 times in a row real fast, take a brief break and then do it again.

The good news is that  I was actually already awake and typing like crazy when that was happening, so for me this was merely entertaining blog fodder, and not some reason to call hotel security, for example.

In any case, we would eventually make our way to breakfast, and then on to the convention center at about 8:30 where we would immediately jump back into commerce and start trying to find cool coins all over again.

And we were pretty successful, buying a bunch of cool and super popular tokens and some neat US type from various sources around the room and/or which walked up to the table during the day.

Many of which we put in the back case, but others that we placed right into our display to fill empty slots and thus creating, once again, the major CRO dilemma repeatedly encountered at all shows.

Namely, do we hold back the NEWPs and wait for the next EB, or strike while the iron is hot and there are ready customers at the table and sell a few right now?

Our answer, in general, is “yes”.  In other words to do both to some degree, since 1) Having new coins in the cases is always important at any show to give attendees a reason to bolt over to us when they walk in, 2) We often have to lest the cases will look kinda empty which drives MaryAnn crazy, and 3) We sell some of them right now and thus generate the cash flow necessary to buy other coins and/or pay our tax bill, for example.

Still makes me kinda queasy to sell them though, since every time I buy anything I am imagining how it will look on an EB, how fantastic the picture will be, what will be in the row with it, etc. and now that is not going to happen.  Oh well.

It did provide for some entertainment though, as a customer came to the table, said he was looking for a very specific coin type, was delighted when I handed him a brand new spectacular example of said type that we had acquired mere minutes earlier, asked if he could show it to one person, walked away for 3 minutes, came back and inexplicably said “I’m going to pass”.

And then – as seems to happen a lot on the coin circuit – a dealer friend walked by maybe 37 seconds later, saw the very same coin and bought it right then and there.  Can’t say I blame him – if I saw that coin on a bourse floor in another dealer’s case, at the price we were asking, I’d have bought it myself.  Seriously.

With your author’s buying efforts continuing on though at a diminishing rate, since we had by then scoured the floor for cool coins and already snagged most everything that was not nailed down.  Though a few more walked up to the table through the afternoon allowing us to add to the growing pile and leaving us in good shape for the next list unless we sell a whole bunch more NEWPs on Friday / Saturday which is frankly not impossible.

Throughout all of which we would get a periodic text from PCGS telling us some of our on-site grading was ready, a welcome return to how things used to be in the olden days pre-Covid when we graded most of our coins at shows since it’s convenient, saves shipping costs and allows us to get coins to market weeks (or sometimes months) faster.  It also helps when the results are as we had hoped, which has delightfully been the case here pretty consistently.

With our last deal of the day the sale of a couple of Doily holdered Morgans, after which we headed over to the Sheraton for a drink with some dealer friends before going to dinner in Federal Hill, a neat neighborhood we discovered last Baltimore show and plan to revisit in the future.

Finally returning to the hotel about 10 where we looked forward to further early morning escapades by Thomas and his friends, followed by another full day on the bourse on Friday.

Eschewing the over-crowded hotel restaurant on Friday morning, Team CRO went straight to the show, availed ourselves of the better-than-you-might-expect convention center lobby snack bar, elegantly ate breakfast in the booth on top of some grading forms and began multi-tasking ourselves directly into numismatic pursuits.

And they would be significant on what turned out to be our busiest day of the show by far, with high octane sales in all categories, several successful numismatic trades, some neat new purchases, a bit of last minute lot viewing, more coin grading, a bunch of deal figuring and, in all, just enough activity to completely exhaust your author by about 4 PM.

We also had two more of those against-all-odds situations where a customer walks up to the table and asks for very specific and unusual items that we actually have:

Instance #1:  Long time gold customer says he is looking for an 1842-C Large Date $5 and an 1860-C $5, both of which we happened to have sitting in the case since we bought them last week.  Making this literally the first and only show CRO has attended in the last 20 years where we could have answered yes about either of the coins in that query.  Alas he would only buy one of them on this day.

Instance #2:  New customer says he is looking for a nice 1848 Liberty Seated Dollar with good color in XF, an example of which we had, amazingly, received back from grading about one hour earlier and was now sitting in our back case.  And since this is the only 1848 $1 we have ever owned in any grade, this was, again, the only show where we could have ever answered yes to that question.

So when that sort of thing starts happening, you feel like maybe it’s your day.

And that was indeed the case minutes later when we made a nice mid 5-figure sale at the table followed by a bunch more smaller ones, including coins in every category and a wide range of price points, slabbed and raw, common, rare and, in one case, likely unique(!).

Thus turning what had been a good show up to that point into something close to epic.

Which left us feeling fine as we headed off to dinner with some old and new collector friends, returned to the room at a civilized hour and tried to rest up for what we expect to be a long and busy day on Saturday in which we will be on the bourse for the duration doing as much additional business as possible before we catch our late night flight home.

From where our last RR from this show will be written first thing on Sunday AM.

OK, now back home in Weston let’s recap this show using another of our series of random observations presented in no particular order:

Kudos to the hotel staff here who apparently took my complaining about the kids screaming and pounding on doors in the hotel all night to heart, and subsequently had a security guard roaming the halls at 3 AM.  I know this because the guard’s walkie talkie made that loud crackling sound that woke us up anyway.  Oh well.

For the second Baltimore show in a row a table visitor asked us something like “Do you ever actually sell any coins here?”.  Yes, yes we do.

Another dealer in our aisle reported a 6-figure sale on Saturday, which any coin dealer would tell you is a most welcome development.  And while we did not do that, we did have two 5-figure sales during the day, and heard of similarly robust Saturday activity from 2 other dealers in our 400 row.

That tomato bisque they serve at the convention center lobby snack bar would not be out of place at a high end restaurant, so kudos to the chef.

We got our last grading back Saturday AM and we’re pleased with pretty much everything across the board at this show.  Especially the couple of reholders and a label correction which we always prefer to address at shows where it’s quick and easy.

The pandemic-related flight schedule changes have us temporarily flying into and out of Washington DC, which made for an inconveniently long 45 minute Uber ride when we arrived here Wednesday which was easily trumped by a 2 hour ride from hell when we left Saturday afternoon.  Could have been worse, I suppose, since the driver’s gas gauge was flashing empty for the last hour of that journey.  I’m not sure he noticed, though, since he was too busy trying to show us family photos on his phone while driving.

We dodged a major bullet at the airport too, as every other flight to Boston was delayed for 3 hours+ except ours which actually got us home early.

Where we can now relax for a full 24 hours before diving back into coins, try to catch up on everything we missed here in the office while we were away, open boxes that came in, ship orders out and start prep for our next Early Bird which will go out one week from Tuesday on April 12th.