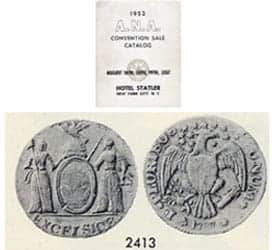 This Coin Commentary may sound nakedly self-promotional, but I’d like to tell the folks out there a little about my business partner and the half owner of Coin Rarities Online, John Agre.

Hmmm, I guess it really is self-promotional. But then again, this is our website, after all. I should also point out that John has no idea that I’ve written this article and posted it on the site, so it will be fun to see how long it takes him to figure it out (and how ballistic he goes when he does).

In the past few years, we’ve had legions of people ask us: “Why the heck did you two become business partners? OK, so it wasn’t legions of people. But a number of people really have asked how it happened, so here’s the scoop – from my point of view, anyway.

I started Coin Rarities as a sole proprietorship lo those many years ago. I wasn’t looking for a business partner. In fact, I was purposely avoiding it. As any student of commercial numismatics (i.e. the study of the business side of the coin hobby) will tell you, nearly all coin dealer partnerships end in disaster.

Yes, there are some well known exceptions. But for every Jim Halperin / Steve Ivy success story, there are 10 or 100 coin partnerships eventually torn to bits on the steps of courthouses across this great land. For whatever reason, coin dealer partnerships rarely work out. I’m not sure why, but what starts out great usually ends up with 2 guys running each other’s bids up at coin auctions a few years later. I wanted nothing to do with the idea.

First, John was a Customer of CRO

I first met John when he became a customer of mine, buying coins to keep or to sell, asking me about 300,000 questions, talking about upcoming auctions, etc. After a while, we became friends as well.

At the time, John had a serious job in what coin dealers affectionately term ‘the real world’, and had spent years managing P&Ls, evaluating companies and (in his words) ‘cracking coconuts’. Many of these skills would prove handy in the running of a coin business, which after all, is not so different from other, low margin businesses and features its share of coconuts (I think – though really I have no idea what that means).

We discussed it over a period of months, bought a few coins together with good results and agreed to team up on a trial basis, continuing if it went well. I guess it is going well, as that trial has lasted almost 3 years now. But it soon became clear that it wasn’t just his business acumen that has proved useful in growing Coin Rarities Online.

I call him ‘The EYE’

There is no other way of putting it – John has the eye of a connoisseur. It is a remarkable and rare talent, really. After looking at high-end coins for literally decades (he purchased his first expensive coin – a pattern, actually – when he was just 8 years old), John can tell a primo, high end coin at a quick glance from an ‘almost’ coin. I liken it to an expert in fine art who can consistently tell the great works of art from the near-great works.

Most people never will develop that keen sixth sense about the innate quality of a coin to the extent that John has. And it has been of great benefit to our customers, both in selecting coins they won’t have to upgrade in the future, as well as evaluating what they have in their existing collections.

Plenty of collectors have subjected their first line collections to John’s sometimes withering assessments of the coins they’ve bought. It can be painful just to hear it. But universally, customers brave enough to subject their collections to John’s eye have been grateful for him for being so brutally honest with them, and as a result they weed out the ‘almost’ and the ‘hidden problem’ coins from their collections to focus on building the best set they can (this can be the “best” Very Fine type colonials costing a few hundred dollars each – it doesn’t need to be six figure rarities. John admires choice coins of all kinds).

The real downside of this ability (sort of like having Superman’s X-ray vision) is that coins that aren’t choice don’t appeal to him in the slightest. Now, in the colonial and Early American coinage series – areas in which we specialize – there are some great rarities where every single known specimen is a ‘problem coin’. This is where John and I have some of our most interesting discussions.

That Phrase – that Maddening Phrase!

I happen to love great rarities, whether they are choice or whether they exhibit some “warts” and flaws. I’ve dreamt about holding many of these coins since I was a kid trying to memorize the Redbook, and can truly appreciate all rare coins for what they are.

John, on the other hand, has no interest at all in coins that have been conserved, or cleaned, or have major flaws, or nasty spots, or other problems. In fact, John has an expression that has, at times, driven me crazy.

When I show him a coin that doesn’t meet his exacting standards – does he say, “Thanks for showing me that coin, Dave, but I personally do not care for it”? Noooooooo.

John winces and utters his famous phrase: “I wouldn’t give ‘ya anything for it!” (and he says it with such contempt in his voice that I have a really hard time imitating it). He is also 100% serious.

It drives me nuts sometimes. But he is usually quite right. People like nice coins – they are a pleasure to own, easy to sell and always in demand. And after all, we are in the business of finding and offering nice coins to collectors who have developed highly refined tastes.

When we first met, John was fanatical about pedigrees and tracing coins through time. I thought it was sort of amusing at first, but didn’t pay too much attention.

And then bizarre things started to happen.

I had a new colonial coin in my inventory years ago and John picked it up, looked at it for a grand total of 5 seconds, and said that it was plated in an 1890 Chapman sale “in the upper right corner” – he could tell by the planchet shape. I thought he was kidding at the time and sort of shook my head. But later I checked – he was right.

Or another time I handed him a coin at a show and he said, instantly, “This coin was plated in the 1952 ANA catalog. I recognize the small nick on the left side of the oval in the center of the New York Arms”.

Or there was that time we found a coin on Ebay and told me that “This coin was part of the Roper collection, but it was not plated there – it was plated in the Taylor catalog 4 years later, and there identified as Roper’s.”

Or that time recently when I asked what he thought of an expensive coin in an MS63 holder coming up in an auction and he said “That’s been repaired – the coin was last sold here, it looked like this, and was fixed here.”

Or when he was reviewing a collector’s holdings a few months ago and said “Hey, that’s the Garrett coin – I always wondered what happened to that one.”

This has happened so many times that I have nearly ceased to be amazed by it. John has a bizarrely photographic memory. So what does someone like me do to someone like him who displays such an amazing ability?

Well, you make fun of him, of course. Whenever he does that pedigree thing, I say to him, using my finest Dustin Hoffman impersonation from the 1988 movie Rain Man: “Uh oh, gotta watch Wapner!”.

He shoots me a genuinely perturbed look whenever I say that. This makes me quite happy, of course.

There is a saying that goes something like: When two partners agree on everything, one of them is unnecessary. I can gleefully report there is absolutely no danger of that happening here.