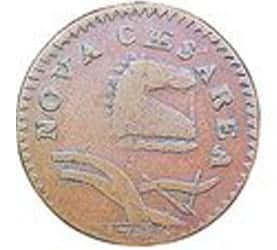 The following article by our own John Agre appeared in the Colonial Coin Collector’s Club (C4) Newsletter, but since not all of our website visitors are C4 members, we thought we’d go ahead and post it here for your reading pleasure (though with the addition of a bunch of no-holds-barred editorial comments that we reserved for this site):

It’s been a pretty interesting first three months of the year in the world of colonial coin auctions, with significant offerings from Stack’s and Heritage, an interesting piece or two at Bowers and Merena, and an assortment of coins on Ebay ranging from the fairly typical (i.e. a ton of Chinese copies), to the pretty nice (lots of contemporary counterfeits and an occasional attractive type coin) to the (almost) once-in-a-lifetime-coin-you-never-expected-to-see-anywhere, let alone on Ebay.

Fortunately, your author attended all of the live sessions in person, bidding, watching, taking copious notes, kibitzing and availing himself of the free food (which in many cases was delicious) and can now spew forth with observations.

So let’s begin at the beginning, with the Heritage FUN auctions on January 3rd with the “Signature” session (for coins valued at roughly $1,500 to $10,000). And it was a decent auction, which brought prices that were frankly all over the map:

Lot #3004, a lovely, original, evenly struck Pine Tree Small Planchet Shilling of the common Noe-29 variety in an NGC Fine 12 holder brought a strong $3,450 for the grade.  But that was a far better than average example, and the demand for Mass silver that looks like that is as high as ever (it is worth noting that examples that are not nice, that have been cleaned, or are impaired in some way even if they are in holders, is low, and such pieces can regularly found on Ebay and elsewhere gathering numismatic dust).

Lot #3017, a 1670-A French Colonies 5 Sols in an MS62 PCGS holder brought a staggering (to me) $19,550.  I say staggering because that same coin brought exactly half that amount ($9,775) when it last sold at Heritage just two short years ago in May of 2008.  I can only conclude that this was purchased by a die variety specialist, or someone who saw an otherwise hidden value in this piece that I didn’t.

But while that piece appreciated nicely, not everything in the next evening’s Platinum Night session (earmarked for coins valued at roughly $10,000 and up) followed the same trajectory:

Lot #5403, a 1787 New York Excelsior Copper enthusiastically graded AU55 by PCGS (despite a square dig in the central reverse) sold for $34,500.  Interestingly, this piece too can be traced to that same May 2008 Heritage sale, but this one went up since that time, having sold for $29,900 2.5 years ago.  Personally, it pains your author that this impaired specimen has been the pop 1/0 finest graded specimen at PCGS for years, while the two below it at AU53 on the pop report are clearly finer in every respect and have sold for signficantly higher prices privately in recent years to eager buyers (we know, becuase we sold both of them).  Heck, we’d take most of the AU50’s and XF45’s we’ve seen over this AU55, too.

But that wasn’t as exciting as lot # 5408, the Washington Roman Head Cent in a PF61 PCGS holder. By my count this is the 5th different example of this type to come to market since May 2004. And many readers will remember this coin when it was first offered in a November 2005 Smythe sale, described extreeeeeemly optimistically as “Gem Proof”, offered uncertified, where it brought (if memory serves) in the low $40K’s (signaling the first run-up of this type from its historical level).  Then it came to Heritage in 2008 and brought a very, very robust $92,000.  Which brings us to the present session, where it brought “only” $66,125 (a 28% decline in 2.5 years).  I guess one can at least say that this was a better deal for the buyer than the guy who won it in 2008.

I don’t know what to conclude about this session in general other than to say that a number of these coins seem to have traded quite frequently in recent years, with a great deal of volatility.

The next session of note would be held by Bowers and Merena, also in Tampa, containing just 15 colonials, but with one notable piece:

Lot #59, a Sommer Islands Twopence graded AG3 by PCGS, realized $18,400, which I guess represents the most affordable version of one of these coins in a PCGS holder (a mandatory requirement for a lot of monied buyers these days).

The next auction of note would be a few weeks later at Stack’s with their Americana session, and though it was held in a blizzard (as was well documented in our Road Report from that auction) most of the usual suspects were in attendance, either in person, or via representative, including at least one well known colonial dealer who made it with literally seconds to spare before his first target lot came up.

The first really interesting lot was the first colonial, lot #5801, a genuinely attractive Willow Tree Shilling that was, according to the catalog, found by a metal detectorist in a Massachusetts farm field (which sounds suspiciously like my yard), brought $43,125 to a book bid and was sold seemingly before anyone could blink.  I looked at that coin under a loupe for about 10 minutes and honestly thought it was better than some Oaks and Pines I’ve seen in straight graded holders (though, of course, I am not a professional coin grader).

Lot #5805, an American Plantation Token 4-D variety described as a die combination “whose existence is not confirmed” in the Whitman Encyclopedia of Colonial & Early American Coins (which I found confusing, since this particular example has been known and was described accurately, as noted in the current catalog, in another auction 38 years ago) brought $25,300 (a new public auction record for any coin in this series).  As an aside, I met the consignor of this coin a few weeks after the sale and he was very, very surprised with this result, since he had been told in the past that it was a “restrike” with limited value.

Lot 5836, a rare Virginia Penny in what might be the most affordable condition possible (cleaned, with some surface business) brought a very strong $17,250 on the floor.  That was not too far below the price of some pretty choice examples in recent years.

Lot 5838, the newly discovered and very crusty (i.e. totally original and unconserved) Pitt Farthing with full, brilliant silvering(!) graded AU55 by PCGS and the best one I have ever personally seen (though there is a known specimen plated in an old reference book considered to be a full blown unc. which was curiously not mentioned by the current cataloger) brought what I thought was a fair $94,875 to the bidder noted above who showed up just in time to buy it.

And then the state coppers started, featuring a lot of collector grade coins with minor and not-so-minor problems, including a long list of NJ coppers in low grade that realized roughly $100 to $300 (with the low point being lot #5936 at $23 (twenty-three) all-in.  I do not know what the consignor had paid for all these coins back in the day, but I assume they were bargains.  I could not help but thinking, though, that if he had spent just a little more, and acquired pieces with better color and surfaces, they would have sold for many (possibly many-many) multiples of those prices in this session.

However, a handful of his rarities did plenty well enough to carry the day, and, in total, I am sure this set proved to be a very good investment through the years.

Lot #5956, a Maris 37-X NJ, considered to be Rarity-7, and frankly a pretty decent looking F/VF which I believe the consignor cherry-picked years ago, brought $17,250.

Which led us to the Machin’s Mills coinage, where lot #6051, a newly discovered unique variety in well worn but not-unattractive condition brought a very strong $40,250 to another specialist.

The next notable auction would not be held by a big company, in a large room, and there would be no buffet served.  This one would be on Ebay, where a formerly unique New Jersey Maris 18-L suddenly appeared on January 30th, completely out of the woodwork, previously unknown, but (and here’s the kicker) correctly attributed on a 35+ year-old ANACS grading certificate, and housed in a PCGS VF35 holder.  Also, and just as surprisingly, it looked attractive (which, in my experience, is not the norm for rare things that just sort of pop up).  And, as has been reported extensively in the trade press and numismatic chatrooms, it did very, very well, running from its $995 starting bid up to $50K+ over the next week, jumping to $71K in the late stages and then, finally, to the nice round winning number of $105,655.55 in the final seconds.

My view is that that’s probably about what it would have brought in any venue (or at least any venue where the major players knew about it – which was definitely the case here).

This was a significant enough event that it found its way to the cover of Coin World, which is infrequent territory for things colonial.

And then we were back to catalogs, and podiums and auctioneers and stuff, this time at the Heritage Long Beach auction which had some more notable pieces in it:

Lot #3001, a Noe-7 Oak Tree Shilling in a VF30 PCGS holder, brought $7,475, which is a fair bit more than the $5,577.50 this same coin brought when sold raw at Stack’s in March of 2010, even though Stack’s graded it higher, EF40, as a raw coin.  I think there is a moral to that story, which is that PCGS slabbed material tends to bring more money even when the grades are more conservative.

Lot #3011, a 1788 Connecticut Miller 1-I in a F15 ANACS holder brought $6,900.  That coin was micro-porous, and would not have been graded that high at PCGS (for those who care about such things), but it still seemed pretty cheap compared to some of the less attractive examples that have sold in recent years.

Lot #3014, yet another Washington Roman Head Cent in a PF64 PCGS holder sold for $100,625 to an internet bidder, which is just a bit less than this same piece brought at Stack’s last summer.

Lot #3019, a hash lot of 19 pieces evidently group lotted because the catalogers deemed it nothing special, actually contained some choice Machin’s Mills pieces and sold for $3,737.50 to a well-known dealer.  I would guess one of the Machin’s alone might end up bringing that much on the aftermarket.

So what can we conclude about the first quarter?  Several things, I think;