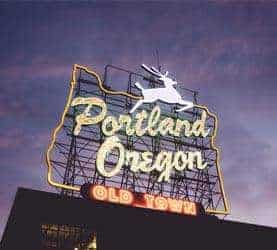 Top 10 reasons we are excited to attend the ANA Show in Portland this week:

And then of course there is number 11:  The fact that we get to blog about everything that happens at this show right here in this space every morning.

My plan on Wednesday was to head over to the convention center in the morning, view the Stack’s-Bowers lots real leisurely-like and then then roll into the bourse at 3 o’clock for dealer set-up.

Until I read the schedule and saw that lot viewing would not begin until 1 PM, so I got some work done at the hotel, had lunch with another dealer and then eventually meandered down the street to the show arriving at about 12:30.

And then cooled my heels in the lobby for another 45 minutes or so until lot viewing actually opened, at which time I roared through the entire session in about 2 hours finding a lot more to bid on than I would have expected.

Followed by standing in a really long queue waiting for the bourse to open, and then finally racing into the large room to set up table #531. Observation #1: The CRO table is bigger than I expected, with 5 display cases and three chairs for your author to alternate sitting in while helping customers. Observation #2: There is a dearth of electrical outlets and a Gordion Knot of extension cords which have been wound up for so long that they can no longer be fully unwound and are thus perfect for tripping a numismatist as he attempts to move around in that space.

But between those bouts of sitting and/or tripping, business was better than I expected, with some pretty good wholesale sales to multiple different surprisingly enthusiastic buyers.

Buying was decent too, as I found, among other things, a neat run of crazy toned seated dimes, a few of the requisite CRO-style gem tokens and one wicked raw colonial before they switched the lights off in the room, our indication that it was time to go have dinner.

Which I did with a dealer friend utilizing the very efficient light rail system here in Portland to get totally lost, wander around the city and eventually find a cool restaurant in the Pearl District and then have a grand adventure returning to the hotel during which every single person we met was extremely friendly and wanted to be helpful, but couldn’t answer any (literally) of our questions about which train to take, or where to get off it.  We were not alone though, as even some of the locals (identifiable by the fact that they were carrying a massive IKEA box with them) kept swearing at the little map in the train, apparently dismayed that it was not going where they expected.

Not sure what happened to those people (or their enormous box), but we made it back to the hotel just in time to collapse and be totally well-rested for what I now think might be a pretty busy Thursday here at the show.

And if it is, or even if it isn’t, we will describe every last detail here in this space on Friday AM.

Under sunny skies I confidently headed out of the hotel on Thursday morning for the 15 minute walk to the show, stood at the corner, couldn’t figure out which way to go, stared at Google maps for about 5 minutes, walked around the entire building and then headed straight as an arrow to the convention center arriving at about 9:30, well after all of the other dealers were already there.

Except for a contingent from the east coast who apparently were snowed out in some kind of weather event that, for the first time this entire winter, managed to miss us in New England.

Which meant that there were a few tables either totally empty, or which had been commandeered by some other enterprising dealer in their place.

Still, it was pretty active in the room, and I kicked things off nicely with the sale of our 1813 Fat Head $5 and a neat old-holdered Walker, plus some of the other typical assorted odds and ends that never make it to the website and which I always sell at shows.

And then later sold a couple of Fugio notes, a big pile of error Lincoln Cents, and a neatly toned Austrian coin that I probably should have tried to upgrade, but didn’t.

Once again I bought well too, snagging a trio of crusty $20 Libs, nicely toned U.S. type, a wacko Conder of a variety I’d never seen before and a wickedly toned South Peru 8R which is going to look really good on the website.

Sometime in there I also saw a beautifully toned coin from Afghanistan which I know absolutely nothing about and therefore didn’t buy, later regretted, decided to go for it, couldn’t remember where I’d seen it, scoured the room table by table, finally found the spot where it had been and learned that, of course, it had subsequently sold to someone else. Not really sure if I should be happy or sad about that, but I was willing to take a flyer.

After which things wound down and I eventually headed out to dinner with a few dealer friends, hailed a cab with great effort, and, based on the recommendation of a local foodie, went to some kind of crazy secret restaurant which is inside another restaurant but not labeled anywhere. Neither was the men’s room door, which I guess is great if you are some kind of adventure seeker, which I am not (except, apparently, when it comes to coins from Afghanistan).

And who knows, maybe we’ll find some more of those on the bourse floor on Friday.

A lot of times at these shows we’ll meet people at the table who are contemplating buying a coin from us, or potentially have a coin to sell to us, who say some version of “I’ll come back later”, or “I’ll see you tomorrow”

And while we’re sure everyone always has the best of intentions, those same people actually seem to return maybe only 10 or 20% of the time or so. But that’s not what has happened here in Portland.

Case #1: Collector stops by the table late on Thursday afternoon, looks at a coin in some detail, seems to like it, but says he might come back the next day. So I was pleasantly surprised when he actually re-appeared bright and early Friday morning, bought said coin and then discussed with me his detailed collecting methodology (which was one I had never heard before) and showed me his want list which was both long and contained many coins which are actually obtainable (unlike most want lists I see), and then added his name to our Early Bird list concluding what dealers call a ‘real good transaction’.

Case #2: Collector stops by the table on Thursday, looks at a number of different world coins and then asks “Do you buy coins like these?” To which my answer was of course – we have to buy coins to sell coins. He then explained that he had some things I might like and would try to retrieve them from his safety deposit box Friday morning. Which sounded good, though I honestly didn’t really expect it. But lo and behold, he did come back just minutes after the previously described customer, and set a small stack of 4 coins on one of our cases. Of which I ended up buying three, which I thought was a pretty good result. But when I started to say thanks for coming by, he added those three magic words: “I have more.” Which turned out to be 8 (eight!) PCGS boxes filled with cool world coins mostly in old NGC and PCGS slabs of which I bought as many as I possibly could. And then told me he had many other coins which he would bring to me at the next Long Beach show. Which is exactly the kind of deal we hope will happen and new contact we hope to make at shows in infrequently visited cities like this one.

While those two transactions alone would have made for a pretty good day, we ended up doing a lot of other deals in what is turning out to be a much better ANA show than we expected.

And that does not include anything that might happen on Saturday, during which I have been told by locals to expect a pretty good crowd to show up. Which made me feel good about my decision (made weeks ago) to stay here all day long and return home on Sunday.

From where we will write the last installment of this Road Report (which could possibly be filled with many additional stories of buying and selling great things).

Well, the people who told us that a large crowd would show up on Saturday were absolutely correct: There was a steady stream of visitors from start to finish, easily eclipsing the attendance of any previous day at the show.

Now, the fact the majority of them were boy scouts, or people who had never before seen a coin in a slab, was perhaps not exactly ideal from the perspective of a dealer with slabbed coins to sell (such as your author), but everyone here seemed to be having a good time, and I did have fun doing some extensive numismatic show and telling during the day to an extremely appreciative audience.

From a selling perspective, however, it was pretty much a bust, with wholesale, colonial, world and US coin sales combined totaling 1 (one) coin in the 6 hours we were on the bourse floor during this day.

On a more positive note, we continued our good buying in Portland, with another half a dozen cool U.S. and world coins snagged on the floor and from visitors.

We were also pleased to meet a few more local customers we had previously known only online.

And so, in total, despite the lack of Saturday fireworks, we had a quite good show overall, certainly better than we expected.

I think everyone enjoyed the surroundings too, with a lot of cool restaurants and things to do in a city which was NOT blanketed by 6 feet of snow.

Actually, our only real complaint about the ANA’s Portland location is that it took too long to get to for us New Englanders, with no direct flights and some awkward / long / inconvenient connections via cities that seem kind of out of the way to begin with.

Come to think of it, that seemed to be a common problem, since there were at least 10 other dealers on my 10:55 PM flight to Atlanta, all of us ultimately en route to cities scattered about the east coast and all of us grousing about the fact that we would not get home until noon or so on Sunday.   By U.S. coin circuit standards, that’s at least as long as it has ever taken us to get anywhere.

But I did eventually make it back just in time to write this blog, after which I will do some serious sleeping before starting on our next Early Bird which will be launched from CRO World Headquarters on Tuesday at noon east coast time and which will contain some (but not all) of the cool things we bought at this show.