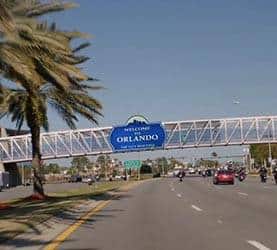 Good morning coin enthusiast and welcome to our second (2nd) Road Report from Florida in a two (2) month period.  Not that we’re complaining, since New England at this time of year can best be described as “It is 31 degrees outside right now“, and we find that a quick blast of 75 degree weather can do wonders for the psyche.

Also good for the psyche:  A large coin show and accompanying auction, both of which we will immerse ourselves in during what figures to be an action-packed week of activity here in Orlando chock full of buying, selling and schmoozing opportunities.

And CRO will be there for all of it, working from our command center at table #919, scouring the floor for cool coins and writing all about all of it in our RRs posted daily from the show.

After an effortless flight to Orlando your author emerged from the airport into surprisingly comfortable and breezy 77 degree weather, jumped in a cab and was at the sprawling show hotel a few minutes later where I found my room available for immediate occupancy and all well with the world.

So I had a fast salad and then walked over to the even more sprawling (possibly the sprawlingest) Orange County Convention Center, eventually found the Kagin’s viewing room and parked myself for some intensive lot viewing with the half dozen other people who had, like me, completely ignored the posted ANA schedule which said that lot viewing would not begin until Wednesday.

After which I headed back to the hotel, answered email, spoke to a couple of customers and then – for the first time ever at a show – worked on my taxes, since that needs to be finished next week and I have no other time to do it.

Taking a break only for dinner at the hotel with a dealer friend during which we discussed our latest market observations which were pretty different and not surprising, since we sell markedly different kinds of coins in different ways.

For us, the last several months have been as busy as we can recall, making Job One here (as it usually as it all shows and auctions) just finding enough interesting new CRO-style material to populate our Early Birds.

Starting during dealer set up on Wednesday afternoon, unless we find something before that earlier in the day.  And, of course, if anyone reading this has anything fresh, cool and interesting to offer us in person at the show or by phone or email, please do.

With whatever we do, see and find to be described right here on Thursday AM.

Nobody likes a quirky schedule more than your author, so of course I was a-b-s-o-l-u-t-e-l-y delighted with a Wednesday which had dealer set up starting at the bizarrely late time of 3 PM, and absolutely nothing official to do before that.

And since I had finished lot viewing yesterday afternoon, and completed my taxes last night, I could wake up at a civilized hour on this day, hit the gym, have a leisurely breakfast in my room, answer email, make a few calls and then mosey on over to the convention center at 11 AM figuring, hey, maybe I’d run into some other dealers there and, who knows, maybe even do a little business over the next ~4 hours.

As it turned out, (almost) every other dealer in Orlando seemed to have the exact same plan, as the convention center lobby turned into a full blown impromptu bourse by early afternoon, with dozens and dozens of dealers all sorting through each other’s boxes and engaging in high powered numismatic commerce.

Including your author, who extracted a dozen distinctly original silver and gold federal coins for the upcoming Early Bird from a variety of different sources, and one more long awaited piece for a customer want list. Plus a couple of other maybes, and two coins on which I was told I was the 2nd in line. Not a bad early afternoon’s work IMO, especially considering it was so unexpected.

After which we all inexplicably formed two long, single file lines and then neatly filed into the bourse room, set up our respective tables and resumed right where everyone left off.

At least that’s what I did, racing around the floor looking for more interesting coins and finding some, though not as many as I had hoped on a day in which some of my primo target dealers had not arrived yet.

But I charged ahead anyway, scouring instead some unfamiliar tables and kept looking through coins until the suddenly-upon-us 6 PM closing time, at which point we all suddenly stopped everything, packed up and headed out.

Which for me would be to dinner at the hotel with a dealer friend and an early evening so that I could be well rested for what figures to be a very tiring Thursday with the bourse floor open from 8 AM to 6 PM, the Kagin’s auction right after and your author there for ALL of it.

Working backward from the scheduled opening of the bourse floor, and allowing sufficient time for our usual blog writing, gym visiting, breakfast eating and email answering, your author was up at 5 AM on Thursday and STILL barely made it over to the convention center just as they were flinging the doors open and letting everybody in at 8 AM.

Starting what would be an intensive 10 hour day of meeting with collectors and dealers at the table, interrupted by high speed trips around the bourse floor looking for more new coins that we had not seen in our limited show action Wednesday.

And we are pleased to report pretty good success on both counts, with an impressive pile of new coins now stacked in our back case, and steady sales in all categories (including one XL item sold via layaway, and another expensive coin sold via partial trade involving another dealer).

Every one of which coming and going was a federal coin until late, late in the day when a neat colonial walked up to the table and was snapped up by us in 6 seconds flat.

With another half dozen or so coins around the room being mulled by us as either varieties outside of our usual sweet spot, neat things that are just slightly more than we want to pay, or coins of types we already have sufficient inventory in.

This last category is always a challenge, since we hate to pass on cool coins which we know we actually do want and can sell eventually, and which won’t be easy to find when we do need them. Which is of course just another reason to buy everything when we have the opportunity and sort it all out later.

Speaking of later, at about 5:45 we packed up to ready for the Kagin’s auction starting at 6 and decided at the last minute to participate online from the hotel to avoid any bid glomming (i.e. embolding others to bid by extending our own paddle in the air). And I guess this worked out well, since we bought our two main target lots reasonably and without incident in what was by all accounts a packed, enthusiastic and generally very strong session.

And then headed out for a late dinner at Del Friscos with a dealer friend before returning to the hotel, catching the tail end of the auction strictly for entertainment purposes and then collapsing from numismatic near-exhaustion.

Would be an apt description of the pace of activity at the show on Friday, as our sales at the table increased along with the rate of new purchases as the day went on.

How can we explain that? I think it is twofold:

And so when we had opportunities to buy coins that we liked, that fit the CRO plan and that were priced at levels that made sense to us, we snapped them up, which kept leading to other deals of other kinds with other people.

With the end result being some gaping holes in our inventory now replaced by an onslaught of new purchases here numbering at nearly 60 coins of all types, colonial to federal to world coins which circulated in early America to esoteric numismatic items, slabbed and raw, from crusty and original to blazing and lustrous, in collector grades to MS67, etc.

With some of those ready to be listed straight away, others destined for grading or CAC in a numismatic symphony which will probably take most of next week to sort out.

And we still have one, loooooong day yet to come in which we’ll check out of the hotel, schlepp everything to the convention center, do as much additional business as can be done at this show and then take a late flight home and arrive, completely spent, in the middle of the night.

From where our final RR of this event will be penned from the comfort of my couch on Sunday AM.

“Great. I’ll give you a call next week” said the collector at the table who stopped by Saturday because he recognized the Weston, MA town name on our booth sign.

Sometimes that’s all it takes to make a new contact and potentially start a new business relationship.

Or miss one, if the random town name on the booth sign next door is more familiar.

Just one more reminder of the incredible randomness and inefficiency of the coin market, where the coin you have been waiting 12 years to acquire might be sitting unbeknownst to you in a dealer’s case in the next aisle, or the guy I spied walking around the show with the fresh collection of choice early type coins to sell might not realize an enthusiastic buyer of said deal is just steps away (unless your author flags him down in the aisle, which I did).

Or how a high-end world coin could suddenly appear on Saturday afternoon in the case of a silver dollar dealer who has, to the best of our recollection, never offered such an item before.

Which is why we always try to be pretty much everywhere all the time, working the table, but also racing out to check and recheck other dealer cases throughout the show, even on late Saturday afternoon looooong after many other dealers had packed up and left.

Where we bought every single additional CRO-style coin we could find, which on this day was another half a dozen.

But also spotted interesting new things not exactly in our specialty, some of which we thought could be worth buying too. If we really weren’t sure, we called on some expert or other for input or a sanity check since by now we have a w-i-d-e network who can help with most any numismatic specialty, and then bought or passed based on that input.

So by the time we left late Saturday we were confident we had done everything physically possible to buy and sell here before settling in for a nice 5+ hour wait at the airport for our late evening flight home. Which we avoided by just barely getting on the previous one which was fortunately delayed just enough so we could still catch it and get home at a reasonable hour.

Giving us that much more time to reflect on what was a surprisingly productive ANA Mid-Winter show, and then sort out everything we bought here, send things out for photography and get ready for our next EB which will go out on March 21st.