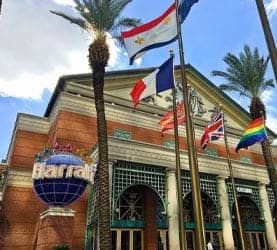 Having arrived in NO on Tuesday evening, Team CRO was rested and ready for action first thing Wednesday.

Starting with the lavish PCGS breakfast in the ante room, followed soon after by a quick set up of our 2 bourse case display containing an abbreviated (but hifalutin) assortment of the CRO inventory heavy on US coins, big on colonials and with a dash of world coins and esoterica thrown in.

After which we filled out 42 grading forms, developed a case of writer’s hand cramp and submitted everything we brought with us.

And then quickly checked out everything everyone else brought, scouring dealer cases, poring through boxes and finding a surprising number of coins to buy of many types and sizes:

With a couple of others we were seriously considering and might yet buy depending on what else happens here.

Followed of course by lunch, with the cinnamon tea and authentic local gumbo the star of the show, even though I might have been a bit too aggressive with the tabasco in an attempt to warm up in what is an extremely over-air conditioned bourse room here.

And then we were on to Legend lot viewing, where your author ram-rodded his way through 24 lot boxes, viewed every coin, ID’d a few of high interest and admired others more like a tourist on a numismatic sight-seeing vacation.

Followed by more coin viewing at other dealers’ tables, a few more purchases, some showing and telling, a few sales and one trade in what was a generally productive afternoon made more comfortable by MaryAnn running out and buying me a sweatshirt that neither of us ever imagined would be necessary (since it is about 85 and humid outside).

With the show winding down around 5:30, at which time we headed out for dinner with an industry friend to Muriel’s in the Garden District, the very same turtle soup and stuffed mirlitons restaurant referenced in our 2013 ‘Star Trek Transporter Beam’ TYIR article.  If you come here, we highly recommend it (the restaurant, not the transporter beam).

After which we called it a night in anticipation of what we hope is a busy Thursday here in the Crescent City.

And if it is, or even if it isn’t, we will describe everything that happens right here on Friday AM.

Today was the day.

After weeks of anticipation, multiple emails, 43 strategic discussions and possible rendezvous times and locations considered, we would finally be meeting here in NO with an antique dealer who had recently found a rare colonial.

Because when he did find it, he did some frankly impressive online research, which would ultimately lead him to our website and start those aforementioned wheels in motion. Culminating with his intention to come here, show us the coin in person, and, we hoped, sell it to us.

And we are pleased (and a little bit surprised) to say that that actually happened, that the coin is now in our back case, and that transaction alone will have made our decision to come to this show worthwhile.

But of course that’s not the only thing that happened here during another day of pretty decent buying and sufficient selling, our first few grading results trickling back, epic eating and of course some high level schmoozing with local attendees here.

Followed by dinner with some coin friends at the superb Café Amelie, a restaurant we only discovered on our last trip here by seeing a long queue of people waiting to enter a courtyard on Royal St. and us just deciding to get in line with them. Hey, sometimes you just have to go with your gut (literally).

With the dinner conversation interspersed with some alternatingly satisfying and disappointing evening Legend auction results in which we bought a couple of the things we wanted, but were shocked to be outbid on a few coins for customers that we flat expected to win. Oh well.

And then strolling back to the hotel in the warm weather through the waves of tourists while the rest of our party headed to another restaurant for a dessert of Bananas Foster, which, at that point, there was just no possible way I could have eaten.

So instead we came back here, answered email, bought a wicked coin off Ebay for a customer and then turned in so that we would be ready to wind it all up again here on Friday.

With our next RR to be posted from the comfort of home on Saturday AM.

Let’s conclude this show RR with a list of the most exciting things that happened to us on Friday in New Orleans:

Though not before reflecting back on what was another entertaining, generally quite productive and of course delicious 3+ days in New Orleans, and another fine coin show experience.

But we won’t be having one next week, as family commitments of the college graduation variety will cause us to miss our first Baltimore Expo in y-e-a-r-s (though we’ll still be bidding in the auctions, active online and reachable by phone and email, as always).  This also means that our next RR will not be posted until we get to the LB show in early June.