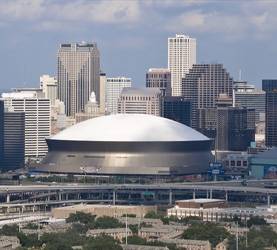 After a terribly relaxing 8-day break between shows during which we did an Early Bird, sold a bunch of cool coins, bought some amazing things and screamed at American Airlines for in excess of 4 hours, it’s time to once again hit the road, this time bound for the great city of New Orleans (our first visit since October of 2013 when your author flew down for the day to deliver a Willow Tree Shilling and have lunch in the French Quarter).

But this time will be different in several ways:

With every single thing that happens to be described to the hilt, right here, each and every morning of the show.  Starting tomorrow.

Our timing was impeccable on Wednesday, as Team CRO arrived at the 2nd floor Vieux Carré room here at Harrah’s just as the hotel staff put out the breakfast buffet.

So of course we dove directly in, then began the serious business of setting up our table space consisting of a case of wicked US coins, a case of high end colonial and esoteric issues, and including some new coins acquired as recently as Sunday which looked like this: 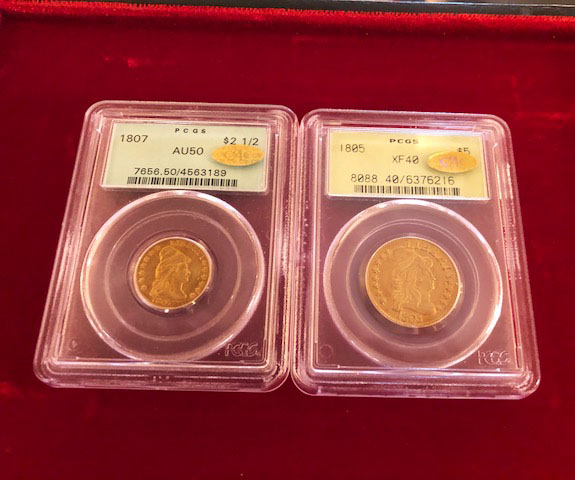 And then making our first sale of the day not 3 minutes later to a nearby dealer.

Followed by our first purchase, yet another cool and extreeeeemely old-holdered coin of the sort that we have become known for.

Which was a harbinger of things to come on both counts, as business was pretty good, especially considering that this is an intimate affair with just about 25 tables and, at least so far, a bunch of (primarily) local attendees.

Proving once again that at shows size rarely matters, and good business can happen anywhere a customer meets a cool coin (with sometimes that customer being us).

Also on this day was of course coin grading, as we submitted everything we had whenever there was an empty seat at the PCGS table (which was not often).

It wasn’t often at the Legend lot viewing table either, which your author will hope to rectify with some high speed viewing on Thursday. That’s fine, since most of the coins of interest to us in this auction are in the Thursday evening session.

And then, all of a sudden, it was time to head to dinner with a collector friend at the well-chosen Court of Two Sisters restaurant where we sat in the outdoor courtyard on a balmy evening.

Before heading back to the hotel to get some rest for what figures to be an entertaining Day 2 with more collector attendees and, we hope, more action at the CRO table.

Thursday would begin crisply at 8 AM with our requisite once-per-NO-trip visit to the original Café Du Monde location, a 15 minute walk from our hotel in what was already impressively hot and humid weather even at that hour.

With every other person on that sidewalk seemingly heading to that same destination.

And who could blame them? Those beignets are certainly worth the trip, though if you go there I’d highly recommend wearing a white shirt to camouflage the inevitable Kīlauea-like eruption of powdered sugar: 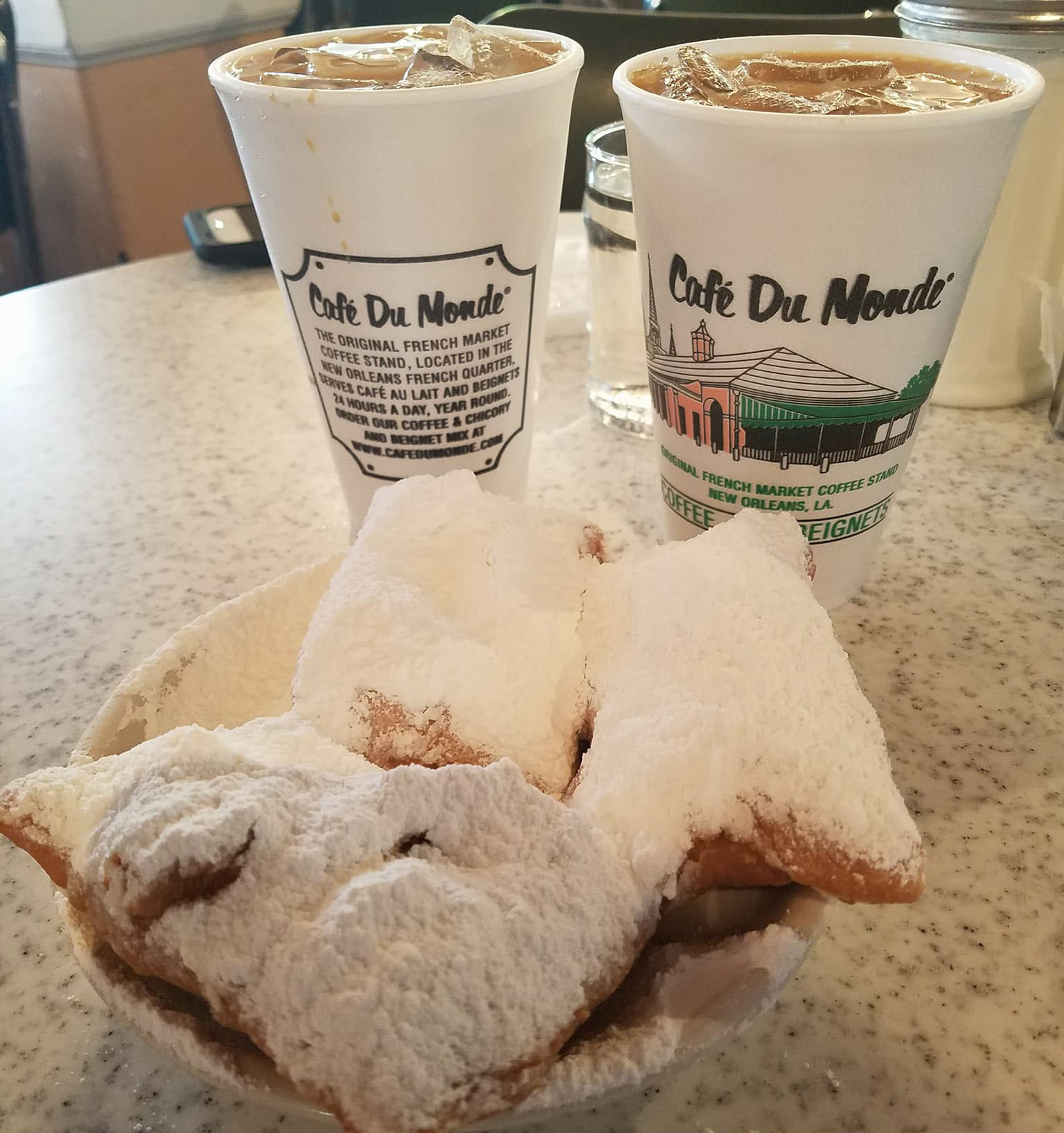 After which we headed straight to the show, clicked on the lights at the CRO table and immediately sold a US coin to the first customer to arrive.

Which would turn out to be one of half a dozen sales on Friday, in all categories, ranging in price from about $150 to the high 4-figures.

We had an equally good day buying too, with a number of neat, new US type coins and some very interesting high-end colonials one might not have expected to find at a show like this (and would not have, unless someone specifically brought them for us like they did).

All good outcomes achieved in and around Legend lot viewing where we circled a bunch of cool things to bid on while schmoozing with dealer friends, long-time customers and new friends in a relaxed numismatically social setting where no one could claim to be underfed.

With the only unsuccessful outcomes during the day occuring when some ‘not exactly in the CRO wheelhouse’ coins were offered to us by a series of walk-up visitors. Of which we picked out the most interesting items and made realistic offers which were summarily rejected, including by one person with a group of Latin American gold who was adamant that he could “get more selling them on Ebay”. I did not disagree with that assessment, since that is actually what I was thinking to do with them if the owner had accepted our price.

After which it was time to dive into the Legend session, where we participated online starting at the table and then eventually migrating to our hotel room, variously being nipped or swamped by other bidders in what seemed to be a generally very strong session.

And then heading out to dinner with some coin friends at K-Paul’s, a New Orleans tradition so authentic that we could understand only about 25% of what the waiter was saying. It didn’t seem to matter though, since even if he brought the wrong stuff it was amazing.

Followed by a brisk walk back to the hotel, a couple of customer phone calls, answering a bunch of emails and then calling it a night so we could be ready for what figures to be an entertaining Friday during which we hope to see the first of our show grading results.

And then writing all about them and everything else that happens in our next installment of the RR on Saturday AM.

Friday would be a bit different, starting with the sort of relaxed conversations with industry professionals, dealers and collectors that aren’t usually possible at other shows.

But here it was as we hung out in the show lobby for a while before heading into the bourse room at about 9:30 and beginning another day of unhurried coin showing, coin seeking and what we hoped would be excellent coin grading result retrieval.

And while that last one did not happen (yet), we did better in the other two areas, adding a few more interesting U.S. type coins to our haul, selling a few moderately priced coins and then finalizing a deal for the 1805 $5 shown here a couple of days ago.

In and around meeting a couple of long time collectors, handing out business cards, showing them the site and, possibly, bringing some new customers into the fold.

All of which added up to a surprisingly, delightfully productive day here in New Orleans on Friday interrupted only by a wicked thunderstorm in the late afternoon, with the rain continuing on into the evening and forcing Team CRO to run to a nearby restaurant for dinner, rather than stroll through the French Quarter as we planned.

And then returning to the hotel not too late so we could answer email, track down a delayed package and talk to a few customers before getting ready for Saturday.

Though we’d frankly be very surprised if there was more action here on Saturday, since many of the other dealers departed at end of day Friday, with others remaining just to receive their final grading submissions and the room to be disassembled early in the day.

But you never know, and if anything interesting does happen it will be faithfully reported here in our final RR from NO on Sunday AM.

Just some of the interesting things that happened at the New Orleans show: 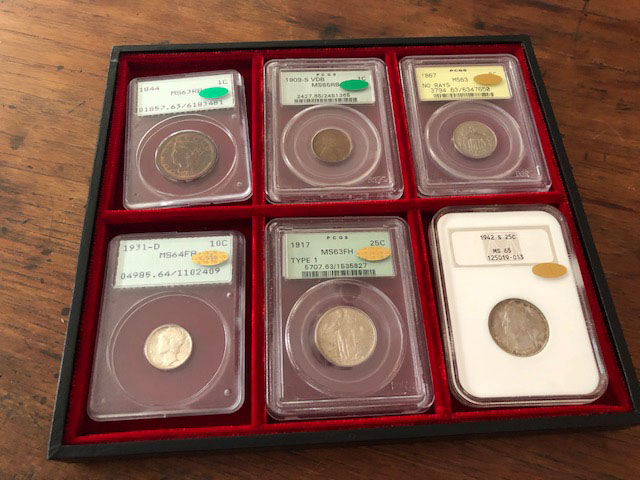 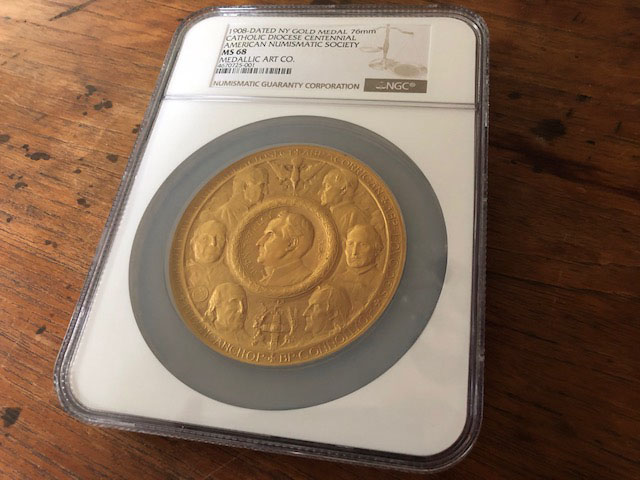 And now back home it’s time to get some rest, get organized and get a lot of new coins imaged for our next EB to be held on May 29th.  So you might want to keep an eye out for that –