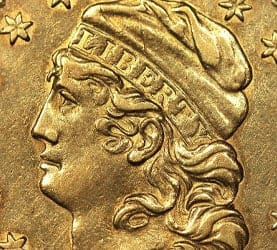 An Original Work of Numismatic Non-Fiction by Dave Wnuck.

Shhhhh. Don’t tell my wife, but I’m in love with another woman.

Fact is, I’ve been infatuated with her since the age of 12 (though at that time I divided my attentions between her and Ms. Ginger Grant from Gilligan’s Island ). Mine is a May-December romance, in the mold of Demi Moore and Ashton Kutcher, what with her being 170 years-old and all.

But her age doesn’t matter to me since it wasn’t her beauty that won me over. That’s good, because she has the apt nickname of ‘Fat Head’. Looking at her from her thick, offensive lineman neck to the tip of her unflattering fabric cap, many would say “She’s no Scarlett Johansson”. But perhaps I can get you to see her through my eyes.

The Capped Bust, Reduced Size $5 gold coin was struck from 1829 until 1834, and produced in fairly large numbers. But specimens are almost nonexistent today. How come? Wholesale, catastrophic melting by the gold dealers and exporters of the 1830’s.

You see, it says, ‘Five Dollars’ on the back of this coin, but almost from the start they were worth more than that in gold. So exported and melted they were such that all six dates are seldom seen today. And two of them – the 1829 Small Size $5 and the enigmatic 1832 Twelve Star $5 – are among our nation’s rarest coins.

How the Affair Began

When I was growing up, I had the good fortune to live 25 miles from a major coin auction house. I would beg my father to let me go to lot viewings there so I could see and learn from the rare coins being offered. I couldn’t begin to afford most of them, of course, but I figured that one day I just might be able to, and I wanted to be prepared.

And while I saw a lot of rare issues and really cool coins in dozens of auctions over the years, they never had one of these.

Until that fateful day when one appeared in one of their sales. And I was transfixed from the start. I remember examining it under various lights, studying it under a magnifying glass and literally memorizing the surfaces. I probably spent 30 minutes examining the rims and edges alone, and literally counting the reeds (I’m not making this up) until the staff told me they needed it back since someone else wanted to view it. In retrospect, they probably thought I was absolutely crazy.

I was. Crazy in love (numismatically speaking).

Flash Forward to the Present

Well, I grew up, had a reasonably normal life for a while, then I became a coin dealer. And while that thing with Ginger Grant didn’t work out, I never lost my (admittedly slightly weird) fascination with the Fat Head Five.

And through the years I’ve probably spent as much time looking at and studying this issue as most anyone. And I have come to recognize the distinctive and unmistakable look of the truly original survivors, with their cascading-and-swirling luster and that specific, frosty gold color not unlike what you see on a high grade 1878 $3 gold piece.

Unfortunately, the coins which exhibit that ‘look’ have slowly vanished through the years and more and more of the stripped and conserved examples have taken their place.  But when I see one that is original, it is instantly recognizable.

And when such a coin comes up for sale – either at auction or privately – I fight hard to buy it.

Such as a few weeks ago, when we saw a truly original example, one of the nicest ones I’ve seen in 5 years or more. And I didn’t hesitate. And while it’s a lot of fun to own, and brings back all of those great memories of this issue, it will likely be gone before too long. Most likely (based on my past experience) it will end up being purchased by a collector for a top notch US Type set. And, most likely, this will be one of the very last coins they need.

But in the meantime, I get to hold this coin in my hand, twirl it around in the light and remember why I loved this issue so much to begin with. It’s a sort of magical thing I can’t explain, but to me this is a big part of what true numismatics is about.