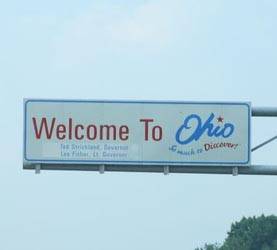 Good morning and welcome to this first installment of the EAC RR written before we depart for this not-that-easy-to-get-to event located outside of Columbus, OH.

And once we eventally get there, we expect a rip-roarin’ good time surrounded by serious collectors, cool coins and numismatic discussions which in some cases will probably be too deep even for a guy who does this for a living (such as your author, for example).

The good news is that these events contain something for pretty much everyone (as long as ‘everyone’ is defined as serious collectors who really like looking at and discussing early coins).

So if you are lucky enough to be in attendance, I look forward to seeing you soon.

But if you can’t make it, do not fret – I will be recapping this event in greater detail than usual right here in this space each and every day of this show.

After an hour or so delay we (me and a bunch of other dealers from Massachusetts who happened to be on the same schedule) boarded the one non-stop flight available, jetted directly to Columbus, enjoyed an $89 cab ride to Newark, OH and checked in to the Cherry Valley Lodge.

First reaction: “Hey, this is kind of a charming place conveniently located smack dab in the middle of nowhere.”

2nd reaction: “There are a lot of familiar faces milling about, all on necks around which are EAC badges.”

3rd reaction: “This feels sort of like Numismatic Summer Camp, except with alchohol.”

So I immediately dumped my stuff in the room, zipped down to the bourse floor and was shocked and delighted to discover that my name was on the list of attendees AND printed in the program (which I did not expect, since I screwed up my arrangements for this show, failed to sign up for a table and ended up having to beg for some space from collector friend Tom Turrisini at the last minute, who accommodated me in a big way, giving CRO a full case large enough to hold my specially selected EAC offering).

Once set up, I toured the room repeatedly, finding a few interesting things to buy and a few deals to participate in with others.

But before we knew it, it was 5 o’clock and the end of dealer set-up, so we all relocated to the bar for an hour of interesting coin talk.

Followed by the formal (in structure, not attire) EAC reception, including a cash bar, an appetizer buffet, and an extremely poorly designed queue that lead to both in succession, resulting in a long line of us down snaking down the corridor wondering what the hold up was.

We eventually made it though, dining and talking coins up until 8 when the various “Happenings” (small discussion groups on a variety of numismatic topics) began.

As usual, I headed into the colonial room for some interesting show and tells, including a presentation by collector Bill Jones who brought this choice and well pedigreed Maryland Lord Baltimore Sixpence: 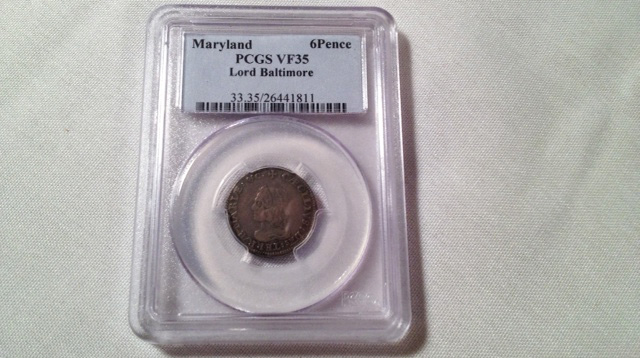 And then impressed all of us by recounting the entire interesting history behind it from memory. That was cool.

Eventually things wound down, and I headed to the room after what had been a most pleasant but very tiring 22 hour day.

Tomorrow the show begins in earnest, and I will look to buy and sell with equal fervor.

With the bourse opening early around here (at least compared to other shows on the circuit), I was up and out at the crack of 7:30 AM stopping only for a quick breakfast in the hotel restaurant. In theory.

You see, this is a charming place and all, and the waitress was a real sweetheart, but they aren’t going to set any speed records in the kitchen. They will not score that well for accuracy either, since they brought the wrong food to each of the four (4) people at my table.

It was pretty tasty though, and we were all feeling fine as we strolled the 13 steps down the hall to the conveniently located bourse floor.

And while the crowds were not huge by coin show standards (not that one would expect them to be at an event like this), the floor was pretty full pretty much all day, with just minor ebbs during the lunch hour, and during some of the various talks and presentations going on down the hall during the afternoon.

With pretty much everyone here a serious, knowledgeable collector looking for choice material.

And they were finding quite a bit to choose from in a room filled with choice colonials, federal copper and early type of the ‘for sale’ variety interspersed with interesting coins on display, some of which would make the Smithsonian blush.  Like this: 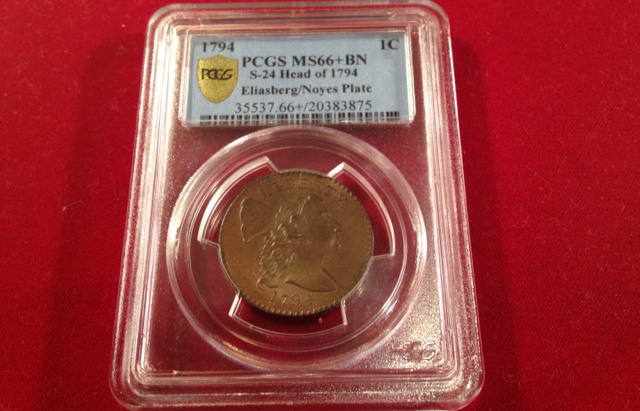 Just as interesting as the displays were the people, including many collectors I’ve known for years, but also new acquaintances, including the famous Conder101.

For those that do not know, Conder101 (not his real name but rather a nom de plume) is inarguably the world’s foremost authority on coin slab types, having published a book on the topic as well as some profusely illustrated chatroom threads identifying the various ‘generations’ of slab design. And since these efforts have done more to foster the development of rare slab collecting than anything else, I was surprised to learn that he himself “hates slabs” and collects raw coins. Hmmm.

I also met a gentleman for the first time who had been a frequent visitor to the website and who informed me that (and I quote) “Based on your Road Reports, I always figured you were a crotchety old man like that guy in the animated feature ‘Up!’ with the balloons on his house.” So that was nice.

And how’s business, you ask?  Well, CRO has not set any new sales records so far, but it was pretty decent overall, with the hopes that something really good may yet happen on Saturday.

And if it does, or even if it doesn’t, I will post about it right here on Saturday AM.

By Saturday we had slipped into a nice routine here at the Cherry Valley Lodge, waking up early, allowing the requisite hour and a half for breakfast, getting to the bourse floor and then continuously circling the room for buying and selling opportunities all day.

Of which I found some of each at a show which turned out to be a blast socially and a solid B commercially.

Though, as usual, I never know what coins will sell in what sequence at what venue. If I did, I’d have included more world coins in my smaller-than-usual-space-constrained-EAC-inventory since they seemed veeeeery popular here. Why? I don’t know for sure, but one could surmise it was the lack of direct competition in similarly high grade pieces.

So while a would-be buyer had a choice of three (3) nice Chalmers Shillings in the room in XF45, XF40 and VF30 respectively (the latter being mine), and XF Classic Head Cents seemed to be everywhere, I believe I was the only one here with (until I sold them all) some mint state Latin American gold coins and a deluxe Central American Republic 8 Reales which sold before making it to the website: 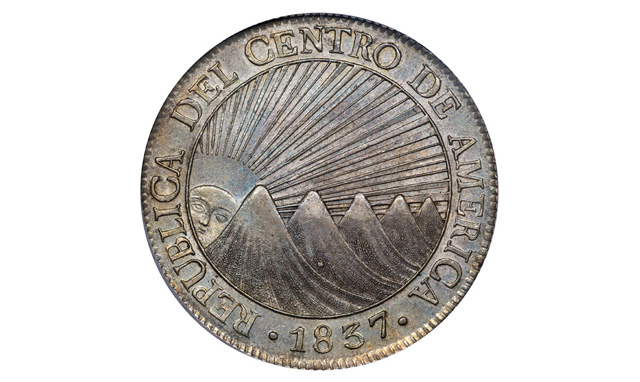 And while a couple of other potential sales / trades which seemed possible earlier in the show ultimately did not happen, the show ended on a high note with the sale of a thoroughly pondered Vermont copper just before packing up.

After which I headed out for dinner with some collector friends at one of the charming old Inns near the hotel, enjoying another wonderful meal, getting lost on the way back to the hotel, but eventually making it here just in time to say so long and see you next year at the 2014 EAC in Colorado Springs.

But not before I make a quick correction to yesterday’s RR in which I said that slab-researcher Conder101 “hates slabs“.  After a subsequent discussion with him on Saturday, it would be more accurate to say that he “Really, really hates slabs”

And now I have about 2 days to refresh and recharge before zipping off to the ANA in New Orleans where I will plan to bring the entire CRO inventory with me since I will have no shortage of room to display it and, of course, I have no idea what will be most popular at that venue.