May 2-6, 2012: The Early American Coppers Convention in Buffalo, NY 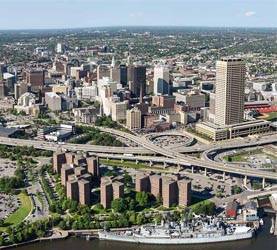 While it would have been nice to wake up Wednesday, have a leisurely breakfast and then calmly fly to Buffalo, it turned out to be one of those ridiculous mornings where nothing goes right, you can’t find your phone, and the incredibly important box of coins that was shipped to you and that you desperately need to take with you to EAC has not yet shown up in your PO Box when you go check at 7:30 AM. Aargh!

But ultimately everything turned out OK as I got everything done, found the frickin’ phone, picked up the late-arriving box at the Post Office with 20 minutes to spare, and then headed to the airport completely and totally ready for some high quality EAC action.

My enthusiasm may have gotten the best of me, though, as I got to the airport about 2 hours early and then sat in a restaurant cooling my heels.

The flight was good though, and brief, and as I waited at baggage claim in Buffalo I ran into a few other coin guys, so we all jumped into a taxi van together and headed off to the hotel in the heart (I think) of downtown.

1st observation: The city looks pretty much exactly like it did when I came here in graduate school in 1991.

2nd Observation: The Adam’s Mark looks exactly like the image on our homepage, though in reality it is farther from the water and closer to the highway, as evidenced by this large truck that just passed approximately 11 feet from my hotel room window: 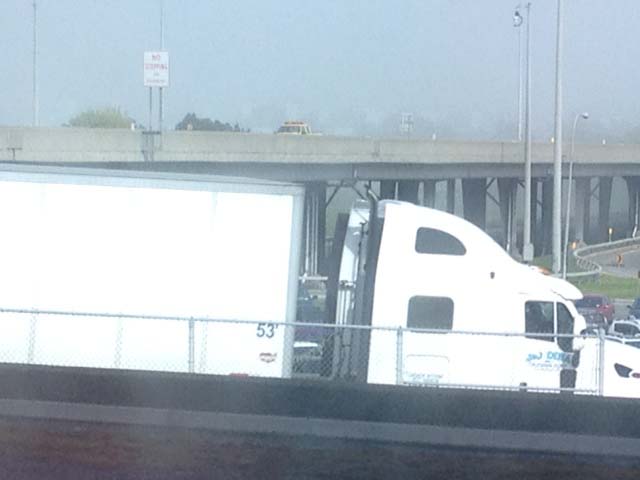 3rd Observation: Everyone you meet is very nice.

4th Observation: First time I’ve ever seen a vicious police dog in the Security Room (here seen looking hardly vicious at all on a ‘walk-y’ break with Sheriff Burdzy): 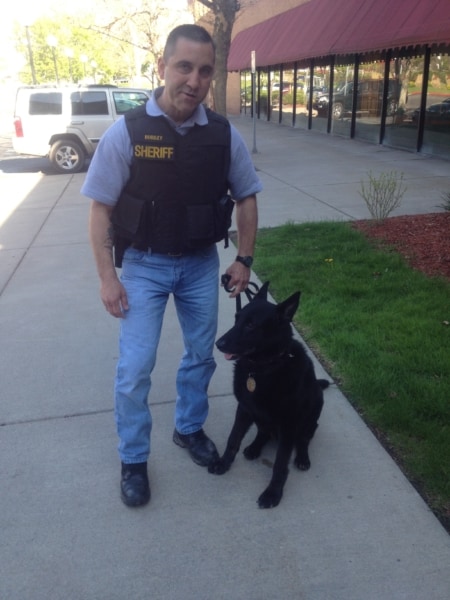 5th Observation: This looks like a good set-up, with my room, the show and all the events right on the same floor, and a big open bar / restaurant on the 1st floor where we all ended up congregating for dinner where guys were eating while passing around raw copper coins, none of which got any food on them (as far as I could tell).

Which continued up until about 7, when most everyone went upstairs for a meeting of the “Boys of ‘94” (a group of avid collectors and researchers of 1794 Large Cents) for some discussion, much of which was interesting even for a non-specialist (such as your author).

Where I stayed for a while, eventually leaving to answer email and turn in semi-early so as to be ready for what I anticipate to be a busy day on Thursday which will include dealer set –up from 1 to 5, and lot of meetings, discussions and totally cool show and tell sessions afterward.

All of which will be described in detail, right here, tomorrow.

Though the bourse floor would not open for dealer set-up until 1 PM, people started congregating outside the room at about 10, talking coins and milling about, indicating to me quite a high level of enthusiasm for EAC 2012.

So by the time we finally got in there, I was ready for action, a feeling only heightened by the fact that (for the first time ever at an EAC) there were 3 cases instead of 2 waiting at our table, working locks with a key that fit into them, and (and this is the part that shocked me) functioning lamps AND clamps that actually fit on the tables to hold them up. Also, the space allotted to CRO was vast, with a giant back table and plenty of room to move around.

If all of this sounds like a sharp critique of the set up at previous EAC’s, it’s not really – just an observation that some of the past events felt more like a coin club gathering as opposed to well-oiled numismatic coin show machine. Do you know what I mean?

And then I spent the next few hours sorting out inventory and making sure everything had a price sticker on the back (something I should have done before arriving, but never got to). In the midst of which I sold a few coins, after which I toured the room several times buying 6 coins from 6 different dealers and pondering a few others. Nothing really big or expensive though – just nice wholesome colonials and US type.

There was also plenty of time to talk to other dealers and catch up with guys I have not seen in about a month and a half since Baltimore.

And then, suddenly, it was 4:50, and they announced that the bourse would be closing in 10 minutes and the wild dog unleashed (literally, I guess) into the room. So everyone had to clear out.

After which we all continued talking / schmoozing / drinking in the hotel lobby bar for an hour until the EAC reception started at 6 in the “Fountain Room”, where all the collector attendees (and a lot of spouses) joined us for a pretty darn good buffet dinner, a well-stocked bar and more numismatic conversations of all sorts.

Until about 7:45, when people started heading upstairs for the various “Happenings”, separate discussions, show and tell sessions and presentations in different rooms covering Colonials, Half Cents, Large Cents and Early Type, all of which seemed as well attended as they are every year.

I visited every meeting but most of my time was in the Colonial room (not surprisingly) where some interesting things of all sorts were showed and discussed, including this choice 1787 Nova Eborac Large Head with unusually nice golden brown color handled by us several years ago: 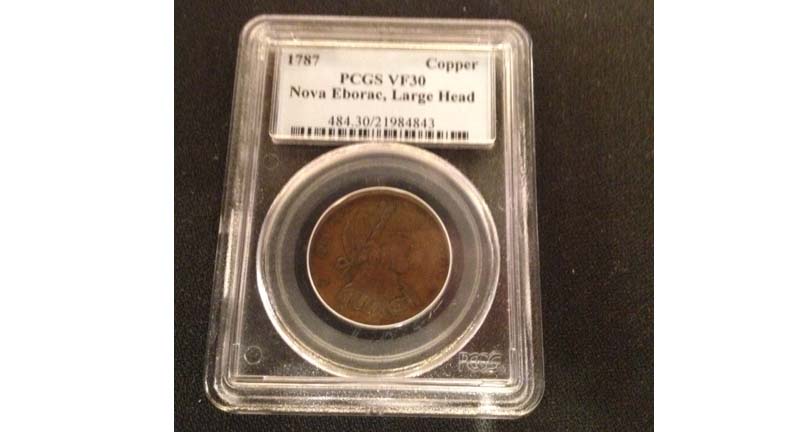 And another deluxe 1787 Connecticut Laughing Head ex-Taylor (also handled by us several years ago).

Followed by a 1787 New Jersey ‘Camel Head’ presented by collector Frank Jozapaitis and notable for its extremely heavy weight indicating it may have been struck over a French Sol of the period, something I certainly have never seen or heard of before.

But to me the evening’s most interesting presentation was by Brad Karoleff, who showed a photo of a previously unknown example of an extremely rare 1786 New Jersey ‘Date Under Plow Beam’ Maris 7-E variety engraved on the reverse SAM PEEL 1858 which had been discovered in the cornerstone of a Cincinnati building erected in in that year. How cool is that?

And then I called it a night in anticipation of a long day on Friday during which the collector attendees will storm the bourse floor and coins will be bought and sold at a furious pace. I hope.

Whatever happens you can read about it right here on Saturday morning.

As I walked down the corridor from my hotel room, passed the glass-walled indoor swimming pool and arrived at the not-yet-open bourse room on Friday morning, I was pleased to discover a totally unexpected, absolutely free and very timely (since I had not eaten yet) coffee and bagel buffet just sitting there waiting to be attacked.

So I did, enjoying a very quiet breakfast with several other dealers during which no one was talking because they were busy chewing.

After which we poured into the show and started getting set up in anticipation of the inevitable onslaught of collectors who would all burst in to the room when it opened to collectors at 9 AM.

That didn’t really happen though. It was more like a steady stream, and while there was good activity on the floor the crowd never seemed anywhere near as large as it was at the reception dinner the previous evening (a phenomenon I have observed at previous EAC shows).

Which begs the question: where do all those people go? I don’t have any idea, actually, but I guess that a lot of them were spouses or others accompanying the actual collectors, and that those people don’t come to the show. Either that or dozens and dozens of people crashed the dinner, ate the free food and then left, which would be unfortunate, and might necessitate having the bourse-floor-protecting vicious police dog stationed at the reception in future years checking ID’s.

But while the bourse was not exactly bursting at the seems, CRO did pretty well, amassing a handsome group of NEWPs purchased as single coins from many different dealers, and selling a few more coins in all categories, including a very attractive XF Fugio 17-S variety which we just acquired recently and put out for the first time at this show.

Despite that, so far we have sold more silver and gold coins here than copper, which probably means something though I do not know what it is.

On the other hand, I later learned that at least one 6-figure+ copper coin has changed hands at this show, so copper seems to be doing OK too.

I got to see some cool things too, like a distinctly ‘old school’ Half Dime collection of the sort you would only see at a show like this: 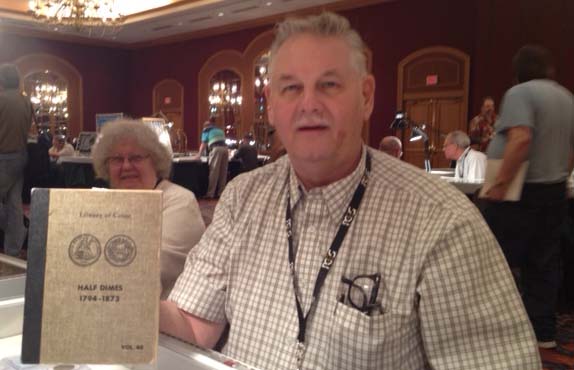 And then, once again, the end of the show came up very suddenly, with a 10-minute warning announcement followed by a loud bark of the aforementioned dog which hastened everyone’s departure to the bar for another round of drinks.

After which I headed out to a local restaurant with 2 dealers and 1 collector and had a blast experiencing local Buffalo culture (despite the food being extreeeemely mediocre), before heading back and turning in pseudo-early to watch the tail end of the Celtics game.

Saturday I expect a bit more action that at a regular coin show before I head home, from where our next RR will be posted in about 24 hours from now (and will, If possible, include more photos of cool stuff I saw here).

Saturday began in super-deluxe fashion, as I made some historically bad coffee in the in-room coffee pot, drank it anyway, packed up everything, checked out of the hotel and then made my way to the bourse room.

And while I thought this might be a busier and more action-filled day than a weekend at a “regular” coin show, it didn’t really turn out that way.  Despite a decent crowd of the serious EAC-attendee dealers and collectors here, business was on the quiet side, with just a few sales and a few more purchase during the course of the day – and all of those of the moderate-priced variety.

Which seemed to be consistent with the experience of a lot (but not all) of the other dealers I spoke to at the show, several of whom had theories as to why:

Now, while those points all seem plausible to me, I’m not sure any of them had any direct or even indirect impact on our business here. It simply was what it was for us.

Which was a great time in western New York at a fun (small f) show with a lot of good collector and dealer friends at an event that was impeccably run and organized and well worth attending, even if we did not set any sales records, or buy anything truly stupendous.

And now we are back home for a grand total of 1 day before we hit the road for the Denver show, where we expect a totally different kind of a crowd in a nice venue we have not visited in several years.

From where our next RR will be posted in just a few days from now.